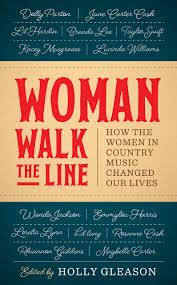 Woman Walk the Line: How Women in Country Music Changed Our Lives edited by Holly Gleason (University of Texas Press, 2017, 236 pages, $19.65) is a brilliantly conceived and executed project on which twenty-seven women associated with music as writers, producers, performers, or in some other capacity write about twenty-seven noted woman country and bluegrass performers chosen chronologically from Mother Maybelle Carter and Lil Hardin to Rhiannon Giddens and Patty Griffin. While much of the coverage seems to linger in the rich transitional period from the late sixties into the late eighties, from classic country to more rock influenced and overtly feminist takes on the importance of the artists, the scope of artists considered and the range of interests and backgrounds of the women writing the profiles is sweepingly broad.

The writers are both highly personal and deeply analytical, using their experience to enrich their understanding of artists and eras, thus rewarding the reader with much needed perspectives on the contributions of these marvelous women, not just at singers, but as cultural icons, too. The writing varies from luminous rock and roll journalism to self-indulgent self-puffery, but generally is of such high quality as to shine spotlights on the performers as well as their own era from a later and more highly self-aware historical perspective. The chapter on Hazel Dickens (written by Ronni Lundy, winner of this year's prestigious James Beard award for book of the year) called “Plangent to the Bone,” is worth the price of this book. Like the other chapters in this volume, it celebrates Hazel through her own life and its testimony as well as her effect upon the writer as both a woman and a musician/writer about music. As such it captures the rich interplay of experience between music producer and consumer in beautiful, sisterly language which crosses gender lines with, as should be the case in anything written about Hazel, scorching plain talk about love, life, work, and relationships.

The strategy of having women writers, many of whom are musicians in their own right (write) works in most of the profiles. Each contributor brings to life the character of the performer she writes about by examining the influence she wields on the the writer’s own life. Many of the profiles are the result of personal relationships developed through interviews, while others are written at a greater distance. For instance, Ali Berlow, a producer at Access Hollywood, writes about her deep sense of loss when her gay friend Dennis sends her home from Africa. Soon, he returns to visit, dieing of AIDS. She connects her own loss to Emmylou Harris’ career, based so much on the loss of her one great love, Gram Parsons. The duality works, deepening my own understanding of both women, and, in a larger sense, of women. Through the struggles for finding self, the writers are able to dig into the person inside the performer, struggling for expression and recognition in the male dominated world of country music. Berlow writes a paean to finding ones own voice as she allows Emmylou to give her permission.

Writing about Barbara Mandrell, Shelby Morrison says, “Barbara Mandrell helped to shape who I am, a confident woman, a woman who believes in herself. Barbara was in charge, she had a purpose and she inspired me to tuck my tiny Wranglers into my red Roper cowboy boots, cinch my belt buckle, crack my knuckles and get to work to find my purpose. She was everything I wanted to be.” In a sense, most of the writers describe a process and purpose much like the one Morrison explicitly identifies. Some use prosaic approaches, while others reach poetic heights. The essays vary in length and complexity. Each, however, tells almost (maybe more) as much about the writer as it does about the subject. If you’re looking for biography, look elsewhere. If you seek insight, revelation, and inspiration to boot, this is the book for you.

Each entry is an intertwining of a building relationship between a singer, for most of the women profiled are singers or singer/songwriters, and the profiler to create an intertwined portrait, like fine art and the artist. While reading, I realized these women were offering me more about their world, its glories and problems, than I had known, while teaching me how to write better about music as well as to listen to it more intelligently. Reading this book requires a new understanding of reading, since it asks the reader, no, commands the reader to become a participant in the enterprise. Many good readers do this anyway, but Woman Walk the Line helps define the line and then forces you to teeter along the tightrope with those actually having the experience. 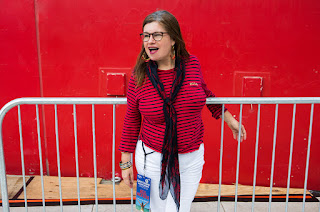 Editor Holly Gleason is a music critic, academic, and artist development consultant. Her work has appeared in Rolling Stone, the Los Angeles Times, the New York Times, HITS, Musician, CREEM, the Oxford American, No Depression, and Paste. She lives in Nashville. The contributors, too many to name, include poets, television producers, activists, teachers, historians, curators, Grammy-winners, and music critics. David Menconi, of the Raleigh News-Observer, is the co-editor of the University of Texas Press American Music Series, which published this remarkable book.

Holly Gleason, in Woman Walk the Line ( University of Texas Press, 2017, 236 pages, $19.65) has presented twenty-seven women who are country singers profiled by twenty seven woman writers each of whose experience has been enriched by they relationship to the woman they have profiled. The writers’ perspective in the contemporary world, young-middle aged, parent, child, straight, gay, trans, newbies, established, performer who writes, writer who performs inform, and are informed by the world in which they live and which they observe, just as the singer/songwriter seeks to do as a participant observer. What a way to develop postures toward the world of music! As the songs themselves move from abstracted reflections on life and love to increasingly personal and revelatory through, now, nearly 90 years of music covered in this marvelous volume, the book projects elements of society and changes in music that many might decry. Lovers of Maybelle Carter or Hazel Dickens may find themselves turning away from Taylor Swift or Kacey Musgraves as too self-revelatory. Loretta Lynn and Dolly Parton fans might decide that Lucinda Williams and Patty Griffin aren’t their cup of tea. But Holly Gleason has unleashed a lushly written, highly personalized book of profiles that captures the artists and the writers in revealing ways that make this book irresistible. I read the Woman Walk the Line as a digital download provided by the publisher through Edelweiss on my Kindle app. It gets my highest recommendation.


Please remember that if you order this book through the links on my review or the Amazon portal on the left side of my blog, I receive a small commission which helps support this blog and our travels to bluegrass events.