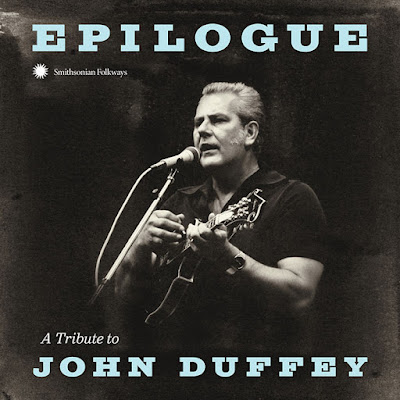 In the first paragraph of the over forty page liner notes booklet accompanying Epilogue: A Tribute to John Duffey, on Smithsonian Folkways curated and produced by Akira Otsuka, he writes, “In the mid-1960s when I was learning to play mandolin in Japan, one artist really stood out for me—John Duffey of the Country Gentlemen. He had an amazing tenor voice and unique style of mandolin playing. I tried to copy his breaks note for note—he was my idol.” This opening characterizes both the liner notes and, even more important, the content of the marvelous CD he has made, a labor of love for the past fifteen years. It’s tempting to quote extensively from the history of Akira’s relationship with John Duffey, the legendary tenor singer and mandolin player for both The Country Gentlemen and The Seldom Scene, but I’ll leave it to you to fill in the details. Suffice it to say that reading and studying the liner notes can only serve to increase the pleasure of the wonderful songs selected for this recording, sung by some of today’s most prominent bluegrass musicians.

Written by Akira, veteran D.C. deejay Katy Daley, Seldom Scene stalwart Dudley Connell with Track Notes by Jeff Place, the liner notes are worth the modest price of the CD or the digital download ( https://amzn.to/2KdK7pB) and can be downloaded. For collectors, this is a “must buy.” Akira, who first arrived in the U.S. in 1971 for a U.S. tour with the Japanese bluegrass band Bluegrass 45 was brought here by Dick Freeland of Rebel Records. The recording, begun as a project of Ronnie Freeland, Dick's son, and Akira in a hotel room in Owensboro, KY., contains seventeen songs notably connected to John Duffey. All told, fifty-three musicians contributed to the recordings over a many years’ period. For those of us who never met or heard John Duffey live, Katy Daly’s profile is a revealing masterpiece. For instance, Daly comments on Duffey’s onstage demeanor, “Equally influential on John’s onstage persona was Johnny Carson of The Tonight Show. Duffey studied Carson’s monologues, quips, and emcee work and then made them his own. His humor was aimed at the urban audiences that came to their shows. It was current and over-the-top.” Along with Dudley Connell’s essay on his own joining the band and relationship with Duffey, the liner notes provide historical context to bluegrass in the Washington, D.C. area as well as the growth and development of bluegrass music more generally.

John Duffey (1934 – 1996) was one of the most influential musicians in the development of bluegrass from a regional variant of country music to an increasingly urban and urbane sound relying with increasing emphasis on folk music from the folk revival of the sixties and seventies along with jazz and rock & roll music. As the founder of two of contemporary bluegrass’ seminal groups, The Country Gentlemen and The Seldom Scene, and as a dynamic, witty personality with a distinctive voice and personal style, Duffey’s continuing influence on the popularity and development of the genre and it’s broad appeal cannot be overestimated. With a vocal range of over four octaves and a seemingly unhinged sense of humor, echoes of his voice are found throughout the genre. Now bluegrass standards, many of the songs he introduced to bluegrass were revolutionary at the time. He wrote “Bringing Mary Home,” and was associated with songs like “Hickory Wind,” and many others. He helped bring the music of Bob Dylan into bluegrass.

Here’s a version of “Wait a Minute” with Duffey singing during the Phil Rosenthal period, probably sometime in the late seventies to mid-eighties.

Recorded and assembled over a period of fifteen years, Epilogue smoothly brings together many musicians from early Country Gentlemen and Seldom Scene aggregations, combining them with some of the finest voices of bluegrass of the twenty-first century in seamless and wondrous combinations. The CD features, for instance, Randy Waller, son of Country Gents great singer Charley Waller, with current Seldom Scene tenor Lou Reid on “Sad and Lonesome Day.” Amanda Smith, Jonathan Edwards, Dudley Connell, Sam Bush, James King, John Cowan and more. Fifty-three musicians in all, appear on the present recording, all singing songs closely associated with John Duffey. The recording values are evocative and stunningly inventive in their tribute to John Duffey, his singing and his instrumental work. Sadly, it’s not possible to represent his iconoclastic stage personality and electric presence.

Here’s another clip recorded at a festival in Louisville, KY in the md-eighties that captures some of his virtuosity as well as the stage presence that captured the imaginations of so many, including Akira Otsuka. 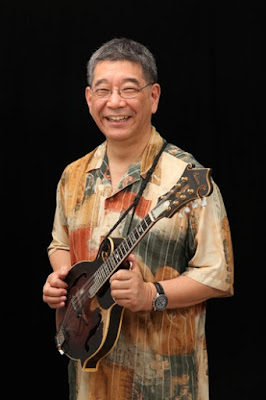 Akira Otsuka, the creator and producer of this fine tribute to John Duffey, was associated with him from their first meeting in Dick Freeland's living room, at festivals, through tours to Japan, collecting and preserving John Duffey’s mandolins and, now, his music. Here’s an interview recorded with Tara Linhardt which gives further insight into both Duffey and their relationship, in which he serves as Duffey’s Boswell.

Epilogue: A Tribute to John Duffey is a labor of love and admiration assembled and produced over a period of fifteen years. It also represents a picture of the movement from the mountains to the suburbs as rural and mountain people moved from the hills to the mills to the cities and suburbs following new opportunities due to the industrialization of farming along with the rise of digital technology and big government. The Baltimore – Washington axis arose and the composition of The Seldom Scene represented the change: a physician, a cartographer, a mathematician jamming in the basement and avoiding travel because of their other commitments. Now, the spirit of John Duffey, through the recreation of songs he’s noted for singing, lives on in this recording, while the originals can be heard in online streaming services and seen on YouTube. As Akira said, ““It’s hard to believe John Duffey left us more than two decades ago now and that there is a whole generation of Bluegrass fans and artists who never saw John perform. If this tribute album causes those young people to turn on YouTube and listen to John, I would say my mission has been successfully completed. On the other hand, for an older generation member like me, it’s sweet to stroll down memory lane with John.”