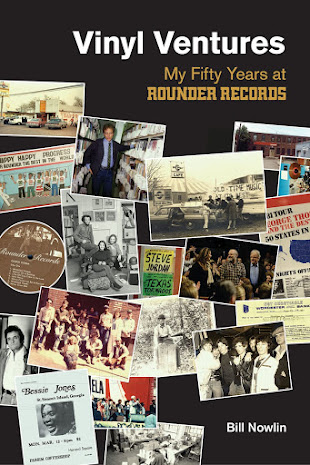 In many ways the story of Rounder Records (Vinyl Ventures: My Fifty Years at Rounder Records by Bill Nowlin (Equinox Publishing, April, 21, 2021, 320 pp, $29.95) and the story of bluegrass music grew together when three college students from Tufts University began heading to Appalachia during the 1960’s to enjoy, record, and collect this music. Now, Bill Nowlin, one of three Rounder Founders has written the entire story of Rounder Records from close up. The book shows some of the quirks and idiosyncrasies of a writer broadly interested in the world of music and a world beyond, without ever losing its focus on the birth, development, and integrity of its subject, a record label of distinction and longevity.

Rounder Records, founded by Bill Nowlin, Ken Irwin, and Marian Leighton Levy in 1970 was unusual for independent labels in having three founders with different tastes, who sought out music to record from a wider palette than many early independent labels. Rounder emerged just as a yearning to discover the roots of the then popular folk revival was cresting. The three Rounder Founders set out to find, record, and collect the music of those roots, at first in the American South, but soon expanding to a much wider, more comprehensive world. 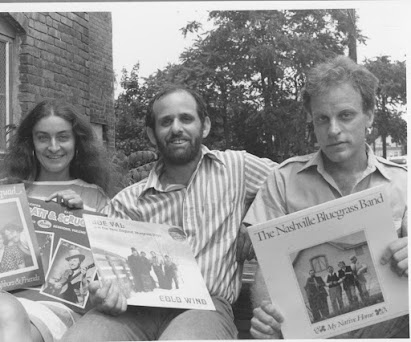 Reading about the early adventures of the Rounder Founders is a little bit like watching puppies playing in their infant box when one considers the size Rounder grew to, and the speed with which it achieved a level of maturity. They hitch hiked to North Carolina and Virginia, haunted record stores in Greenwich Village in Lower Manhattan, attended live shows at small venues, earned free tickets by promoting those shows, built a cut-and-paste recording business at little or no cost, all as an adventure without thought to making it a career. As many of the other new labels left folk music for rock and roll, the field opened to allow three dedicated young Boston students who hung with what they loved, to begin to prosper. It’s the story of three “counter culture” kids doing what they loved with passion and conviction while discovering a lifelong enterprise that worked out for all of them.

In the early 1970’s, the recording industry was still pretty informal, especially among the multitude of independent, one person operations. Rounder benefitted from having three partners who worked hard while trying to be fair to artists and buyers simultaneously. Over time, and with added success, they remained true to their original ideals while, of necessity, having to become better organized and more businesslike. Nevertheless, for those who know them, the Rounder Founders still give off a whiff of counter culture kids from the late sixties and early seventies. There’s an informal construction to the book, as early friends pop in with memories along the way. Reading the book often feels like a conversation with many people from many eras.

Originally collecting, recording performances, and producing these often rather highly specialized recordings focused on previously obscure performers in Appalachia, expanding to early bluegrass festivals and musical gatherings. Over time, their interests took them to cajun and zydeco in Louisiana, reggae and ska in Jamaica, and to Africa for both traditional and contemporary music. All of this became a part of what turned into an international catalog of over 3000 recordings. Meanwhile, the Founders always took care to represent the interests of the performers in terms of both publication and payment. In order to accomplish these sometimes contradictory goals, they took extra care in choosing partners to collaborate with.

In order to manage this huge collection, Rounder’s business model had to expand as they kept tight control over their expenses. Rounder grew into both a recording company and a distributor, eventually leading them to partner with many other small companies to become a major distributor of niche roots music labels. The Founders learned to be nimble and innovative, while always looking out for the welfare and artistic/economic welfare of the artists they signed. During these periods of expansion, challenges, and opportunities, Nowlin’s narrative describes in detail the corporate interactions and complexities, often with the help of long lists.

Ken Irwin expressed the criteria the company used for selecting music to record, saying, “There are three things we look at when we’re signing artists. One, do we like the music and do we feel that it will hold up over time? Two, do we like the people and their representation? Three, do we think we can make money from it?” Furthermore, if the music doesn’t pass the first test, the next two questions were never even asked. (p.204) As the music recording and distribution environment changed after the introduction of the CD, to digital online distribution through iTunes, Spotify, satellite radio, the role of music publishers and labels became increasingly less prominent. Rounder’s practice of being both a promoter of historic, regional, or local performers became viewed as important but less commercially viable. As such, their business changed as they focused on identifying excellence, publishing materials only available through national archives or private collections.

I read Vinyl Ventures in a print edition with Spotify and YouTube at hand, so I could sample the albums and/or performers Bill Nowlin writes about in his clear, informal, narrative style. The e-version has built in links taking readers directly to Spotify versions of the music. Digital Sources often provided me with a setting for the places where the music was made in addition to providing invaluable insights into the range of music Rounder recorded. I was able to find and hear every artist I looked for on one or the other outlet, but I can’t verify the availability of every one. Nevertheless, since it’s inevitable that many musicians referred to in the book are unfamiliar to many readers, using such sources increases the pure pleasure of this book.

Bill Nowlin is the author or editor of nearly 100 books ranging from this history, through other books about music, more than twenty titles concerning the Boston Red Sox, other baseball titles, political history, fiction, and more. He is a graduate of Tufts University and the University of Chicago, as well as being one of the original three Rounder Founders. He taught Political Science at UMass Lowell from 1970 - 1982. A member of the Society for American Baseball Research, he claims to have traveled to more than 130 countries, but says there’s no place like Fenway Park. 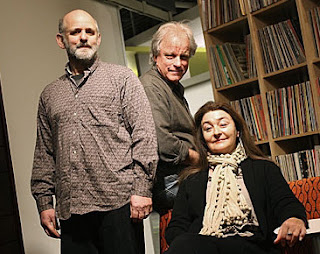 One of the many delights of Vinyl Ventures lies in Bill Nowlin’s seemingly idiosyncratic asides into his travels, love of baseball, and other interests. One particularly useful segment describes the decline and fall of both the recording and book publishing industries to the allures and dangers of digital publishing found on pages 249 - 254. These five pages alone, devoted to the world’s digital environment changing before our eyes would make the whole book worthwhile, even if so many other delightful insights, observations, and useful elisions didn’t exist.

For a person whose experience with Rounder Records grew from encountering bluegrass music relatively late in life with limited familiarity with popular folk and country music, encountering a book like Vinyl Ventures is simultaneously a daunting experience and a mind-opening revelation. The range of enthusiasms, deep scholarly exploration, and sometimes daunting physical challenges, even exposures to danger in order to collect and catalog a significant portion of the world’s music, is difficult, at best, to describe. Bill Nowlin with an expansive writing style sometimes losing track of chronology captures the courage, imagination, and capacity for risk taking, both personal and financial, the Rounder Founders exhibited in building their company.

A problem with books like this one is the possibility of becoming mostly a list of artists recorded, trips taken, awards won, problems overcome, and changes made. All those elements lie within this highly readable account, yet it includes the human experiences of the Rounder Founders as they built a recording empire based on their enthusiasms while including the broad range of interests they pursued. Their recorded music and choice of artists reflected and taught the world the broad range of music and cultural experience available, exposing the musical roots of who we are as people and who we can become. Therein lies the thrill and the charm of Vinyl Ventures.