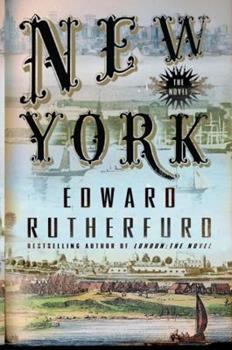 New York, The Novel by Edward Rutherfurd is a sprawling historical novel, much in the Michener style, following the lives, fortunes, and a good deal of drama focusing on five fictional families, serving as possible examples of the fortunes, trials, troubles, and triumphs as one of the greatest cities in the world develops from a small island village at the end of a great river through the economic, social, and cultural changes brought by each new group of immigrants coming to the New World and deciding to stay in New York. This seductive, interesting, and  massive (862 pages) novel offers a fictionalized picture of the growth and development of a great metropolis through the eyes of, primarily, five families who helped populate it through the next three hundred years.

The narrative follows families of Dutch and English early settlers who turned the quiet, agricultural society of the early New York into a bustling city of trade and commerce as English settlers came, and later were joined by other people who had come to Boston, Philadelphia, and the deep South, each bringing changes in attitude as the English lost control of this sprawling piece of ground during the first two hundred or so years. Later immigrants, coming from Ireland, Italy, and Jewish settlements throughout Europe each struggled to survive and ultimately to grow rich and powerful in a city where the real nobility has always been money more than social class. Through the years, each group, represented in the novel by a particular family’s integrates itself into this large, complex city, thrives and rises or falls on its ability to find their own way to success.

Each major chapter of New York represents a time period in the city’s busy history and is headed by a date. Focusing on the development of New Amsterdam, the British dominance, the Revolutionary War, expansion westward and the canals followed by railroads, and the influence of mass immigration beginning in the late nineteenth century, bringing new flavors and cultural experiences to enrich this ever-growing city.

As the child of two separate Jewish immigration waves, first in the mid-nineteenth century and later in the early twentieth century married to the daughter of family composed of a marriage between the descendants of early-post Mayflower father and a mother whose parents were both born in Italy, much in this fascinating book was of interest to me. The fact that much of my early life was centered around the upper west side of Manhatten, where my family and my Dad’s family lived, this book was a natural for me. However, anyone interested in a good origin story, or a rather simplified view of a piece of American history providing insight to most Americans, it proved itself to be attractive across many of my interests and understandings. I thoroughly enjoyed this romp through history which manages to stay grounded in the city’s development while wrapping it in believable prototype characters who add character and humanity to the vast sweep of this novel. 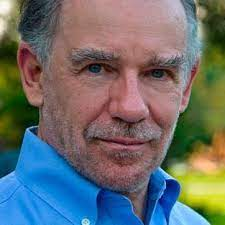 Edward Rutherfurd, born in 1948, is a pen name for Francis Edward Wintle who has written nine historical novels using the same strategy of using fictional characters to represent prototypes existing during particular time periods.Rutherford is English, but attended graduate school in the U.S. and has  He has received numerous awards for his writing in the U.S., England, and other countries.

I read the book in hardcover, which I bought as a remaindered book, but it’s also available as a Kindle book, and in several paperback editions.