For some reason I’ve waited until now to write anything about Archer Mayor’s Joe Gunther series of police procedurals centered in Vermont. In the past few weeks I’ve read Bellows Falls (Joe Gunther Mysteries), The Disposable Man

. Two of these I read in the order in 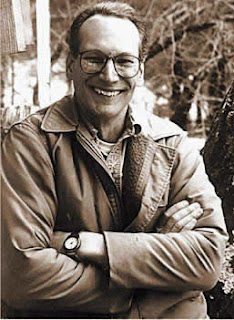 which they were published, while Gatekeeper is situated a little later in the series. When I read from a series of detective novels, I like to read them in chronological order, although doing so isn’t necessary to develop an appreciation of the writing, the characters, the plots, or Mayor’s wonderful sense of place. Despite the fact that his stories take place mostly in Vermont, Mayer is not a regional writer any more than Robert C. Parker whose Spencer lives and works mostly in Boston or than George Pelicanos whose characters live and operate in the vicinity of Washington, D.C. Mayor is merely a first rate writer who writes very good police procedurals.

Joe Gunther is head of the detective squad in Brattleboro, Vermont a small city in southern Vermont along the Connecticut River and on the route of Interstate 91 running north through the state. A town peopled with a variety of characters escaping from both the cities to the south and the rural farms to the north, Brattleboro is home to avaricious business men, ambitious politicians, angry feminists, drug dealers, money launderers, and plenty of others suitable to populate a series of crime novels. Along with the perpetrators come a variety of folks who surround Joe’s daily life, complicating and enriching it. His long-time lover Gail Zigman, Willy Kunkle, a man wounded in both body and soul and a great cop, Sammie Martens, a young and ambitious police woman, and other continuing characters enrich the novels as they develop from book to book.
Gunther is a thoroughly decent man who, though not brilliant, brings a dogged intelligence to his job. He keeps on working until the evil doers are cornered and require Joe’s precipitate action. Often he acts when he should seek support and ends up in life threatening situations filled with tension and danger. Mayer’s skill lies in setting Joe into a situation requiring him to chall 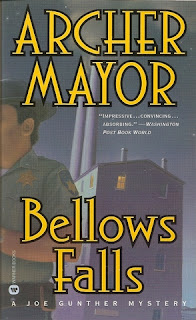 enge himself morally, intellectually, and physically beyond what he thinks his capabilities are. Gunther always shows a deep respect for his colleagues as well as many of the less fortunate people he encounters whose lives have not been easy and who have found themselves in trouble. Criminals in Gunther’s world tend to come from the extremes of society, while the good and decent folk are often hard working middle class people.
Another underlying theme in Mayor’s work is the effect of politics on the ability of the police to do their jobs. Politically ambitious prosecutors and office holders from the local board of selectmen to the governor’s office often interfere in the administration of justice in order to attain their own political objectives. Sometimes people dedicated to a cause, such as women’s rights, become such active advocates for the needs of their group, that their attitudes or behavior make Joe’s job more difficult. Another force hindering Gunther from doing his job effectively is the press, who’s over aggressive reporting raises resistance to his always pure motives. The obstacles to Gunther’s doing his job effectively accurately mirror the countervailing forces in society that balance the police function and force the police to operate within the constraints of a complex society.
For many years I have lived in states bordering Vermont and one of our sons lives near enough to Brattleboro that locations in these books are near his home. For me, Vermont has provided a bucolic face, each turn in the road offering a postcard pretty vista of cows in a field backed by the gentle, tree covered Green Mountains. In any season, Vermont has seemed to me to be a lovely and friendly place. Mayor has made it a more menacing, dangerous, and interesting locale altogether. For instance, in The Dark Root, an Asian gang is terrorizing the owners of Chinese restaurants while laundering money and immigrants through the frightened owners. I’ve never looked at a small town Chinese eatery in the same way since I read this taught thriller. Similarly, in The Disposable Man, a trendy, rural bed and breakfast becomes the sinister center of international intrigue.
While Mayor’s works are centered in Vermont, his work should not be seen as of merely local or regional interest. I’ve long enjoyed reading the detective fiction of Tony Hillerman, whose books take place on the Navajo reservation near th 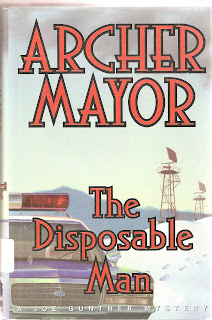 e four corners region, and Michael McGarrity who writes about a police detective in New Mexico. In each case, the author uses local knowledge and a keen understanding of local culture and mores to build interesting and gripping novels. A reader can follow these stories on a road map, but the human map they follow is more universal than the landscape described. Mayor’s novels belong in such company.
The other day I was in a Border’s bookstore in Pennsylvania and found three Mayor novels on the shelves there, but his books are not widely sold outside New England. He says in his web site that he is a “bookstore kind of person” and recommends purchasing books at independent bookstores who are members of a network called book sense. This having been said, his books are readily available through Amazon.com in hard back and paper. I prefer reading them in chronological order, because I like watching the characters develop as their experience changes their perspective on life. Most interesting in this respect is Gunther’s relationship with his lady friend, Gail. It is not, however, necessary to read these delightful books in order to enjoy them. Give Archer Mayor and his character Joe Gunther a try.
Posted by Ted Lehmann at 4:31 PM