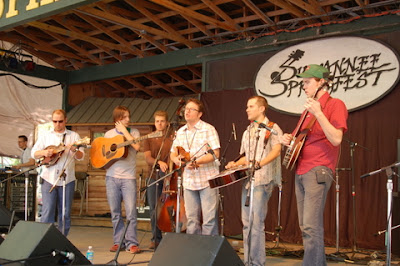 The Infamous Stringdusters, for me, have taken a little getting used to, but as I listen to them and begin to get what they’re doing, they grow and grow on me. This talented group of young musicians has hit the bluegrass festival circuit hard, but their music transcends bluegrass while fitting very comfortably into the genre. Having seen them twice now, at the Spirit of Suwannee Bluegrass Festival in Live Oak Florida in March and at the bluegrass festival at Strawberry Park in Preston, CT and listened to their CD, I’ve decided to try a first for this blog and write a review of their CD while trying to look at the band from a larger perspective. Please let me know y 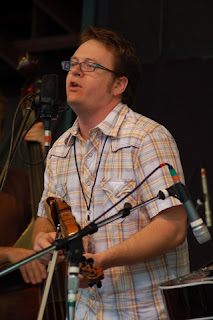 our reaction to this new effort by leaving a comment at the end of this piece or hitting the e-mail icon and sending me an e-mail reaction.

The Stringdusters are composed of six musicians who, while young, bring a world of experience to their work. Each performer has located in Nashville and they came together from work with other bands and as session musicians. They bring broad experience from a variety of kinds of music within and without bluegrass. Jeremy Garrett, fiddler and in performance the band’s spokesman, has performed with Bobby Osborne, Chris Jones, and Audie Blaylock as well as with country artist Lee Ann Womack, he plays a lively, expressive fiddle as well as contributing as lead singer.

The Stringdusters debut album is called Fork in the Road, aptly named as many of the songs emphasize choices made, both good and bad, and the results of these choices. The strength of the songs work to emphasize the value of whole works rather than individual songs as the structure of this work is thoughtful and thought provoking. The songs touch some of the traditional themes of bluegrass while imbuing them with a sound unique to this band. A traditional murder ballad, a prison song, a longing love song, and a road song each place the story teller in a context expressed both musically and lyrically. The instrumental works feature each instrument and ensemble work in a seamless pattern of complex interaction and massed sound that is wonderful to listen to.

is Pandolfi has the distinction of being the first person to major in banjo at the prestigious Berklee School of Music in Boston as well as studying under Tony Trischka. His intricate figures and rolls as well as the careful modulation of his instrument is much more distinct and clear in this recording than it has been in live performance. This has shown me, once again, the importance of sound mixing in the studio and sound engineering in live performances. Pandolfi is an unassuming performer, but the power of his vision and his skill come through clearly in this recording.

The lead-off song of the disk No More to Leave You Behind opens with a plaintive Dobro solo from Andy Hall. The singer comes in saying:

Riding at night through the wind and rain,

Trying to find my way home,

This weary Traveler’s been gone too long,

I return, never more to roam.

This is a road song that could be a cliché if it weren’t for the haunting tone conveyed by the music as the “weary traveler” tries to find his way home to his loved one. The wailing tone – the light in the cabin door, the lonely road, the girl waiting are all themes found in many bluegrass songs, but the tone stands the cliché on its ear, establishing a distinct and delightful Stringdusters sound. A good test of a band lies in its ability to strike a chord and have its audience know immediately what band is coming. This song sets an establishing standard maintained through most of the disk.

The CD/s title song, Fork in the Road, as its name suggests, establishes the theme of choices.

There’s a fork in the road, cain’t seem to make up my mind,

Don’t know which way to go, and I’m still running out of time,

I’m all alone with my suitcase in my hand,

Cain’t find my ticket to the Promised Land,

There’s a fork in the road, cain’t seem to make up my mind.

The singer senses the chill air, finds himself sitting on the fence, and the land of milk and honey isn’t anywhere he can find it. The singer senses the choices coming up symbolized by the fork, but doesn’t know where each leads and is reluctant to make the choice. Jesse Cobb’s mandolin both in his quick and sure solos and his solid chop sets the tone and tempo on this one. Cobb, who’s been around Nashville a while has mostly been a country musician, having worked with Mike Snider, a Grand Ol’ Opry member whose novelty songs are funny and innovative, as well as Melanie Cannon, the Fox Family, and Jim Lauderdale. The transitions from instrument to instrument, including Jeremy Garrett’s sure lead voice is always smooth and sure.

In 3 x 5 the Stringdusters take on bigger stuff. The singer begins by saying, “I’m writing you to…” suggesting separation from his loved one and his desire to share, but as the song develops the 3 x 5 he’s speaking of emerges as the frame of a camera through which he has viewed the world and shared his understanding of it.

Didn’t have a camera by my side this time

Hoping I would see the world through both my eyes,

Maybe I will tell you all about it

When I’m in the mood to lose my way

But let me say you should have seen that sunrise

With your own eyes.

The lyric captures the need to engage the world rather than erecting a wall between self and experience, or between two people. If we’re together, we can really share by not having the camera, or anything, between us. Thus 3 x 5 becomes a metaphor for what separates people from each other. The music, gentle and reflective, mirrors the lyric, without ever taking attention away from the song’s message. Rather, it intensifies it and amplifies it. The singer concludes that “Today I finally overcame trying to put the world inside a picture frame.”

running straight through Nashville. The highlight here is Chris Eldridge’s stunning guitar break. Eldridge in performance seems to drift inside himself, his face registering his pleasure or self recriminations as his fingers fly along the fret board. Chris comes from a family distinguished for its contributions to innovation in bluegrass. His father, Ben Eldridge, is one of the founding members of The Seldom Scene and continues to play his remarkable banjo with them after more than thirty years. His own experience is deep, too. He has toured with The Seldom Scene, studied under Tony Rice, and appears on Chris Thile’s How to Grow a Band disk. At Springfest in Life Oak, FL this past March he sat in with several bands, always making his presence felt.

In another instrumental, Moon Man, Chris Pandolfi’s genius emerges as here he is mixed in a way that seldom, if ever, happens in live performance. Travis Book, on bass, provides a lively solo as well as his customary strong beat. At one point he uses his bass as a drum. Jeremy Garrett’s fiddle soars, growls, and howls in this one – melodic and somehow threatening at once. There is, however, such strong ensemble work that the individual virtuosity is always subordinated to band excellence, yielding a unified and consistent total sound.

Poor Boy's Delight has been the most requested song on this album. The singer asks:

Would you dance with me Molly?

Do you think it be wrong,

If you let down your hair,

Let them play us a song?

Come dance with me Molly,

You got nothing to lose,

But to dance off the soles,

Of your old dancin’ shoes.

his song communicates all the longing, yearning, chaste desire, and soulfulness of a young man in love with what he fears is unattainable. We never learn whether Molly deigns to dance with him or he goes of unfulfilled, but it doesn’t matter. The instrumentals once again never strike a wrong note in supporting and extending the power of the lyric. Andy Hall's precise and inventive dobro is always tasteful and provides a depth of sound that strikes just the right note. This song captures for each of us a dark, quiet night in our youth where hope and wonder cross paths with beauty.

Much bluegrass music treats unhappy subjects with music sending the opposite message by insisting on staying upbeat and happy. While the Stringdusters don’t give up the speed of traditional bluegrass or its themes, their sound is often darker, more menacing, and sadder, perhaps reflecting the uncertainties of today’s life in a fuller and more true fashion than the prison, murder, and lost love songs of an earlier day did. Their music communicates a palpable
sense of loss and tragedy while always leaving room for hope and the future. It’s tempting to want to write about each of the cuts on this remarkable debut album. This is one to purchase in its complete form as the whole complements each of the parts and comes out offering more than any single offering. The Infamous Stringdusters have set a high standard for themselves to maintain, but it appears that the talent and will are there.

The Infamous Stringdusters record for Sugar Hill and you can order their CD here. You can sample three of their songs here or here.