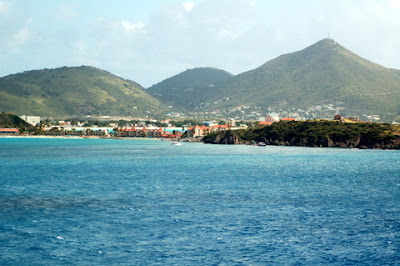 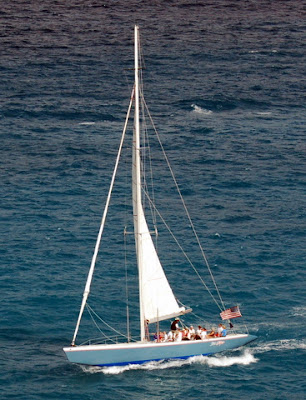 As we’re finishing breakfast in the Rembrandt dining room we looked out the window to see jagged mountains rising above white sand beaches interspersed with rocky shore where the mountains rise directly out of the sea. We’ve arrived at St. Maarten, the Dutch end of two island nations, one of Dutch origin, the other French. The islands of the Caribbean curve south from the Bahamas to a series of small islands just off the coast of Venezuela. For want of a certain explanation, I suspect some of these islands were created by volcanic action while others grew on a base of coral over the ages. Thus a variety of shapes and sizes of islands is found. Sail and motor boats flit back and forth. Three large sailboats are tacking back and forth out of the harbor, each loaded with passengers. It doesn’t take us long to figure out these are excursions from the other cruise boat we see standing at the pier. 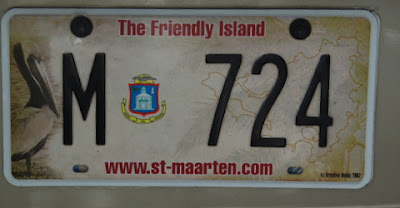 As we approach the pier Irene notices there are no tug boats about. The wind is blowing hard, but the Captain turns the ship around and carefully backs this 1111 foot long behemoth into its space along the pier. There isn’t even the slightest bump as we come to rest, the two huge screws rotated to pull the ship alongside. Across the pier, Disney Magic is moored. By nine o’clock, the gangway fills as a large portion of the passengers head toward the busses that will take them to Waikiki Beach for a day of fun in the sun and music. We have decided not to go on the excursion because of the price and the amount of sun I’d be exposed to. Later, we will discover that perhaps we made a mistake, but we have decided to take it easy, and I want to get Monday’s experience posted. 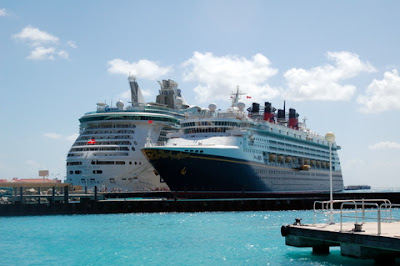 We eat lunch in the Windjammer and Jade Café where, despite how few people remain on board the ship provides a sumptuous lunch with a range of offerings from hamburgers, hot dogs, and pizza to Asian specialties, salads and stews. As always there’s a selection of pastries in small enough portions to allow those who wish to have three or four desserts. After lunch we disembark to visit St. Maarten’s capitol city, Phillipsburg. St. Maarten/St. Martin is the smallest land mass in the world shared by two sovereign nations at 37 total square miles. It is 9.3 square miles long and 8 miles wide at its widest point. The highest point is 1392 feet. The mountain sides are studded with homes, some quite stunning from a distance and certainly more so close up. Closer to town and the beaches resort hotels and condominiums can be seen. While French, Dutch, and English predominate, over 100 different languages are spoken on the island. 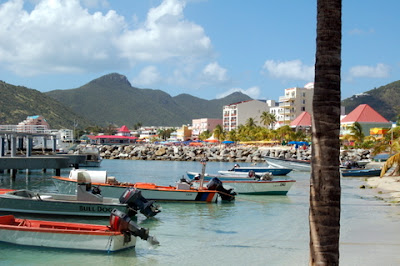 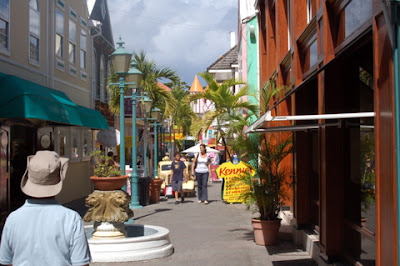 We walk down the long pier to the water taxis which transport us ($6.00 all day fare) to downtown Phillipsburg. Since tourism is the basis of the entire economy of the island, there is little wonder that the down is dominated by small shops. The Welcome Center, located at the head of the pier, distributes free of charge a glossy and thick magazine detailing the stores and brands available. Generally speaking the emphasis of the small shops along Phillipsburg’s narrow streets is on jewelry, loose precious stones, cameras, and liquor. There is a small market in the middle of town selling colorful clothing in island prints. A few blocks away from the crowded beach the shops are more focused on meeting the needs of local people. There’s a market, clothing stores, Penny’s Department Store (not to be confused with J.C.), and smaller shops. The streets are very narrow and there’s a bustling atmosphere. A number of branch offices of international banks are available as well as a couple of large law offices, suggesting the possibility of offshore business opportunities providing tax advantages to American businesses and individuals not wishing to have American tax officials getting too close a look at their books. At mid-day the sun is brutal and we try to stay in the shade of buildings. Since we’re not in the market for anything, we window shop but don’t enter many of the stores. I go into a camera shop to buy a little gizmo and price the camera and lens I’ve been lusting after. I find that if I bought it here, I’d save about $400 under the price at home. The new lens a camera body will have to wait for another day. We head back to the ship for a nap and some quiet time. 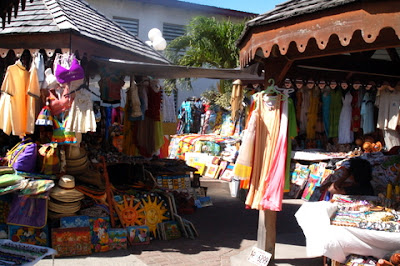 Irene wakes me at around 4:30 to go on deck to watch the passengers return. From four stories above we see lots of sunburn, some people staggering from the free rum punches provided at the beach, and lots of happy, tired people. We watch from the deck as the last few stragglers stroll up while the gangplanks are being taken in. One might think they’d be in a hurry since the ship waits for no one, but stroll they do. We head for dinner and are joined by Josh Goforth and Todd Meade from Lorraine Jordan’s band. These two young and talented musicians are delightful dinner companions, and we’re glad to have them at table. Our wait staff, Ronel from South Africa and Selvino from India, is good humored, efficient, and friendly all at once. The dining room is perhaps half full of people tired from their day ashore. Lorraine has bought tropical print shirts for her band members while many other passengers have bought them, too. This makes for a most colorful view as we look out. Susanna Jordan Langdon and Molly Kate Cherryholmes sport trick glasses and are relaxed and coltish as they mug toward other guests. 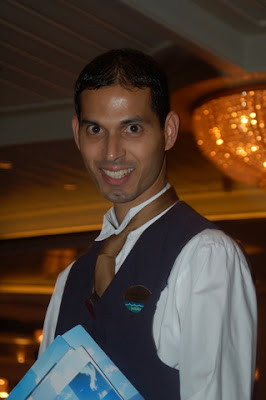 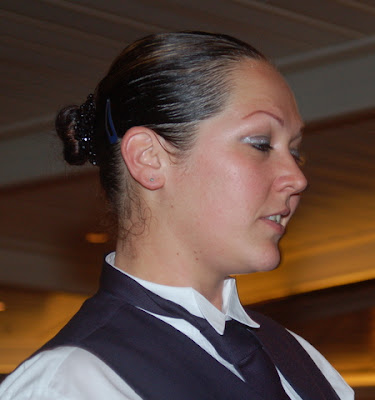 Who's This?
Officers and Spouses - Lorraine Jordan Fan Club 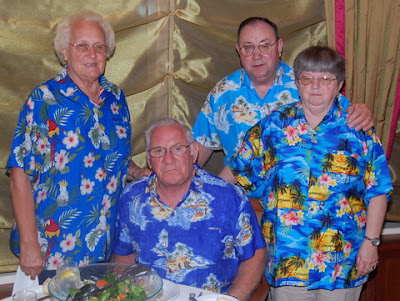 After dinner we head down to the Conference Rooms on deck 2 with our instrument for an evening jam. One jam is filled with band members and (mostly) skilled passengers, so a pretty big group has joined them to watch. There are two other jams going on, one pretty skilled and a relatively slow jam for the less experienced. We join that one, picking and singing for a couple of wonderful hours. We feel welcome despite our relative inexperience and are encouraged to lead songs and take breaks along with the stronger musicians. It’s the kind of experience that helps novice musicians improve their skill levels. Keeping up with faster, better pickers and trying to take instrumental breaks in public encourages improvement. The more we participate in this sort of jam, the better we’ll get. Since, in many ways, jamming is what bluegrass is all about, it's really fun to be involved in this on the cruise. Things begin to wind down, and we hit our stateroom around 11:00 o’clock. Tomorrow we’ll be at sea and there’s another formal dinner. We fall quickly asleep to the gentle rocking of the ship.
Jammers 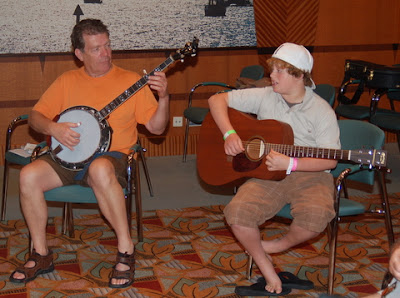 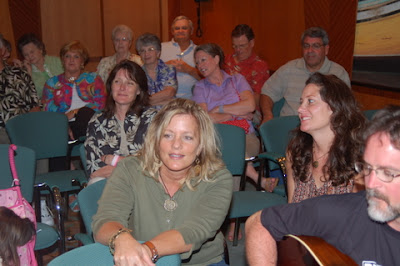 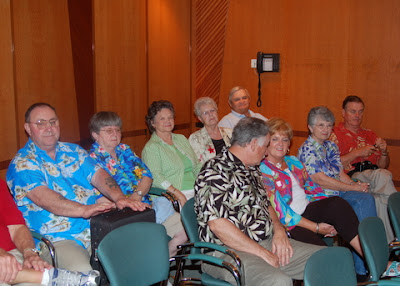 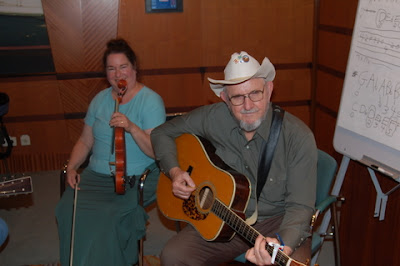 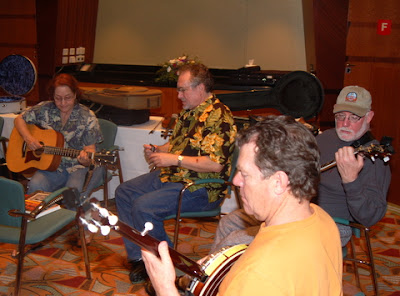