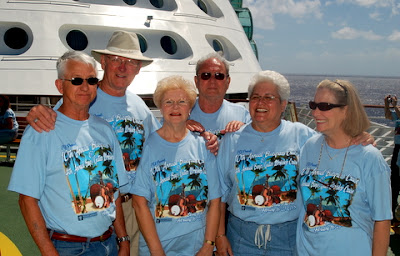 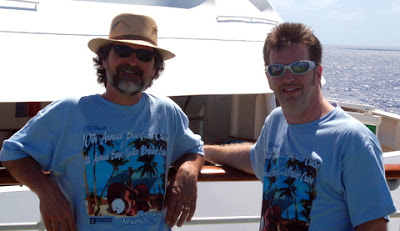 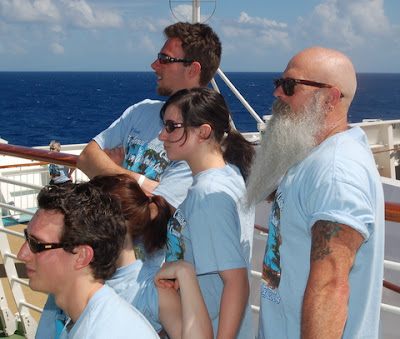 A day at sea provides time to get rested up, a bit. The entire ETA group assembled on the heli-pad on the front-most deck of Liberty of the Seas for a group picture. Passengers and musicians clustered together while one of the ship’s photographers perched on a small platform and held fast by a rope shot some pictures. After the picture we rushed to our cabins for me to change into a swim suit for the first time on this trip. 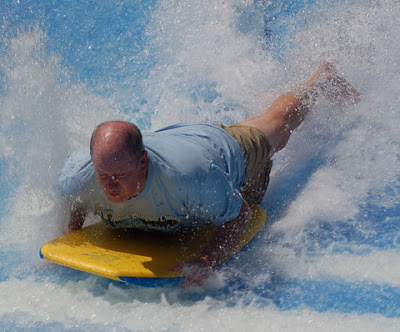 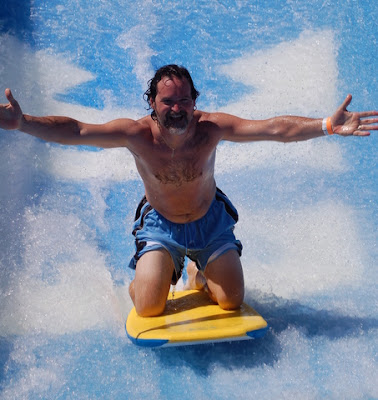 Your faithful blogger had decided to challenge the dreaded Flow Rider, mastered by children and adults of all ages. After signing a release form assuring the cruise line would not be responsible for anything happening to me for the remainder of the trip. I think if I had a heart attack and died in bed any time in the next six months, Royal Caribbean would be completely absolved of any possible connection to this relatively harmless, but exciting, water activity. The fact that the person in line ahead of me was a tiny girl just reaching the 48” minimum height and weighing no more than fifty pounds provided no solace. Irene took a convenient seat for photo purposes as I joined the line. Forty minutes later I stood on the rubbery blue surface while tons of water cascaded past my ankles at 35 miles per hour as the life guard-coach gave me final instructions. I placed the butt end of the boogie board against my upper thighs and leaped (well…stumbled) into the void. I slid quickly down to the lower end of the Rider, adjusted my weight forward, and slowly moved up towards the break at the top. More forward pressure brought me sliding toward the bottom, letting it up allowed me to slide upwards. I was riding the Flow Rider! Getting the board marginally under control, I worked it from side to side, once sliding out of the heave water onto the right side where almost no water flows. I pushed myself back into the stream, achieved a bit of equilibrium and rode for a few seconds. My next challenge was to try to do something. The choices include getting up to your knees, doing a headstand on the board, achieving a forward somersault board in hand, pushing the board away from you and hope it catches you before you’re ridden off the top, or doing a barrel roll. I lined myself up, tired to roll over while clutching the board to my chest, lost control, and quickly slid off the top. My ride was over, but it had been great fun. I sat down with Irene, took a quick look at a few of the pictures and waited for Jerry Butler and Skip Cherryholmes to complete their much more aesthetic rides. Jerry managed not only to get to his knees, but to release the board with his hands and flex his muscles before going over when he, too, tried a barrel roll. Skip had a successful, but shorter, ride because he tried the barrel roll pretty quickly. Irene and I headed to the cabin to change for lunch and, later, a much needed nap.

Later in the afternoon we headed to the conference center to see if there was any jamming going on. In one of the rooms we found the Mark Newton band, augmented with guest m 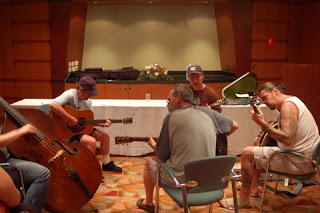 andolinist Alan Bibey, practicing for Thursday’s performance. The practice session, which we watched for perhaps 45 minutes, proved to be quite interesting. Under Mark’s direction, but with lots of give and take, the band members worked through the songs in their set, deciding

who would sing which parts in the trios, the tempos and keys they wanted for each song, how the pattern of solos would work, and other details. They’d break off a tune in the middle to chat with bass player Beth Lawrence playing a crucial role. Alan, who do

esn’t play with this band, is a very quick study and worked out solos as well as back-up licks that fit in perfectly. The band would begin where it had left off and work through the song until Mark was satisfied they were ready. The seeming ease with which each person fit into the familiar bluegrass patterns and blended together into a working ensemble speaks to the high quality of their musicianship as well as providing an example of one of the wonders of watching a playing bluegrass. Bluegrass musicians, particularly in a jam situation, can use the conventions of the music and their familiarity with its patterns to create a sound giving the appearance of years of playing together. As they ended we went off to find the ice rink and get a seat for the ice show. 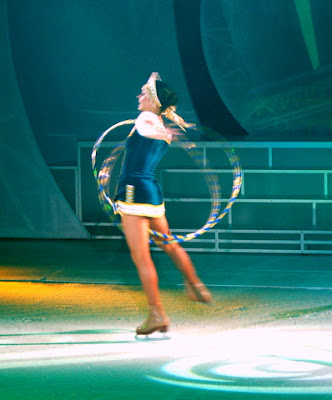 “Ice show?” you might ask. That’s right, there’s a small ice rink located at the bottom of the ship near the center, presumably a place where the ship’s movement is minimized. We sit down just behind Phil Leadbetter and his wife Lisa. The show, a mélange of familiar tunes, many coming from show music but based on classical repertoire (Carmen, Kismet, Viva Las Vegas) used the music as a forum for the skaters to twirl and jump, lift and spin with surprising speed considering the size of the surface. The skaters, many from Russia, gave an excellent account of themselves. The highlight was a young Russian skater doing a solo routine which began with her twirling a single hula hoop and became increasingly complex and amazing as she added hoops. By the end of her routine she was keeping at least a dozen hoops going while she moved and spun. The rousing finale featured the entire cast skating to a rousing rock medley and bringing the crowd to its feet. The show ended with the crowd on its feet as we headed for the exit to change for formal dinner.

Ten minutes later we walked into the dining room to find our seats taken. Lorraine Jordan had seen us at the ice show, noticed we were still in shorts, and assumed there was no way for us to get to dinner. Fooled her! After some readjustments, we had our seats back with Josh Goforth, Todd Meade, and Susannah, Lorraine’s delightful fifteen year old daughter. Ben Greene, Carolina Road’s very able banjo player, joined us, too. Dinner featured lobster tails, a delicacy which often involves a contest to see who can eat the most of them. We abstained, but there was plenty of lobster eaten. Dinner over, we headed for the music portion of the evening. What had started as a leisurely day ended in a rush to get it all in. 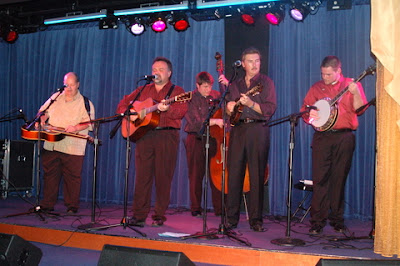 Grasstowne opened the evening with another great set. Jason Davis on banjo seems to have improved his already fine picking over the past few months. Davis is a man of few words who shows almost no emotion as he plays wickedly clean and accurate banjo at speed. Because there is no pretense or showiness in his play, listeners might miss the extremely high 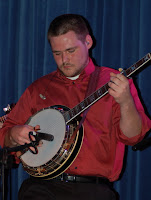 quality he achieves. In fact, Grasstowne as a whole is business-like and straightforward in its play. They banter back and forth some and clearly enjoy making music together, but the excitement they generate lies more in their music than in their show. Alan Bibey plays mandolin with such authority and grace he seems to be making hardly any effort at all as the complex fingerings and marvelous triplets leap from his instrument. It almost seems too easy, but make no mistake, Bibey has paid his dues in sweat and toil to achieve this seeming ease. No one plays the mandolin any better. Similarly, Phil Leadbetter on Dobro seems to be a chatty friendly guy at the left end of the band. His sound soars and dives in and around the melody, helping create what has become the unique Grasstowne sound. Steve Gulley, on the other hand, lets it all hang out as his voice curls around the tunes, showing pain, love, and loss in each note. Together, this band, with Jayme Booher providing the ever solid beat on bass, has forged a sound honoring traditional bluegrass while reflecting contemporary sounds and sensibility. They’re truly a marvelous group. 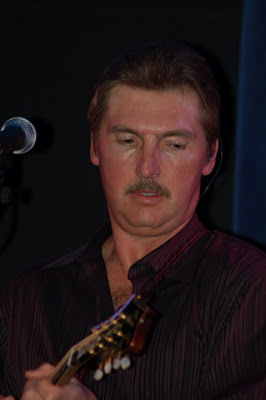 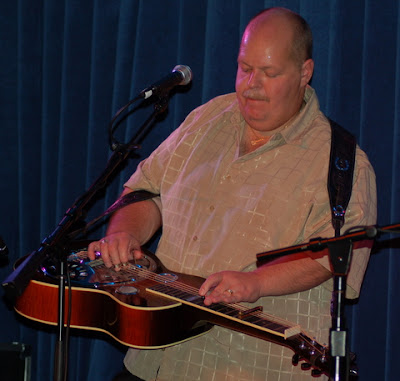 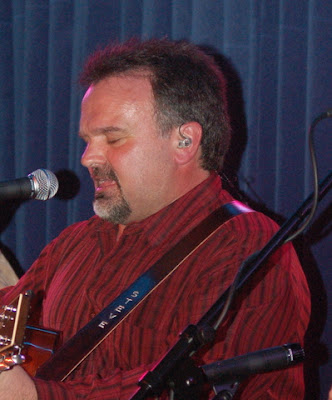 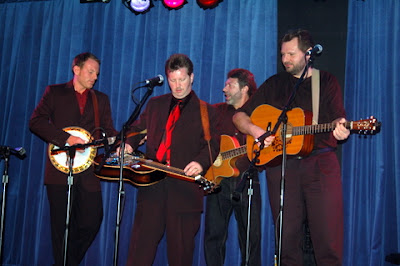 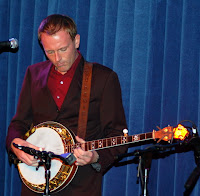 group that has taken the bluegrass world by storm during the past four or five years. Graves, whose Uncle Josh played Dobro with Flatt & Scruggs for many years, plays his uncle’s more traditional style and sings in a very fine high baritone voice. Supported by Daniel Grindstaff on banjo and Joe Benning on guitar, Graves’ presents a very solid show which should please any fan of traditional bluegrass. Bennie Bolling on bass remains in the background, but is quite evident both for his solid beat and his huge smile. Planted squarely behind the rest of the band, he presents an elfin presence filled with the joy of the music. Tim Graves and Cherokee do a fine job. 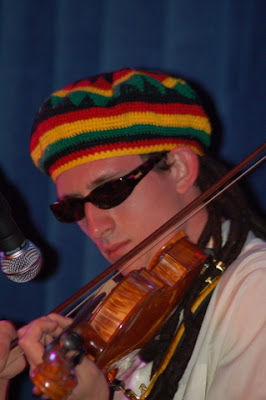 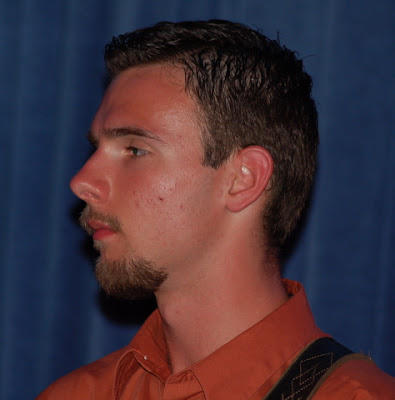 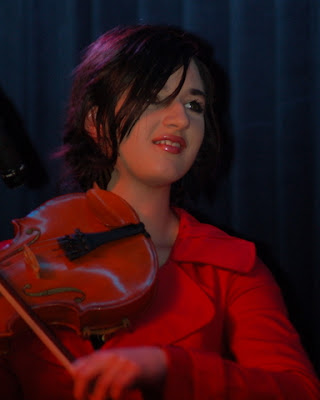 The Cherryholmes Family closed out the evening with a set composed mainly of some new songs being added to their performances and songs requested from their first big CD. BJ Cherryholmes, in the spirit of the islands, wore a Rasta cap with black dreadlocks dangling down. He called himself Billy Bob Marley. Humor, however, can’t mask the intensity of his performances, whether on fiddle, mandolin, or in vocals. His singing has improved greatly in the past year or two, with new timbre appearing in his once reedy voice. Molly Kate, the youngest member of the family, is now nearly sixteen but graduating from home-school with sufficient credits to enter her sophomore year of college. Her play on the fiddle and her much improved stage presence show the intelligence behind them. Skip Cherryholmes is more than a Flow Rider surfer. Both his rhythm guitar and his aggressive flat picking add drive and strength to the band. Cia Cherryholmes, thin and wraithlike with her black hair and piercing red lips, continues her strong vocals and fine harmony. Her harmony work has received great recognition as she sings on many albums fronted by other musicians. Her banjo play remains excellent. Mother Sandy Leigh, who provided much of the early instruction and organization for this band continues to offer her high energy and mature voice, while father Jere emcees and offers what passes for humor with this band. As the interaction between the younger members has increased on-stage, his peculiar brand of humor has become less necessary. One of the real pleasures of this cruise has been the opportunity to interact with the kids in a more informal setting where they can be the enthusiastic young people they are. Their increasing interest in broader approaches to the music will bear careful watching as they continue to grow.
Sandy Leigh and Jere Cherryholmes 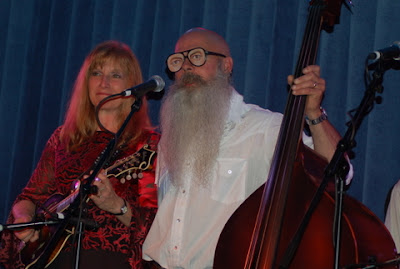 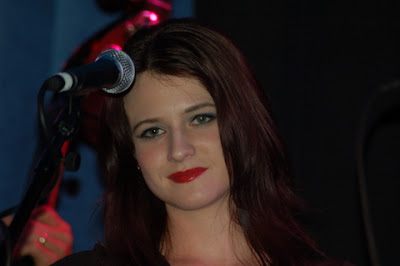 As the evening ended, a number of fans and musicians retired to one of the shipboard bars for some impromptu music making while we headed for bed. Haiti and the private beach at Labadee tomorrow. 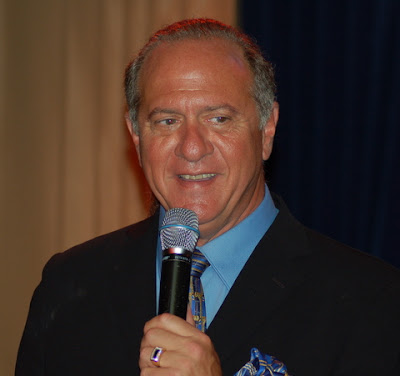