Appetite for Self-Destruction by Steve Knopper 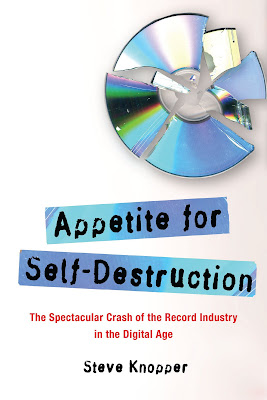 Appetite for Self-Destruction by Steve Knopper (Free Press: New York, 2009. $26.00) is must reading for anyone interested in what’s happened to the recording industry and what to look for in the future. While bluegrass music is not mentioned once in the text, the story provides historical, technical, and planning advice that might very well prove essential as new technology affects the way music is presented, delivered, bought and sold, and collected. Whether you are a producer of music or a consumer, reading this essential book will help you keep yourself informed and prepare you to make decisions in the coming years. While not providing the end of the story, Appetite for Self-Destruction offers guidelines to direct thinking about music past and future.

About the first two thirds of this book deals with music I hardly listened to during the period from the late sixties into the nineties. That is, I was barely aware of disco and the movements within rock and roll as I continued to listen to Frank Sinatra, Ella Fitzgerald, classical symphonic music, and folk music. During the late seventies I was taken with Harry Chapin and later the great Canadian Stan Rogers while Irene brought me to Mary Chapin Carpenter and other country singers. The kids listened to rock, but I didn’t pay much attention. Therefore, the wars going on for dominating the markets in disco and its eventually being put in its place by rock and roll eluded me. The plethora of record companies and the competition between them that Knopper catalogs meant relatively little to me, although I was marginally aware of payola, Alan Fried, and the emergence of Michael Jackson, who really didn’t interest me. Oh…and sometime during the sixties a friend gave my mother a reel-to-reel tape of Flatt & Scruggs, which I listened to, but they weren’t Pete Seeger or Josh White. That all, by way of confession. 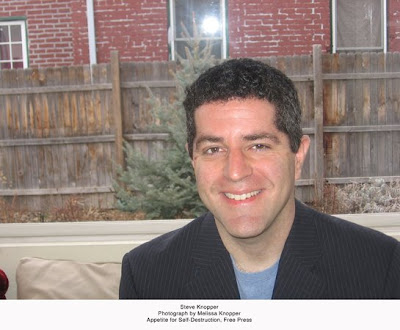 Despite all the names of artists, companies, executives, representatives, and so-on, this is essentially the story of how the recording industry used cash, drugs, and sometimes sex to purchase air play on radio stations around the country, and the world. It’s also the story of how the industry resisted the change from LP records to compact disks and then, realizing the potential for unlimited copying, sought to build copy protection into the disks. Thus progressed the beginning of the still ongoing wars between those who would sell the product and those who would steal it or who would claim, probably disingenuously, to believe in free distribution of the product. At every step along the way, the people who have sold recordings have resisted technological advances: radio, LP records, compact disks, computer file sharing, and on and on, only giving in when they finally, much too late, saw the inevitability of the advance. The coming of the Internet, with its associated opportunities and risks has only served to exacerbate the problems for traditional records companies and change the shape and nature of the music business.

According to Knopper, the upshot has been that the recording industry is near the end, but the music business is alive and healthy, if only people can figure out how to tap into it. He asserts that the Compact Disk as a format is dead. Only the record producers don’t fully understand this…yet. The good news for bluegrass so far is that the consumer of this niche music is deeply conservative and will probably continue to purchase CDs, or even seek out vinyl pressings, long after digital distribution has become the norm for rock and pop music. The shape of the inevitability of the change began to become obvious with the invention of the iPod over at Apple Computers and the development of iTunes as a way to distribute and organize the music a person owns. Record labels quickly saw Jobs’ proposals as a way out and signed contracts with Apple to permit $.99 per song legal downloads and, roughly, $9.99 albums. A formula was derived that provided artists, composers, and recording companies with a split of the revenue, while Apple kept the largest chunk of the money. As of the third quarter of 2008, iPod sales seemed to be approaching 160 million units. My own iTunes contains 4746 songs, which the program tells me would take 10.2 days to listen to straight through and which take up almost half of my thirty gig hard drive. Every song in my iTunes has been copied from a CD which we own and mostly from ones we purchased. A few were given us by bands, record companies, or promotion people. We have not sold or loaned any of them. I still believe in albums, thinking that thoughtful bands and producers have themes and ideas in mind when they select a dozen tunes for a recording, and that finding those ideas is what listening to a CD is about. I don’t care too much for hits, but I do shuffle my songs when I’m listening to the iPod. Often I come across a song I haven’t paid attention to before, and it really catches my attention. So far, I haven’t bought a downloaded song or album, but it surely won’t be too long before it happens.

Knopper describes a future world where the sale of recordings in a permanent format is no longer the center of a performer’s career. He describes what have become known as 360-degree deals in which performers contract with a packager to manage all aspects of a career: recordings, tour, digital downloads, ring tones, t-shirts, bumper stickers, product tie-ins, tabs, lessons, and every other element of a music career that might be possible. He suggests that while the recording industry might be dead or dying, the music business is not. He also admits that we’re only on the cusp of this new age of music making and music distribution, and that there’s no clear direction that it’s possible to bet on and know that success is assured. He’s certain, however, that the hit oriented distribution model that succeeded so wildly in the last generation is gone for good.

Appetite for Self-Destruction can function as a primer to the trials and tribulations of the recording industry and music business. There are many other issues to consider and, for anyone interested in the music business in general or the development of bluegrass music in particular, this book is a good place to start. An area Knopper barely touches is the development of mega-festivals and the development of major festival packagers. You may also have noticed that many top bands are beginning to perform at venues not usually thought of for bluegrass, NASCAR race tracks for instance. This book, nevertheless, sketches out the problem and provides a structure for beginning to think about the future. It’s an invaluable aide. It can be obtained from your local independent bookstore or chain, as well as from Amazon as a book, audio CD, or e-book for your Kindle.