In Colin Woodard's American Nations, the author steps back from our day-to-day politics and using the tools not only of political science but of sociology, anthropology, and psychology to plum the depths of the issues facing us as a country exmaines how we have emerged as not one people, but groups of separate people with different world views and solutions for the problems confronting us. By focusing on larger movements of peoples rather than the words and deeds of individuals, Woodard allows a portrait of national identities within America to emerge. The various peoples who arrived in this hemisphere from Columbus' voyages at the end of the fifteenth century to the various immigration waves since, with particular reference to those before about 1750, populated different parts of the country, including more than what most of us often consider the source of our country, the eastern seaboard. Included are the descendants of the Spanish conquistadors who extended their empire into what Woodard calls el norte (now including much of the Southwest) and New France, mostly what is now parts of eastern Canada and southern Louisiana. where their varying cultures took hold and still dominate. Other American nations include Yankeedom (New England and parts of New York), New Netherlands (originally New York and the Hudson Valley), The Midlands, Appalachia, The Deep South, and so-on.
Map of the American Nations 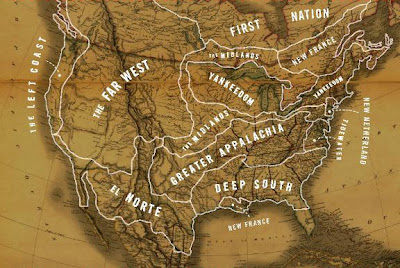 These groups sank deep roots of tradition and behavior, which spread westward like the country only to encounter dissimilar values and cultures which still dominate the varying regions. For instance, the Puritans settled in New England with a vision of building their “shining city on the hill,” as a beacon for God's promise to mankind. Rather than seek religious freedom and tolerance for all, they struggled to establish their own kind of theocracy. As time passed, according to Woodard, the Puritan church lost its dominance, becoming Congregationalist, as immigrant groups entered the region. Nevertheless, the qualities and values they represented remained as they moved west across New York and into the upper Midwest. Qualities of frugality, moderation, simplicity, and a rather rigid moral code predominated in the regions they moved to. Voting patterns in the present time still reflect the values and structures (town meetings, universal suffrage, religious conviction, etc.) they established and are reflected in the voting patterns of these regions.
Similarly, Woodard's region called the Deep South and composed mostly of the sates which sought to form the Confederacy was dominated by a class of aristocrats who based their governing theory on the the hierarchies represented by Greece and Rome. They were large landowners whose fortunes were built on a labor base of African slaves and poor white laboring people. They stood at the top of a human pyramid designed to serve their needs for comfort and riches. This pattern persists today in the regions they inhabit, and is characterized by efforts to keep the underclass subservient, voting restricted, and education ineffective. The two regions have been locked in a life or death struggle since before the Constitution was written. Woodard says, “The goal of the Deep Southern oligarchy has been consistent for over four ventures: to control and maintain a one-party state with a colonial style economy based on large scale agriculture and the extraction of primary resources by a compliant, poorly educated, low-wage work force with as few workplace safety, health care, and environmental regulations as possible.” (302) Garish displays of wealth and position are part of the cultural DNA of this nation.
Upgraded Map (by County) 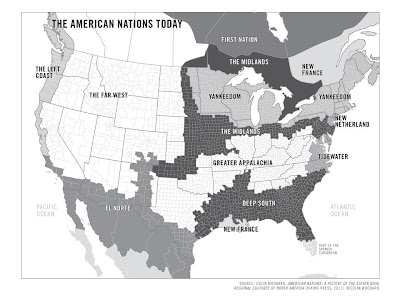 Meanwhile, the balance of power has often been maintained by the cultural regions Woodard has called The Midlands, Greater Appalachia, and the Far West. Each region, representing differing cultural values and social norms has chosen between the two dominant governing strategies based on its needs at a given time in history. Greater Appalachia, populated largely by Scots-Irish immigrants escaping centuries of oppression by British aristocracy has chosen a restless motion towards the west along with a stubborn and often violent expression of its independence. Often sunk in dire poverty, the descendants of the early Appalachian peoples resisted slavery while simultaneously opposing the moralistic hectoring of Yankee puritanism, thus fracturing in E. Tennessee, Kentucky, western North Carolina, and West Virginia parts of what was trumpeted as the united confederacy, with families joining either north or south based on individual needs. The development of the Far West has been structured by its geography, geology, and cultural mix to have a highly independent streak while still being uncomfortably dependent upon federal dollars and thus control.
Colin Woodard

It is a seductive and overly simplistic view of our national development to consider our struggle as one that says “Heritage is Destiny.” The descriptions Woodard provides of the various regions and the communities which created their qualities rings just true enough to draw a reader into his ideas. Yet it seems too much to simplify the complex variety of factors present. Having been born in New Netherlands, educated in The Midlands, lived in the Deep South, and settled in Yankeedom while sojourning in Greater Appalachia in our life in bluegrass music, am I, as an individual, unaffected by all these influences? Or do I bring a synthesis to my world that resembles deeply the ongoing development of American into a broader developing culture? What influences do mass media, mass migration, and constant movement have upon our social and political world?
Woodard supposes some eventual outcomes of our current struggle. He suggests the possibility that el norte could join northern Mexico with southern Arizona, New Mexico, California, and parts of Texas to create a new nation or even independent state. Or perhaps parts of the northern U.S, could join with parts of Canada. Or maybe the legal claims being forwarded by the First Nations (surviving aboriginal peoples) could form a confederation taking advantage of new powers granted by both Canadian and American governments. These possibilities seem pretty far-fetched and deterministic. An important insight Woodard provides is his discussion of the meaning of “freedom” and how the word means different things to different Americans. While there is much ongoing change in the United States (perhaps an oxymoron if Woodard is correct), there will continue to be a struggle over what Freedom means and how it is expressed within our country. It's clear we are not “one nation indivisible” as our mythology has us repeat daily in school, and will not become a homogeneous nation-state as some other countries are. Nevertheless, we continue the discussion, sometimes in much less than civil ways (particularly in our public media) while we cross the borders a great deal, continuing our restless search for acceptable answers which won't ever be the same for all of us. AmericanNations makes a valuable contribution to this discussion.
AmericanNations by Colin Woodard (373 pp.) is published by Viking Press and retails for $30.00. It's heavily annotated with extensive notes, a useful index and suggestions for further reading. I bought my copy. It's available from all the usual sources. Help this site by purchasing it through the Amazon portal here.
Posted by Ted Lehmann at 6:15 AM