Writing on the Wall by Tom Standage - Book Review 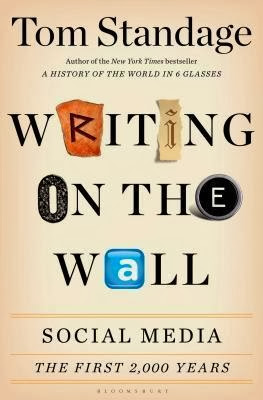 In Writing on the Wall: The First 2,000 Years (Bloomsbury USA, 2013, 288 pages, $26.00), author Tom Standage considers the effects of writing on personal and public communication through the ages, positing that the writing and distribution of news, analysis, and opinion throughout history has always been a promoter of freedom, whereas limiting communications has always been the role of the elites and the rulers. He suggests that each advance in communications technology, in the freedom of information, has served to help create a more informed, aware, and, therefore, free people. He also says that efforts to censor, tax, behead, jail, or otherwise limit information are always doomed to failure. Along the way, he considers the major technological changes which altered society's ability to communicate as well as the officials' strategies used to limit their effect. At each juncture, he compares older (and sometimes now obsolete) means of communication as examples of social media in their time. In doing so, he presents a fascinating and convincing argument for human freedom at the expense of the status quo. Writing on the Wall is an important and interesting book filled with the personalities and events promoting improved communication through the ages. In the title, he considers that the present state of affairs is merely the next step in the process, which will only be fully revealed by time.

Standage begins his story in the dawn of civilization, suggesting that writing emerged on clay tablets and papyrus shortly after humans settled into a more agrarian lifestyle than nomadic hunter-gatherer. As they settled down, humans discovered the need to keep accounts and detail ownership and writing emerged. With the Greeks, knowledge became more frequently written, while Socrates lamented that the youth were losing their ability to memorize and listen. The Romans found it necessary to develop writing still further to help maintain control of their vast empire. Roman elites began communicating widely through news and personal letters, often written by scribes and widely disseminated. Early Bible texts were in the form of letters from the first apostles to local churches around Asia Minor and throughout the Mediterranean Roman holdings. With the fall of Rome, literacy, too, took a dive, only kept alive in the monasteries, where monks copied the holy writings. With Gutenberg's invention of the printing press around 1439, a revolution in literacy was set in motion exemplified by the wide distribution of Martin Luther's 95 theses, which ignited the Protestant Reformation. Throughout this time both the Church and the nobility sought to restrain the spread of knowledge by taxing presses and seeking to maintain illiteracy in common people. In England, Henry VIII imprisoned and executed many people because of their writings. Such brutal repression encouraged writers to say in disguised poetry what they could not say outright. Nevertheless, their was a constant pressure against the forces of privilege and the elite to spread knowledge and understanding through the written word. Coffee houses emerged as centers of discussion and social interaction across class lines. Science and philosophy especially flourished, as people were able to share their thoughts and ideas more widely. Reading the Bible in vernacular translations spread both literacy and faith, as well as encouraging people to interpret scripture themselves.

In America the Puritans came, of course, to practice their own religion, not to establish freedom of religion, and thus discouraged writings that suggested understandings of faith different from their own. The battles against the imposition of the Stamp Act by Parliament and the printing of Patrick Henry's pamphlet “Common Sense,” did much to fan the flame of the Revolution. As printers became increasingly able to disseminate information in bulk, the exchange of knowledge became more widespread. Once established, the Founders were clear that freedom of the press was perhaps their highest priority, because they enshrined it in the first amendment to the U.S. Constitution, right beside religion and speech. Perhaps the greatest mistake in the administration of our second President, John Adams, was his insistence upon passing the alien and sedition acts, which sought to control the press. They were quickly withdrawn, but Adams only served one term as President.

Interestingly, Standage sees the consolidation of media control first in newspaper empires (Hearst, Pulitzer, Greeley), then in radio broadcasting, and finally in network television (NBC, CBS, ABC) as anomalies during which media was further concentrated under the control of a relatively few individuals and corporations. This trend was accompanied by what was seen as a relative “dumbing down” of information based on too little breadth of information sources. The development of the Internet and particularly of social media have broadened the sources of information and increased the amount of diversity of opinion focused on every question. Of course, the new freedom leads to the possibility of new incursions on privacy and greater risk for government interference with privacy. Also, it makes it increasingly difficult for anyone to keep secrets.

Much of Standage's argument helped clarify issues that had befuddled me in the past, particularly the Stamp Act and the Alien and Sedition Acts. But I read a lot of American history with some areas becoming holes despite my familiarity with it. Therefore, the fact that the material on the French Revolution served to confuse rather than clarify my knowledge of that area made me wonder whether a reader less informed about American history would have the same problem of not finding the clarity they desired. Nevertheless, Standage's account of social media in a larger context sheds important light on the communication process and people's desire to be in touch with each other. 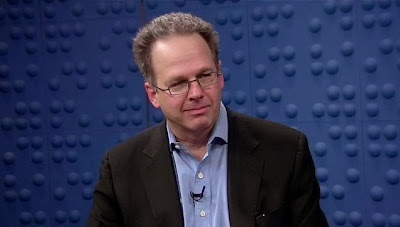 Tom Standage is digital editor at The Economist, overseeing the magazine's website, Economist.com, and its smartphone, tablet and e-reader editions. Before that he was business affairs editor, running the back half of the magazine, and he previously served as business editor, technology editor and science correspondent. Tom is also the author of five history books, including "An Edible History of Humanity" (2009), "A History of the World in Six Glasses" (2005), a New York Times bestseller, and "The Victorian Internet" (1998), described by the Wall Street Journal as a "dot-com cult classic". He writes the video-game column for Intelligent Life, The Economist's lifestyle magazine, is a regular commentator on BBC radio, and has written for other publications including the Guardian, the Daily Telegraph, the New York Times and Wired. He holds a degree in engineering and computer science from Oxford University, and is the least musical member of a musical family. He is married and lives in London with his wife and children.

Writing on the Wall: The First 2,000 Years by Tom Standage (Bloomsbury USA, 2013, 288 pages, $26.00) tells the story of social media through the lens of the spread of communication throughout human history. It has been described as a pre-history of Internet social media.  The book relates a lively and interesting story through eyes looking both backward and forward, rather than concentrating on the technology of now. The book is filled with surprising insights presented with wit and grace. I received the book as an electronic galley from publisher through Edelweiss Beyond the Treeline. I read it on a Kindle.