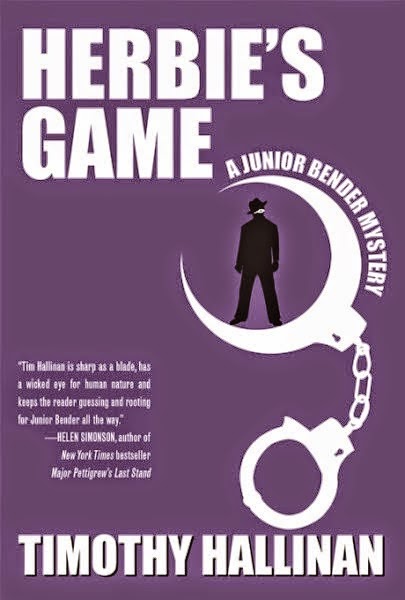 Herbie's Game (Junior Bender #4) by Timothy Hallinan (Soho Crime, July 2014, 400 pages, $25.00/12.99) jumped up and grabbed me in the first two or three pages and kept me with the story and the character all the way through, leaving me hungering for more. I will surely read back in Hallinan's absorbing series, as I eagerly anticipate #5, and have already ordered his newest release in the Poke Rafferty series, with which I'm also unfamiliar. Hallinan has come up with an engaging character based on a unique premise that delivers strong situations, weird and attractive subsidiary characters, and situations usually encountered from the “other” side. How so? Well, Junior Bender is a burglar. His clients all live on the edges of society participating in their own criminal activities with enthusiasm and professional elan.

Herbie's Game opens with Bender in the midst of a burglary as he carefully enters, assesses, and, just as he's about to quit, finds a box containing two mysterious pieces of jewelry, one a Cartier broach familiar to him, and the other a small construction of strange beauty that he can't quite identify. This seems strange as we learn that his greatest asset is his fine eye for quality. “Ever since my mentor Herbie Mott taught me the rules of burglary, I've practically salivated at the sound of something rattling in a small box” thinks Bender, as he hear's a car returning, pockets the box, and quietly leaves by the rear door just as the homeowner returns.

Soon the reader is led into Bender's strange world of killers, fences, fortune tellers, thieves, and other underworld characters, many of whom have figured in his life and share a bond with him. He discovers that his friend and mentor, Herbie Mott, has died under extreme stress while being tortured to reveal...something. Coping with a deep sense of loss at the demise of a man he considers to be a surrogate father, the man who taught him all he knows about his “business,” Bender begins to trace a chain of messages leading to a contract murder through a series of “disconnections.” Each disconnect is carefully designed to build a wall of intermediary steps between the person who initiated the contract and the killer who carried it out. Along the way the reader meets a variety of people living on the “other” side of the law. We quickly come to see them as complex, lively, scary, and even likable people who transcend the cardboard cutout villains populating much crime fiction. They're articulate and funny as well as dangerous. Bender is a sharp judge of the human condition, making many trenchant observations that stop the reader in mid-paragraph to consider the idea and the language used to describe it. This is a sign of really good writing.

We soon meet Bender's ex-wife Kathy and his teenage daughter, the precocious Rina. Kathy describes Bender's appeal as lying in his “decency,” a quality the reader sees quite easily, too. He operates within a moral compass guiding his approach to his outlaw profession. He's an acute observer of the human condition while not making conventional moral judgments about his professional colleagues. The fact that they rob, kill, and deceive doesn't bother Bender if they adhere to the rules of the game as taught by Herbie, even if Herbie didn't quite adhere to them himself. 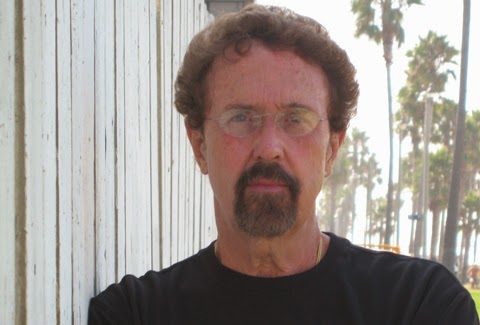 Timothy Hallinann lives about half of each year in Southeast Asia and the other half in California. He wrote songs and sang in a rock band while in college, and many of his songs were recorded by by well-known artists who included the platinum-selling group Bread. He began writing books while enjoying a successful career in the television industry. Over the past fourteen years he has been responsible for a number of well-reviewed novels and a nonfiction book on Charles Dickens. For years he has taught a course on “Finishing the Novel” with remarkable results – more than half his students complete their first novel and go on to a second, and several have been, or are about to be, published. Tim currently maintains a house in Santa Monica, California, and apartments in Bangkok, Thailand; and Phnom Penh, Cambodia. He is lucky enough to be married to Munyin Choy-Hallinan. (profile from Hallinan's web site). Hallinan has developed three successful series arcs. They seem to run their course after six books. Keep an eye out for the concurrent Poke Rafferty series set in Bangkok and, I hope, some more Junior Bender novels.

Herbie's Game (Junior Bender #4) by Timothy Hallinan (Soho Crime, July 2014, 400 pages, $25.00/12.99) allows the reader inside a crime novel through the eyes and mind of a criminal who views himself as a professional making a living rather than seeking to present the criminal as a socio-path devoid of human concerns and sensibilities. He sees his world with a high degree of clarity while being emotionally and professionally attached to it. Junior Bender, the protagonist of this series of novels, is humane, accessible, and enjoyable. Highly recommended. I read Herbie's Game as an electronic galley supplied to me by the publisher through Edelweiss. I read it on my Kindle
Posted by Ted Lehmann at 9:00 AM