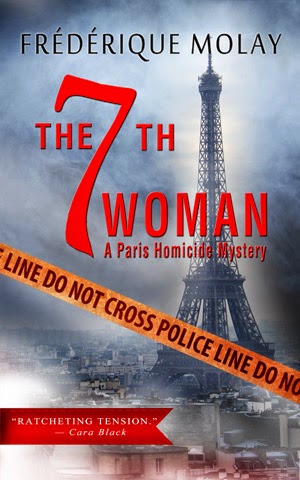 The 7th Woman by Frédérique Molay translated from French by Ann Trager (Le French Book, 249 Pages, $16.95/$9.95) is a gripping police procedural with huge and successful elements of sheer terror built in as the plot races along to a not clearly seen, yet satisfying ending. Nico Sirsky is the Head of the Paris Criminal Investigation Division, referred to as le Crim throughout the book, an elite corps of high quality detectives supported by crack teams of specialists in a range of disciplines. As with any novel dealing with French government, understanding and learning to think within a vast and complex bureaucracy is part of the early challenge and fun of this book. As the story opens, Nico is visiting a physician for some pain in his stomach he has been experience, but on first impression is is overwhelmed by the beauty of Dr. Caroline Dalry, who examines him and prescribes further tests. On leaving Dalry's office, he receives a call from one of his subordinates informing him of the gruesome murder of a young woman.

Sirsky joins his team at a posh Paris apartment where to victim has been killed in a particularly brutal and obviously ritualistic fashion. Sirsky intuits a possible serial killer. Meanwhile, his life is complicated by conflicts with his ex-wife, the needs he feels to be fair in the shared custody of their son, as well as a prying sister intent on finding the right woman for him. His life is not made any easier by his growing awareness of his interest in Dr. Dalry. On Tuesday a second murder occurs, and on Wednesday still another, with each one beginning to suggest some personal vendetta aimed directly at Sirsky himself. He and his team work feverishly to solve the mystery as the murders continue and the noose tightens. To much explication would ruin the fun in this story. Suffice it to say that Molay succeeds in creating the kind of tension that, for me, becomes almost unbearable in a good crime thriller. The exquisite tension forces to to put the book down from time to time to give myself a break, while I'm also ineluctably drawn toward getting on with coming events driving toward a thrilling conclusion. Molay successfully drops successive clues to the reader while never tipping her hand completely. It don't get much better than that! 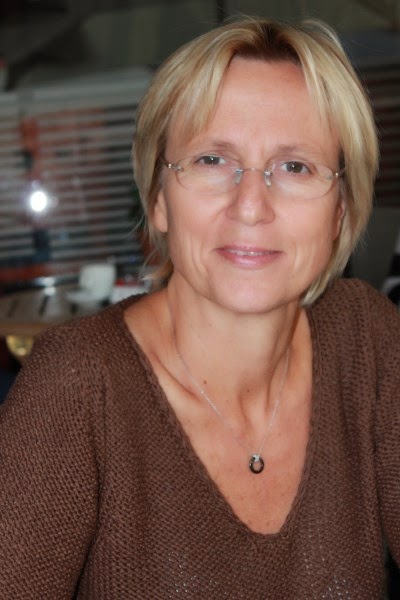 Writing has always been a passion for Frédérique Molay, author of the international bestseller The 7th Woman. She graduated from France's prestigious Science Po and began her career in politics and the French administration. She worked as Chief of Staff for the Deputy Mayor of Saint-Germain-en-Laye, and then was elected to the local government in Saône-et-Loire. Meanwhile, she spent her nights pursing a passion for writing she had nourished since she wrote her first novel at the age of eleven. After The 7th Woman took France by storm, Frédérique Molay dedicated her life to writing and raising her three children. She has five books to her name, with three in the Chief Inspector Nico Sirsky series and a fourth on the way. The 7th Woman, first published in French in 2007, is the first in The Paris Homicide Series with another episode, Crossing the Line, scheduled for release later in September.

Books in translation are often problematic, leaving the question, “Whose book is this?” Here's what Ann Trager says about her work, “I love France so much I have lived there for 26 years, and just can’t seem to leave. It’s not the baguettes that keep me there (I'm sans gluten), but a uniquely French mix of pleasure seeking and creativity. Well, that and the wine. All that time, I had been working in translation, publishing and communications. Then, in 2011, I woke up one morning and said, “I just can’t stand it anymore. There are way too many good books being written in France not reaching a broader audience.” That’s when I founded Le French Book to translate some of those books into English. The company’s motto is “If we love it, we translate it,” and I love crime fiction and thriller “ While I don't read French, I suspect that Trager manages well to maintain a French aura while translating into rapid-paced, colloquial English.


The 7th Woman by Frédérique Molay translated from French by Ann Trager (Le French Book, 249 Pages, $16.95/$9.95) is a fast-paced police procedural with plenty of tension and significant sub-plots. First published in France seven years ago, it is the first of a forthcoming series subtitled The Paris Homicide Series. It has a distinctly French sensibility to it, which increases, for me, its establishment of an independent identity among crime fiction titles. I look forward to reading the next episode. The 7th Woman was provided to me by the publisher through Edelweiss. I read it on my Kindle.
Posted by Ted Lehmann at 11:00 AM