A Nail Through the Heart by Timothy Hallinan - Book Review 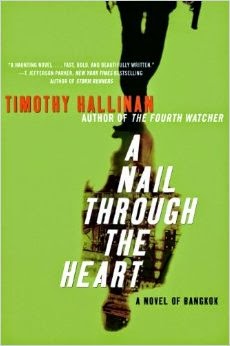 I came across Herbie's Game, the fourth in Timothy Hallinan's Junior Bender series and reviewed it in August. I was attracted to the character, an unusual take on the detective novel in which the protagonist is a “professional” thief who solves problems for others who function outside the law. This was such an interesting take on crime and criminals I decided to keep an eye out for more Hallinan books. Sure enough For the Dead, the most recent in his, so far, more widely known Poke Rafferty series, set in Bangkok, was available, and I ordered it, read it, loved, and reviewed it. Next I checked out the local public library, which had The Fear Artist available for a two week download, which I quickly consumed, too. Which brings us to A Nail Through the Heart, the first novel in the Poke Rafferty series.

During my reading life, there have been a few writers whose work with a single character so consumed me I decided to read them all, more or less in order. John D. MacDonald's character Travis McGee was the subject of more than twenty novels set in Florida. Not a “private eye,” McGee characterized himself as “salvage consultant” and, surrounded by an interesting continuing cast of characters, developed the idea of the long running, serial character in crime fiction. Robert B. Parker's Boston detective Spenser (no first name) was a literary tough guy, both gentle and dangerous. Parker's prose was spare and the books a very fast read. The Aubrey/Matarin series of naval adventure novels by Patrick O'Brien set in the 18th and early 19th century starred sea captain (and later Admiral) James Aubrey and his ship's surgeon Stephen Matarin and twenty-one novels that combined exploration and adventure with fine writing. The Richard Sharpe series by Benard Cornwell follow the adventures of a soldier from a lowly grunt in the ranks to top commands during the Napoleonic wars. Not as intellectually satisfying as O'Brien, they nevertheless drew the reader in and then kept him (I guess mostly hims, but I wouldn't count on it.) reading through twenty-four volumes. James Lee Burke's Louisiana-based alcholic detective filled with anger and violence Dave Roubicheaux also attracted me through most of his twenty novels. While I've read multiple books by others, these writers represent highlights in my light fiction reading. I welcome Timothy Hallinan to this distinguished list. Interestingly enough, most of these fine writers kept my attention only through a central character. Hallinan has so far created three major characters, two of whom are currently running concurrently and both attracting readers with very different perspectives.


I decided to purchase the entire body of Poke Rafferty and Junior Bender novels as used books using Thrift Books, an online used book store as my source. (Thrift Books is, indeed, thrifty, with an easy to navigate interface and extremely low prices. I bought seven volumes in trade paper or hardback for about $4.00 a piece with free shipping. They arrived quickly and, while not new, are in good enough shape for both Irene and me to read them and then drop them without regret at campground libraries. It's a good deal.) A Nail Through the Heart is the first novel in the Poke Rafferty series. A benefit of reading series books in order is to see how the character and the author develop through the arc of the series. Thus I was surprised as I picked up Nail to discover Poke, who arrived in Bangkok as an itinerant travel book writer specializing in books exploring the more seemy aspects of Asian countries, already fully established with his girlfriend Rose, a former dancer and prostitute from the Patcong entertainment area of Bangkok. They live with a former street kid named Miaow. Since I had encountered them in different relationships in For the Dead, I was surprised to see them there at all.


When I wrote a note to Hallinan about this, he answered, “When I first got the idea for the series I wanted to make it clear from the outset that they weren't a me-love-you-long-time stories in which gorgeous nubile brown girls fall head over heels with uninteresting middle-aged white men. I had the idea for Poke while walking Bangkok, slums and all, on New Year's Eve 2002 and the moment I thought of him I realized he was married and fiercely in love with his wife. While I was writing my first series I was befriended by a little street girl who saw me writing in a restaurant and was hypnotized by my laptop, which were very rare in the early 1990s. Her name was Miaow, and we met up a few times a year for about three years until she disappeared. I figures if I put her in the books I could give her a happy ending, which I doubted life had given her. So Rose and Miaow entered the series during the first 10 minutes I was thinking about it, although they're not married in NAIL.” So much for the presence of both characters in the first Poke book, but that doesn't mean there isn't any room for growth and change there. Poke wants to marry Rose and adopt Miaow. In the midst of an increasingly convuluted plot, with Rose ready to take herself home for the night and an offer of marriage on the table, she opens the issue of their relationship in terms of Poke's past, her previous life, which she will always carry with her. She says she can't as the American Poke would like, “be fixed.” This rivetting scene defines the situation and shines a light on how Poke and Rose will continue to define and develop their relationship to themselves and others throughout this book and those to come, taking on the importance and nuance making this series exceptional.

Meanwhile, Poke's perhaps naïve view of the seamy side of Bangkok is challenged as the reality of the evils of child pornography and sex slavery, which make Bangkok the sex capital of the world, are elements he seeks to deny in his own relationships and he must confront them to reach a satisfactory resolution he and they can live with. All this takes place within the context of official corruption in the Thai police and torture going back more than a generation. Hallinan packed a lot of content into this initial Poke novel, which may be why the plot seems a little too thick at times. Regardless, the loose ends get tied up in a satisfactory fashion, and I'm eager to read the next volume as soon as Irene finishes it. 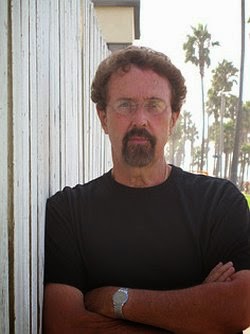 Timothy Hallinann lives about half of each year in Southeast Asia and the other half in California. He wrote songs and sang in a rock band while in college, and many of his songs were recorded by by well-known artists who included the platinum-selling group Bread. He began writing books while enjoying a successful career in the television industry. Over the past fourteen years he has been responsible for a number of well-reviewed novels and a nonfiction book on Charles Dickens. For years he has taught a course on “Finishing the Novel” with remarkable results – more than half his students complete their first novel and go on to a second, and several have been, or are about to be, published. Tim currently maintains a house in Santa Monica, California, and apartments in Bangkok, Thailand; and Phnom Penh, Cambodia. He is lucky enough to be married to Munyin Choy-Hallinan.(profile from Hallinan's web site). Hallinan has developed three successful series arcs. They seem to run their course after six books. A new Poke Rafferty book called The Hot Countries will be out in 2015 and a new Junior Bender called King Maybe is in process


A Nail Through the Heart by Timothy Hallinan (Harper, 2007, 328 pages, $12.21/9.95) is the first novel in the Poke Rafferty series set in Bankot, Thailand. It is a thoroughly engrossing beginning to a first-rate series of novels featuring Rafferty. While it is unnecessary to read the novels in order, I enjoy doing so, once I've discovered a writer whose work intrigues me. Rafferty operates in a morally ambiguous world where he is an alien looking in. He grows through the events in this book and throughout the series. I bought the book as used in trade paperback format. I recommend it highly.
Posted by Ted Lehmann at 2:46 PM