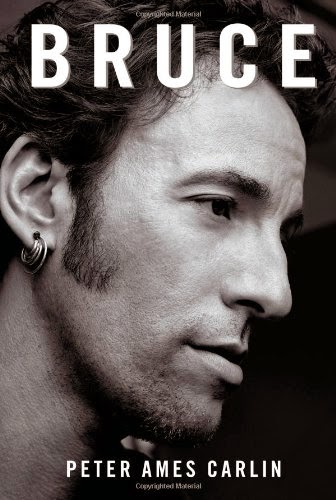 Bruce by Peter Ames Carlin (Touchstone, 2012, 512 pages, $28.00/7.99) is a stunning biography bringing the life, legend, and reality of Bruce Springsteen to a work the exceeds celebrity writing and easily reaches the status of literature. Literary theory says that each reading of a book becomes the joint creation of the author and the reader. In the case of Bruce, as I experienced it, this creation becomes ever so much more complex. Carlin's use of carefully controlled verbal rock 'n' roll riffs seems improvisational while carefully constructing a bond between reader and text turns the book itself into an extended Bruce Springsteen concert. Having the recordings of the full breadth of Springsteen's concert and studio recordings simultaneously in my ears as I read only served to strengthen the effect. Reading the book moved from being the intellectual exercise I sought and expected into as full-blown broadening experience and realization of the person and artist Bruce Springsteen is all a reader could ask.

The outlines of Bruce Springsteen's life are all there. Virtually every American who's even marginally aware of what has happened in popular culture for the past four decades is at least marginally aware of the young man who came out of South Jersey and the Jersey Shore to explore the blue collar world with vivid color and nearly endless detail, how a person of limited background and nearly no formal education became the spokesman for a generation of rebellious young people caught up a changing nation's continuing urge to find and redefine itself. Springsteen, in overwhelming music and vigorous language made statements and asked questions as a torrent of songs and nearly endless tours were punctuated with periods of creative energy whose full depths remains to be fully mined while that energy continually defined and redefined the artist himself and the role of rock 'n' roll music. As Springsteen rounds into his fifth decade as a performer, with over 125,000,000 album sold and seen live by millions of fans around the world, new ideas and sound and music is still gushing forth. While money and fame are always in the background, the real emphais in the book lies in Springsteen's invention and discovery of himself, always from the fringes of society, while observing the life he himself is living. Carlin captures this quality of lonliness and being the the “other” within Springsteen as he delivers the man, his environment, his friends and lovers, and the America is fully lives in while remaining apart and observing it.

Raised in what might charitably be called lower-middle-class circumstances in Freehold, New Jersey, just a few miles west of Asbury Park where he would cut his musical teeth and create the Springsteen legend, Bruce's family life was darkened by mental illness and perpetual flirting with poverty. He grew up a loner, uninterested in school and, after receiving his first guitar, anything else but music. Early on, the only place he found he could express himself was through his playing and song writing. Social skills and articulate self-understanding would only come much later. Nevertheless, for those who were looking, his articulate expression of his search could be found in his music, while his electric attraction was beginning to be recognized, even in the bands he joined as a teenager. Others would become attached to him, and he to them, in loyalty and by the contracts he committed himself to before reading them, and many remained loyal to Bruce and his career long after he had moved beyond them. The entrance of Jon Landau, a relationship running through the book, motivates Bruce break free of the other-serving contracts and build a business life consonant with his musical creativity. Landau as critic, friend, adviser, and manager appears as crucial to Springsteen's becoming a world-wide phenomenon.

Carlin writes about Bruce's “bat-eared attention to sonic detail.” The story of Springsteen's writing, recording, mastering, and finally releasing “Born to Run” becomes the biography of a ground breaking record as well as a gripping chapter detailing the ecstasy and agony of genius. Within the context of the book, Bruce's life from the beginnng to the release and reation to “Born to Run” covers nearly 200 pages of the 464 page text, keeping the emphasis where it belongs...on the development of a unique and game changing artist. Meanwhile, Bruce's own increasing self-awareness, maturity (musical, social, intellectual) opened hmm to finding himself with new songs, associations, musical and personal partners, and to find a way to separate himself from South Jersey and, of course, the ever essential E-Street Band while always returning to the well for renewal and using both the people and the region as a touchstone for his values and understanding of the world. Always a risk taker, Springsteen released solo albums featuring an entirely new reflective view of his rock 'n' roll world along with his ever-broadening musical horizons and political awareness. With the great Clarence Clemmons and Steve Van Zandt on one side and Jon Landau along with several producers and engineers on the other, Springsteen learned to express and develop a world built around his own lonely search for love and acceptance, both internal and external.

A Note on the Reading: I'm not a lifelong Bruce Springsteen fan nor a broad-based connoisseur of rock music. I've written about my own musical development elsewhere and won't detail it here. I've seen Springsteen live as well as Bob Dylan and Paul Simon and was a huge fan of Harry Chapin, but riding in the car with our kids, I often, as a driver, vetoed their musical choices and don't consider myself anywhere near an expert on rock 'n' roll. Yet I loved this book, highly recommend it to others, and I learned a lot. The secret for me has been thoughtful use of Spotify and Wikipedia as I read. Neither of our sons would have needed to do either, but for me they were invaluable. I listened to Bruce Springsteen's recordings, more or less chronologically, as I read. Sometimes, I kept the music in the background, while at others I stopped reading to listen closely to the stories the Springsteen weaves and the music surrounding it. Sometimes I went to Wikipedia to bring myself up to speed on the supporting cast of characters. After finishing the book, I went to You Tube to look at some live performances and listen to them. I'm still not a Springsteen expert by any stretch of the imagination, but my enthusiasm for him has been fired up, and given these resources and the online ones (referred to in Carlin's Acknowledgments) there's more than enough for me to continue informing myself. I see this approach to reading books about music as a template for my future reading. Now...all I need is some good playlists keyed to each book. Maybe...... 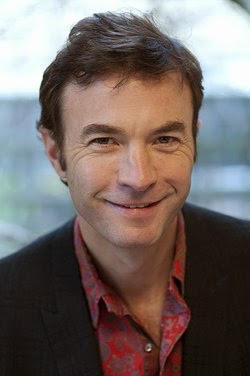 Peter Ames Carlin is a journalist, critic and author. Previously a free-lance writer, senior writer at People magazine and a TV critic for The Oregonian newspaper, his work has been published in the New York Times Magazine, the Los Angeles Times Magazine, the Times (UK), Men's Journal and the British music magazine, The Word. He is also the author of Bruce, (Touchstone, November 2012), Paul McCartney (A Life) (Touchstone, November, 2009) and Catch a Wave: The Rise, Fall and Redemption of the Beach Boys' Brian Wilson (Rodale, 2006).

A professional writer since 1985, Carlin has written about a wide variety of subjects. His 2009 investigation of financial and identity fraud conducted by TV news executive Jeff Alan spurred a year-long federal investigation that sent Alan to federal prison. Still, Carlin's work has focused mostly on popular culture and music.
Carlin lives in Portland, Ore. with his wife and three children.

Bruce by Peter Ames Carlin (Touchstone, 2012, 512 pages, $28.00/7.99) is an admiring, brilliantly written biography of an American icon that never ignores or papers over its subjects foibles, weaknesses, or shortcomings while placing his life and music into the larger cultural context where it belongs. Carlin manages to pull this off with writing that is rich with allusion, strong character development, and deep understanding. He has had extensive access to almost all the major (and many minor) people figuring in Bruce Springsteen's life while never falling into the tropes of “authorized” biographies. The contributions of individuals are carefully mentioned internally, although future scholars and serious readers will rue the absence of footnotes. Carlin mentions the wealth of available online resources. Nevertheless, the book often reads like a novel in its immediacy and sense of development. It should serve as a model for contemporary celebrity biographies. Bruce was a gift and I read it in hardcover.