Nantucket Fivespot:A Henry Kensitt Mystery by Steven Axelrod (Poisoned Pen Press/Ingram, January 2015, $18.27/10.85) the second in the Henry Kensitt series of mysteries set in on Nantucket Island over a long fourth of July weekend, at the height of tourist season. This police procedural shows great promise and contains several strong and interesting characters, a wonderful feel for the tensions and relationships between a summer community and the indigenous population of a resort area, and strong plotting, as well as a cross country love story that promises to somehow continue. The book has particular appeal as beach (and front porch mountain) reading for denizens of such places.

Henry Kensitt has come to Nantucket Island, an old and well-known summer community on an island off the coast of Massachusetts, which is often the preferred summer destination for the cream of American politicians, publishers, celebrities, and artists, making it a good destination for tourists and terrorists. Kensitt has established himself with the local business and artistic community (he dabbles in poetry) and is generally well-liked and accepted, despite having only arrived on the island within the past few years after something of a career changing experience on the west coast. As the novel begins, a bomb explodes killing several people and alerting Homeland Security to a major threat. Former associates from the west coast, antagonist Jack Tournavitch and Franny Tate, with whom he enjoys an unconsummated but happily remembered almost relationship. The convoluted plot also includes a shadowy character named Zeke Beaumont who first appears in an army brig and who comes increasingly into focus and proximity as the novel progresses. Axelrod successfully captures the locals/off-island antagonisms as well as the pervasive sense of government intrusion that our current terrorist environment produces. His set pieces are well-structured and develop both dramatic tension and continued interest. He successfully negotiates the current trend towards gender equity and the tensions between job pulls, tensions and dangers with the family orientation, which I'm beginning to see increasingly in the detective mysteries I'm reading. His children are lively and believable, as are the tensions between characters and their exes. 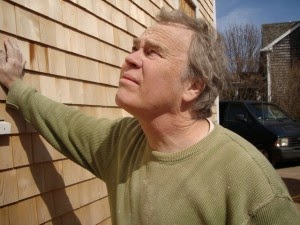 Steven Axelrod holds an MFA in writing from Vermont College of the Fine Arts and remains a member of the WGA despite a long absence from Hollywood. His work has been featured on various websites, including the literary e-zine Numéro Cinq, where he is on the masthead. His work has also appeared at Salon.com and The GoodMen Project, as well as the magazines PulpModern and BigPulp. A father of two, he lives on Nantucket Island, Massachusetts, where he paints houses and writes, often at the same time, much to the annoyance of his customers.

Nantucket Fivespot:A Henry Kensitt Mystery by Steven Axelrod (Poisoned Pen Press/Ingram, January 2015, $18.27/10.85) is an engaging and enjoyable police procedural with a family orientation which takes place on Nantucket Island over the fourth of July weekend. It captures the feel of summer communities existing in a context of hard working (and drinking) locals and privileged outsiders. While perhaps introducing a few too many plot lines to keep from confusing readers (I'm not sure why Bulgarian gangsters and a scheming hooker are necessary) the book has sufficient narrative drive and compelling enough characters to keep readers interested through to the heart pulsing conclusion. I received the book as an electronic galley from the publisher through Edelweiss and read it on my Kindle app.