Benjamin Franklin and the Ends of Empire by Carla J. Mulford - Book Review 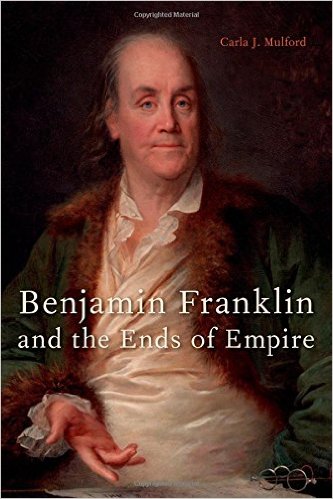 Benjamin Franklin and the Ends of Empire (Oxford University Press, 2015, 448 pages, $65.00/$34.45 is a literary biography, which, unlike traditional biography, places its emphasis on what a person thought and how those ideas were formed throughout a life of reading, and writing and conversation. Thus the impact of an individual is presented through his internal life rather than more conventionally through what happened and how it was accomplished. As such, the book that results is not usually filled with high drama. Carla Mulford's thorough and challenging assessment of Benjamin Franklin, as his ideas about being a Boston-born Briton developed during his long and eventful life in the colonies, as a diplomat in England and France during the eighteenth century, however, creates an internal drama in the reader as Franklin grows and changes, emerging as the intellectual center of the events surrounding the invention of America.

Mulford thoroughly traces Franklin's rich family background in England as they struggled to maintain their conscience and religious liberty in a time of revolutionary unrest that resulted in the beheading of a king and the long struggle between Catholic and Protestant elements. His family were dissenters enough to seek to move to Massachusetts and associate themselves with the Puritans in the late seventeenth century. Franklin (born in 1706) was apprenticed to his brother James, a printer, when he was twelve years old and soon emerged as a skilled writer, growing from his voracious reading. His vocation merged with his internal views of the world as he precociously began writing about the turmoil bubbling up in Boston. He moved to Philadelphia when he was merely seventeen, established his own print shop, which remained the base for publishing his writings. Mulford follows the outcome of his reading and thinking as he transits from a local political and social voice to world fame as a scientist, diplomat, ideologist, and political thinker.

Throughout his long life, he continued to develop his ideas about conscience, the root of wealth in the labor of the hands and fields, the importance of religious liberty, and the responsibility of the state to function for the good of the governed. The Ends of Empire in the title of Mulford's book refers not to the revolutionary period leading to the establishment of the United States, but to the purposes that empire should fulfill as it spreads and broadens its influences. Thus, as the British Empire became increasingly hierarchical it tended to function to enrich itself and those at the top of its lofty pyramid, viewing the inhabitants of its colonies in America, India, the Caribbean, and Ireland as the source of its income and wealth rather than as semi-independent entities which should be equally represented in the emerging parliamentary system of the home country. Rather than enriching the mother country through their abundance, they were seen as the source of raw material to be exploited as they subjugated themselves to the home country.

Throughout her detailed discussions of Franklin's efforts to continue to stress freedom of conscience, the primacy of agriculture over manufacturing, the importance of maintaining governance growing from close attention to the governed, and the rights of the governed to regulate their own governance through taxing themselves, Mulford charts his increasing frustration at trying to get people in England to understand and appreciate the colonies while having little or no experience of how they actually functioned. Without a clear and living experience of the threat of Indian forces to the West, the difficulties posed by the French, and the independent cast of ordinary Americans who had lived and thrived in an independent fashion, the British governing upper classes and royalty could not (or would not) respond with a world vision leading toward a cooperative empire. Franklin's emerging awareness and influence is presented through his voluminous writings (both public and private) as well as his ability to read and connect to the major thinkers of history and his own time to develop a comprehensive view of the role of liberty and conscience in nation building. Meanwhile, the events in Franklin's life form a framework for his emerging ideas and his struggles to awaken Britain to its own potential for greatness as well as to reconcile his original love of his homeland with his emerging vision of the necessity of independence, both personal and national.

Carla J. Mulford is Associate Professor of English at Penn State University and founding President of the Society of Early Americanists. She has served on the editorial boards of numerous scholarly journals. She teaches and does research in early modern, American, Native American, early African American, and environmental studies. Across her career at Penn State, she has published ten books and over sixty articles and chapters in books on a variety of subjects. She has been a Franklin scholar since completing her doctoral studies at the University of Delaware under J. A. Leo LeMay. She has supervised the doctoral dissertations of a number of scholars who have gone on to careers at other universities. She is recognized as a top Franklin scholar. Carla is also my sister-in-law.

Benjamin Franklin and the Ends of Empire (Oxford University Press, 2015, 448 pages, $65.00/$34.45) is a fine and carefully focused consideration of the influences on Benjamin Franklin's thinking as he became one of the most important political and social theorists as well as a founder of the American idea. It is not a beginner's book about Franklin. Readers seeking to delve deeply into the life of his mind should become thoroughly familiar with his life, first. Franklin biographies by H.V. Brands and Walter Isaacson have been useful to me. Mulford's book, however, will lead you deeper into the world of the mind inhabited by Benjamin Franklin. Her book opened for me a vast and important understanding of some of the factors brought together to create the nation we now have. Some of Mulford's sections are, at least for me, more slow moving than others, as charting the development of thought takes greater time and attention than the events those ideas move. While at times requiring greater concentration and attention, the effort proves worthwhile, as Franklin's complex mind emerges, demonstrating his passion for freedom of conscience, personal liberty, and political self-determination develop from his humble beginnings and flower in his old age with the former being the parents of the latter. This is a scholarly volume, but the eighty pages of notes, footnotes, and bibliography do not intrude on an enjoyable and thorough reading of the content in the text. I highly recommend this book for serious readers seeking to extend their knowledge of Franklin specifically or the important roots of the American experiment in self-government. I own the book, which was a gift to me.
Posted by Ted Lehmann at 8:55 AM