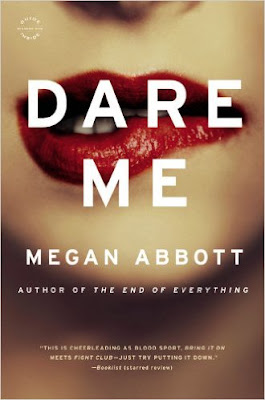 In Dare Me (Back Bay Books, 2013, 320 pp, $1131/9.99), Megan Abbott took me into a world I had never imagined, introduced me to people I only have known peripherally, told a dark, and often frightening, story of love, hate, and betrayal. Finally, I left with less care for the people involved than they deserve and in a place I probably won't visit again. Nevertheless, Abbott's elusive, almost ambiguous prose and driving plot held me, as a reader, until the tumultuous end of this dark, throbbing, mysterious novel.

The story is set in middle America, that is, it could be anywhere there's a high school and a cheer squad. It's narrated by Addy Hanlon, an attractive, athletic high school junior on her school's cheer squad. Beth Cassidy, her best frenemy, for these girls are nothing if not bitter rivals as well as closest friends, is captain of this year's squad until their new coach, Collette French, is introduced and immediately fires her as captain. There ensues a season of training for the final game, to which a recruiter for the regional finals in cheer competition is rumored to be coming, as the team's fortunes rise and fall during practice, with its tough lessons and frequent injuries. French also opens her home to the team, where they gather to smoke and, at least some of them, to drink, too. To complicate matters, members of the team as well as the coach herself, are attracted to a military recruiting team stationed in the lobby of the high school. This over-heated mixture is a certain recipe for troubles to come.

As a former high school teacher, I'm well aware that high school students have always inhabited a world quite different from the one which their parents would like to imagine. Here the world of the cheer squad seems, at least to me, to be hyper-sexualized and intensely inner-directed. The outside world of high school students, things like classes, study, interests other than, in this instance, the cheer squad, drugs, dieting, and boys, disappear within the friendships, rivalries, diets, and loves of the squad members themselves, creating a totally exclusive group. Even, maybe especially, parents are almost completely absent. Large portions of the tensions in the plot are communicated in text messages, which, unless the plot demands it, are never seen by anyone but the recipient.

Abbot's language is direct, realistic, graphic, explicit, and, for some, may be shocking. I've been retired from teaching for nearly twenty years, and schools, by any measure, have changed since I last spent much time in them. But I suspect, even though there's been lots of change, that much went on there that I blissfully ignored. Teenagers, no matter how much we think we know and understand them, exist in a parallel world most of us can't, and probably don't want to, fully share. Abbott places herself within that world with a high degree of verisimilitude. I'm not certain who the audience for Dare Me might be. When I was an active English teacher, I read a good deal of what's now called “Young Adult” fiction, much of which dealt with the real problems of adolescence. Writers like Judy Blume and Chris Crutcher often nailed issues and character with startling effect. Writer and critic Gillian Flynn has said, that Megan Abbott “has created a mesmerizing, modern portrait of teenage life today: Brutal crushes, competing allegiances and first-bloom sensuality, all magnified by the rush and crush of technology." While this could be labeled at "Young Adult," it might just as well be called "Parent Education," or just plain, good writing. 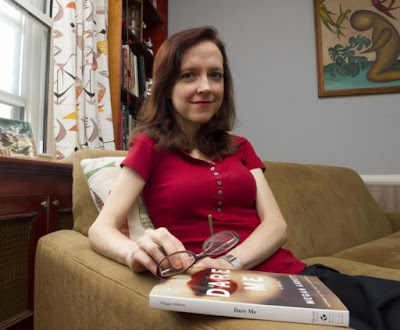 Megan Abbott is the Edgar®-winning author of the novels Queenpin, The Song Is You, Die a Little, and her latest, The Fever, which was chosen as one of the Best Books of the Summer by the New York Times, People Magazine and Entertainment Weekly and one of the Best Books of the Year by Amazon, National Public Radio, the Boston Globe and the Los Angeles Times. Her writing has appeared in the New York Times, Salon, the Guardian, Wall Street Journal, the Los Angeles Times Magazine, The Believer and the Los Angeles Review of Books. Born in the Detroit area, she graduated from the University of Michigan and received her Ph.D. in English and American literature from New York University. She has taught at NYU, the State University of New York and the New School University. In 2013-14, she served as the John Grisham Writer in Residence at Ole Miss. (lightly adapted from Megan Abbott's web site)

Dare Me by Megan Abbott (Back Bay Books, 2013, 320 pp, $1131/9.99) is a problem novel about adolescent girls on a cheer team in a contemporary American high school. It tells the story of the girls on the team, their coach, and the deeply conflicting behavior and motives of many of them. It features graphic behavior and deep psychological trauma, which may be characteristic of behavior at some level in today's schools. As with many of today's books exploring adolescent life, many parents might prefer that their children not read Dare Me. On the other hand, for both children and their parents, reading Dare Me may open the opportunities for further teaching and learning about how to function in the difficult and often confusing world we inhabit. Books like these are best approached in an environment of exploration and discovery. The book is distinguished by Abbott's fine writing and vivid use of language some might find offensive. Nevertheless reading it could provide insight to many adolescents and their parents. Additionally, the story features taut and gripping writing throughout. I borrowed the book from my local public library.