The Gibson Brothers at The Flying Monkey - Review 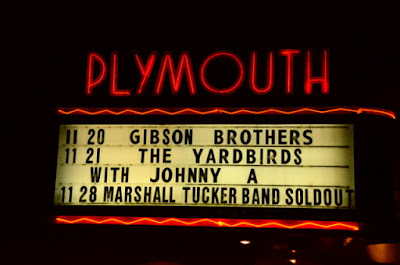 The Gibson Brothers delivered a terrific show at The Flying Monkey in Plymouth, NH on Friday evening, opened by local band NewFound Grass.  The venue is one of the better ones we've encountered for this sort of concert. Once merely a converted movie theater, it's now a dinner theater with the back several rows turned over to table seating with food provided by the quite good Common Man family of restaurants. For those seeking dinner & a show, The Flying Monkey has much to offer, including fine food and great sound. A delightful place to plan an evening of food and music or a film. The Flying Monkey theme refers to the creatures in Judy Garland's The Wizard of Oz, while the lobby is decorated with movie and music memorabilia. 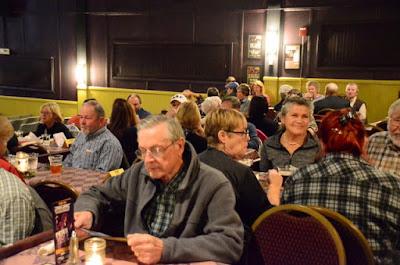 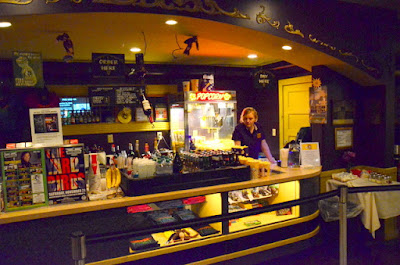 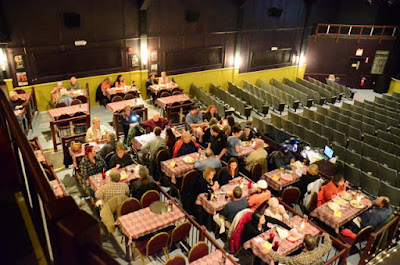 In the Green Rooms 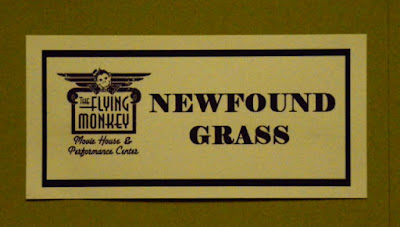 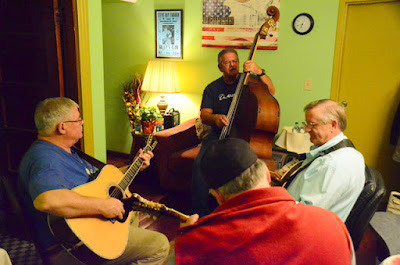 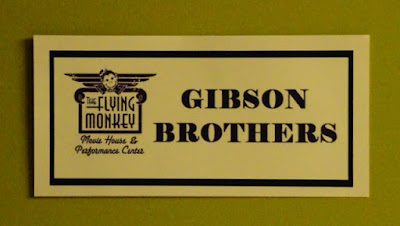 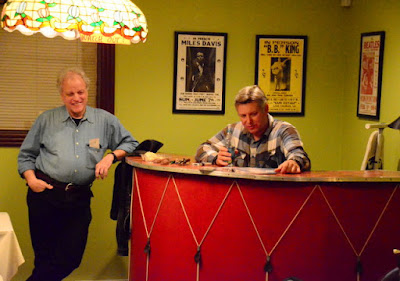 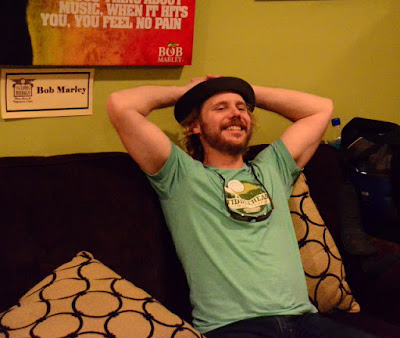 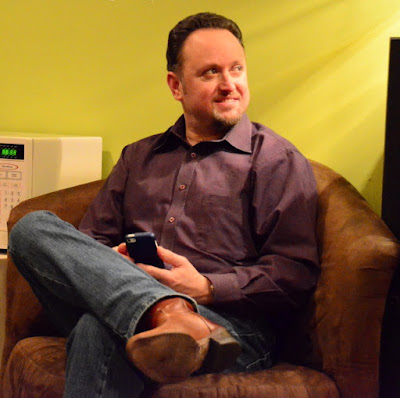 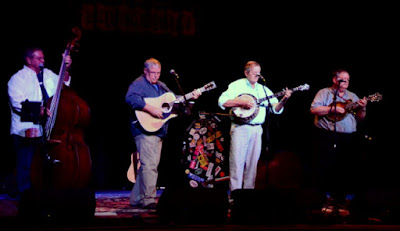 NewFound Grass is a New Hampsire-based band whose members come from a variety of musical backgrounds including bluegrass, jazz, folk, soul, and country. Their eclectic mix is pleasant and their musicianship strong. Members Steve Abdu and Craig Engel are also the promoters of the Pemi Valley Bluegrass Festival, held annually nearby in August. NewFound Grass is quite versatile, having four good singers, who also pick well. They were well-received by the audience. 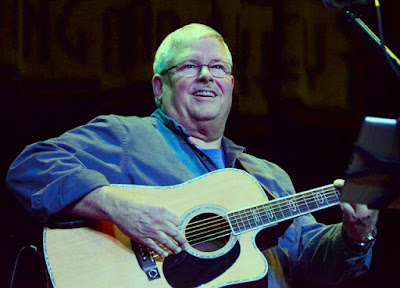 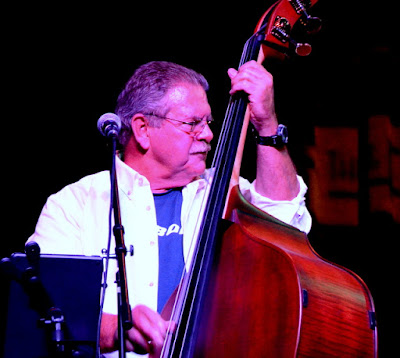 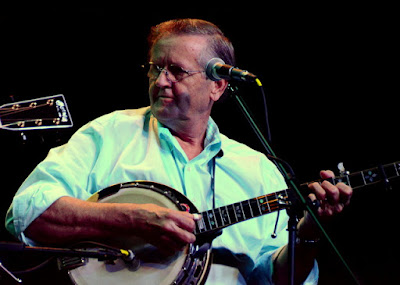 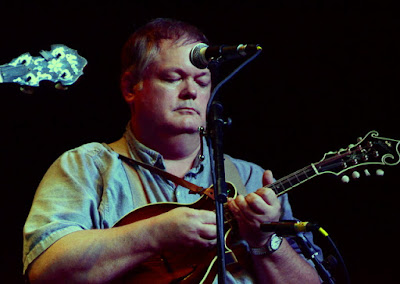 NewFound Grass - Lord I Hope this Day Is Good - Video 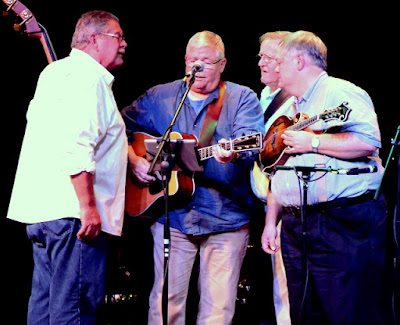 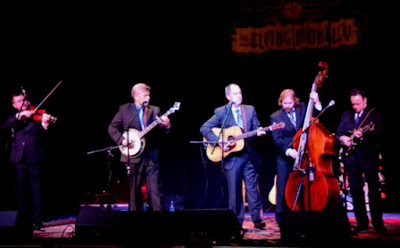 The Gibson Brothers have had a very busy year. Their shows are well-received wherever they go. They've had increasing impact in all corners of the country. They've developed and refined the art of the unscripted show, relying on their feel for the audience and their interaction with each other to govern their pace. They are intense and demanding in their music while being relaxed and audience-centered in their presentation. Their music is as contemporary as today, while always including wonderful covers of Flatt & Scruggs, Bill Monroe, Jimmy Martin, and other first and second generation bluegrass pioneers. They write their own music, which reaches out to their audience because it authentically reflects their own experience. They love each other deeply and fully while their stage show reflects the sibling bickering their audience recognizes and loves. They function so well as a duo, because they've assembled a five piece band that works together as a cohesive unit. They're the complete package. 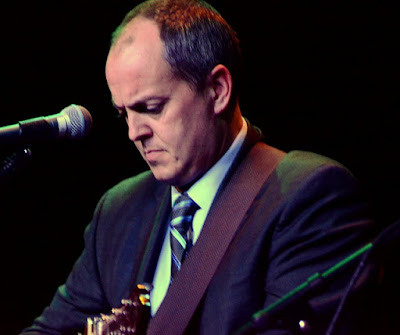 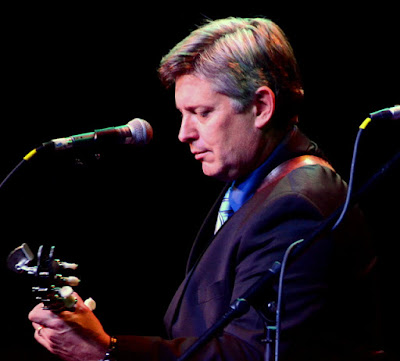 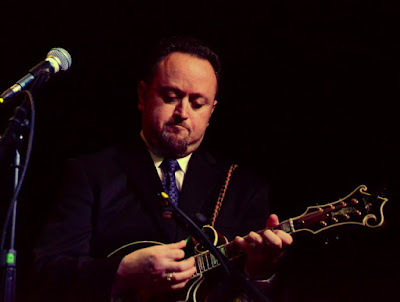 Jesse Brock was named Mandolin Player of the Year for the second time at the IBMA Award Show this year. His presence with the Gibson Brothers during the past three years has lifted the band instrumentally, and, surprisingly, vocally, as his voice has been added on several songs. While the Gibson Brothers are still a brother duo, Jesse's singing has added a welcome dimension. His creative and powerful mandolin play adds drive to an already driving band. 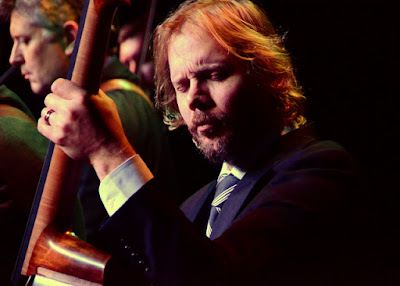 Mike Barber, often called the third Gibson Brother, is a thoughtful bass player whose pushing bass beat, always on Leigh's left shoulder, give a solid backing to everything the band does. The role of a band's bass player is often underestimated, but not in this band. Eric and Leigh are always certain to credit him for his play, as well as his insight and contributions in production, too. He's been with the band since the beginning, twenty-two years ago. 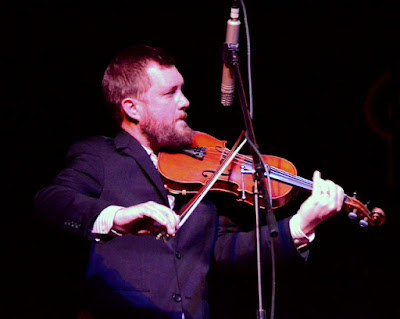 Clayton Campbell's soaring fiddle solos and oh-so-solid back-up on every song, makes him one of the premier fiddlers around. A quiet performer, he's nevertheless always there. His subtle command of the most difficult of all instruments is beyond excellent. While his presence is unobtrusive, his fiddle is always there, always tasteful, always welcome. 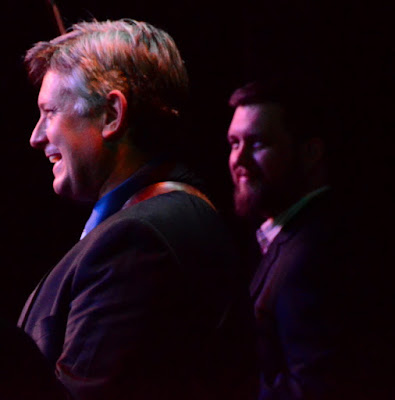 In the instrumental below, pay particular attention to the interaction between Clayton and Jesse. Also, take a look at Eric's banjo play, Mike's driving beat, and Leigh's superb rhythm guitar. This band is mostly noted for its singing and its humor. Here, listen to them as one of the best instrumental bands in the business. 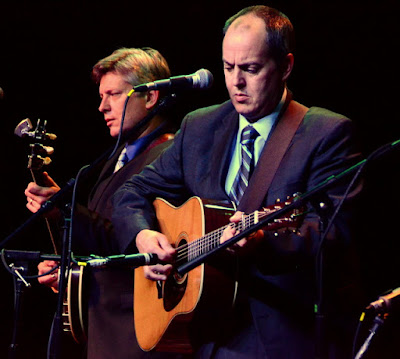 At the Merch Table 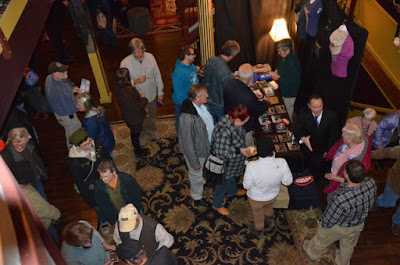 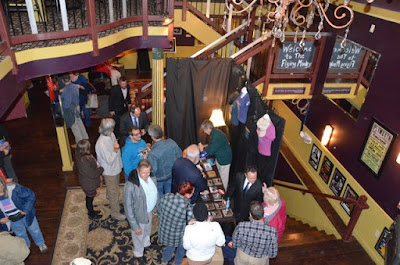 All told, it was a pretty good evening of bluegrass with The Gibson Brothers and our friends from Pemi Valley, NewFound Grass.
Posted by Ted Lehmann at 5:22 PM