The Grand Tour: The Life and Music of George Jones by Rich Kienzle - Book Review 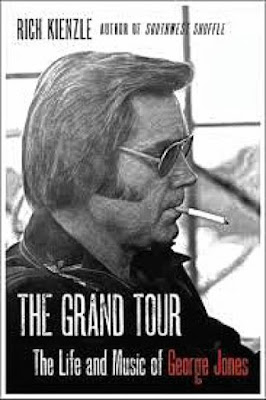 The Grand Tour: The Life and Music of George Jones by Rich Kienzle (Harper/Collin/Dey Street Books, March 2016, 288 Pages, $18.77/14.99) provides an excellent overview of the life and times of George Jones, called, by the New York Times, the “definitive country singer of last half century” and known for years in the industry as “no show Jones” for his propensity to be unable to make it to the stage because of his serious problems with drugs and alcohol. It may also echo the life and times of the country music industry during the decades from the sixties through the eighties, when many, according to an interview we heard recently, the industry floated on an epidemic of drugs and alcohol. While I didn't find much of Jones' life or personality to be much endearing, many of his fans will excuse his behavior for the greatness of his mammoth catalog of hit songs which persist, being frequently covered by country music singers everywhere. I found the book and the man to be both sad and distressing.

George Glenn Jones was born in 1931 during the depths of the depression in the Big Thicket region of east Texas, a heavily wooded region lying along the southeastern edge of Texas bordering on Louisiana. This is a region where, when the turpentine and logging industry wasn't doing well, the moonshine business thrived. Jones' father, a violent alcoholic himself, was prone to responding to upsets in the world by beating his wife and children, which, according to Kienzle, lay at the base of Jones's own lifelong difficulties with drugs and alcohol. Music, however, was always a feature in his life, as his father played guitar and harmonica, while his mother was a church pianist in a Pentacostal church, leading Jones' toward his base in both country and gospel music which dominated his life.

Perhaps the most interesting element of this book, for me, lay in the insights into the recording industry, when that industry was ruled by large commercial labels, as it emerged during the fifties and sixties, from small, regional outlets recording in primitive studios music aimed at narrowly focused regional audiences, in Jones' case, of white, working class fans who heard him playing largely in honky-tonks and bars. As his success as a performer grew, he moved to Nashville, where the country music recording industry was centered, working for larger and more prestigious labels. He decried what he saw as the breakdown of traditional country music into an “urban cowboy smooth style represented by the rise of singers like Kenny Rogers and Garth Brooks, including even Dolly Parton, as she became a movie star in the eighties. As in bluegrass, the move from its rough, rural origins to suburban comfort in the U.S. Demographic profiles created fissures in the business which disturbed and angered Jones. Kienzle, prone to comments like “scared the shit out of him,” substitutes coarse language for serious analysis at times. Jones' work became the “gold standard” for a movement during the eighties which Kienzle refers to as New Traditionalism, represented by Dwight Yoakum, Ricky Skaggs, Keith Whitley, and Patty Loveless.

Meanwhile, Jones' personal life can only be described as a mess. He was married several times to women whose influence on him was negligible. His marriage and professional association to/with Tammy Wynette created great music, but never contributed to his achieving a more adult lifestyle. He bought and sold large tracts of land with the idea of developing music parks, which never quite panned out. Jones was prone to buying and either giving away or wrecking cars and yachts, never learning to live in a responsible way or manage money. He was frequently sued and usually lost. His last wife, Nancy Sepulvado, seems to have helped him, with the help of several admittances to rehabilitation institutes and hospitalizations, to forego drugs and learn better to manage his drinking. Often plagued with ill health, Jones still managed to live into his 81st year, dying in 2013. He is remembered and celebrated as one of the all-time greats of country music history. Songs like He Stopped Loving Her Today and The Grand Tour have become staples of country music and bluegrass.

Veteran country music critic, journalist, and historian Rich Kienzle is the author of Southwest Shuffle: Pioneers of Honky-Tonk, Western Swing, and Country Jazz and Great Guitarists: The Most Influential Players in Blues, Country Music, Jazz and Rock. A contributing editor and columnist at Country Music magazine for nearly twenty-five years, he also edited their history publication The Journal. He was formerly a contributing editor at No Depression and Guitar World and is now a regular contributor to Vintage Guitar Magazine. His work has appeared in Fretboard Journal, Guitar Player, Request, The Journal of Country Music, and the Austin American-Statesman. The author of liner notes for almost four hundred reissue albums, Kienzle is among the few country journalists profiled in The Grove Dictionary of American Music. He received the International Country Music Conference’s Charlie Lamb Award for Excellence in Country Music Journalism in 2012. (from Harper Collins author biography)

The Grand Tour: The Life and Music of George Jones by Rich Kienzle (Dey Street Books division of Harper/Collins, March 2016, 288 Pages, $18.77/14.99) is a reasonably thorough account of George Jones' life which makes no effort to paper over his personal demons and deep flaws. Who can tell whether those flaws contributed to the depth and emotional impact of his singing or fatally damaged his output and his life. Certainly, his record as a husband and father were evident to everyone who knew anything about him. Nevertheless, George Jones' reputation as an icon in country music only continues to grow. I read the book as an electronic galley provided to me by the publisher through Edelweiss. I read it on my Kindle app.