Shelby, NC lies near the center of the bluegrass world, at least the one Irene and I have lived in for the past twenty years. Located in Cleveland County, on the South Carolina border. Shelby is near the birth place of Earl Scruggs, it emerged from the rich history of migrations from Appalachia to the mill towns of the South, many of which were located in or nearby.  Shelby was also the home of Dr. Bobby Jones, known to most of the wider world as blogger Dr. Tom Bibey, but in his real life a beloved physician to the local residents, regardless of social position, an avid golfer, a skilled mandolin player active in the local bluegrass community, and, of course, a loving husband and father. 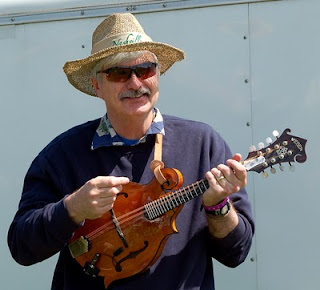 Soon after I began this blog, late in 2006, comments started appearing on it signed by Dr. Tom Bibey.  They were thoughtful and encouraging, while urging me to visit his own blog, which detailed the life of a small town physician, musician, golfer, husband, and father living in a fictitious southern town. After a rather long dance, we finally met, enjoyed each other's company, and began coming to Shelby for increasingly long and treasured visits. Sadly, Bobby Jones died, too soon, in 2012, attacked by a brain tumor. However, we kept coming to Shelby to spend time with the people we came to know through him - his widow Marta, Darin & Brooke Aldridge, Rick Dancy (their friend and guide after Bobby's passing), and many others. Bobby's book, The Mandolin Case, is still available.  A week or so ago, we returned for a ten day stay at our lake cottage, in the nearby John H. Moss Reservoir campground, What follows is a little bit about our stay. 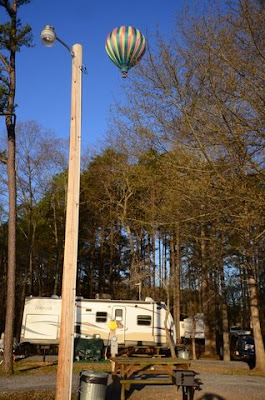 On Wedneday we got a surprise call from our friend Wayne Taylor, who, after a distinguished career as a member, lead singer, and emcee of the U.S. Navy Bluegrass Band - Country Current, has retired to his home in North Carolina where he lives in the country and continues to perform. We met him and his long-time friend Pam Cooper for supper and a catch-up at the local Ruby Tuesday. Wayne is working with several bands and has recently released two CD's, one called The Carnegie Experience, which captures the excitement and music of Flatt & Scruggs. His other CD is called The Great American Country Band, with fine covers of 1970's and 80's country classic songs. With the two bands together, he is touring with a ninety minute show. Contact Wayne Taylor Productions for more information.

As we were finishing our supper, Wayne looked up and said, "Here comes Carl White, now!" Now, this certainly wasn't an accidental meeting, but I quickly was glad that Wayne had invited Carl to join us. Carl White produces a television show called Life in the Carolinas which can be seen on a number of television stations in North Carolina. Some episodes can be seen on YouTube, too. He also writes a syndicated column, and you can subscribe to his newsletter. When Carl shows up, his trusty iPhone comes out, and, suddenly, you're in an interview...and it's fun! Carl has an infectious personality, asks piercing questions, and shows up in interesting places showcasing his home state.
\ 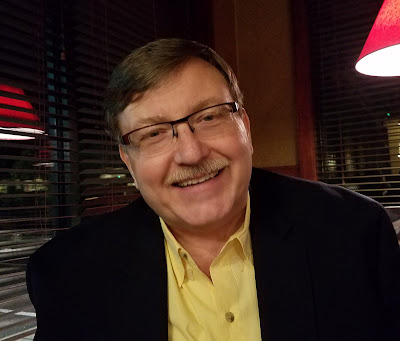 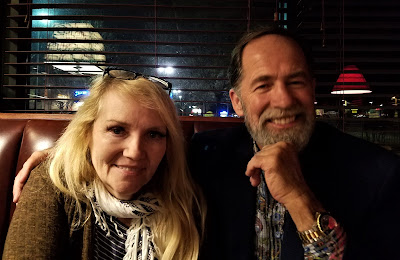 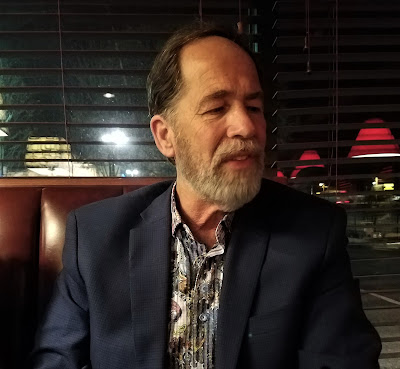 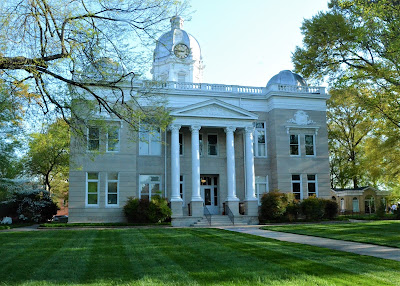 We were first introduced to Darin Aldridge at a jam in a semi-buried cinder block building built during the early fifties when nuclear attack was a legitimate scare in the U.S. The building, known throughout the area as the Bomb Shelter, is home to a regular Wednesday night jam, which Dr. Bobby brought us to. We heard a lot of hot pickers, but Darin Aldridge stood out, along with his fianee Brooke Justice. Since then we've gone to churches, concerts, festivals, small jams, and more as our friendship with Darin and Brooke grew and ripened. Here's an early recording I made of their first band:

Darin has been an integral part of the development of the Earl Scruggs Center since its inception. He helped to prepare some of the exhibits. For instance, it's his hands demonstrating three styles of banjo picking in an interesting filmed display. On Friday morning, he was scheduled to teach two groups of elementary school students about the history of bluegrass. The kids would then go downstairs to the museum, with a series of questions to answer before they reconvened. Below, Darin is preparing his hardware including all three instruments he will play during his presentation, his boom box to play examples of music, which are coordinated with pictures he shows on the big screen behind him. Suffice it to say that few classroom teachers with advanced degrees would have a classroom preparation so well prepared in order to orient students ideas and concepts new to them. 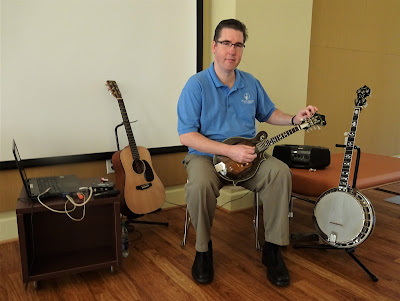 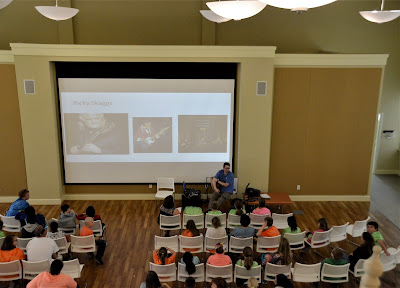 Darin's presentation introduced and illustrated bluegrass music from its country origins with the Carter family and the Big Bang of country music in the 1929 Bristol recording sessions to Chris Thile's leadership of Prairie Home Companion, and much from in between, all in about 40 interesting minutes. He varied pace, means of input, and modes of presentation while providing lots of opportunities for kids and ask questions and interact. His presentation provided a model of preparation and skill for professional teachers. 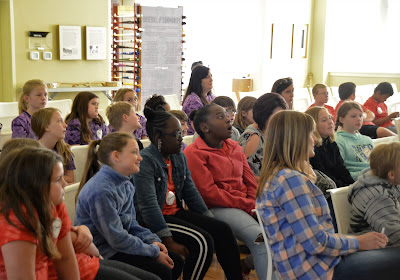 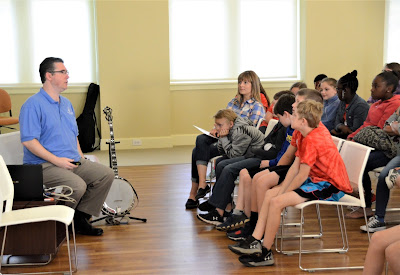 ...While Half the Group Experienced the Exhibits 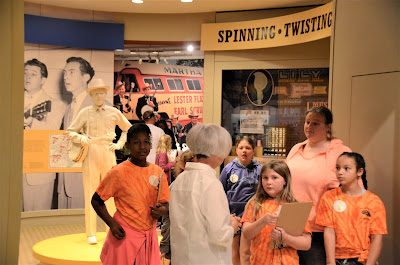 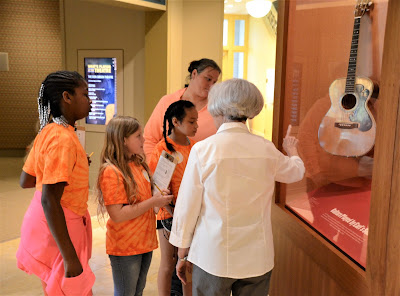 After Darin's presentations ended, the kids, under the direction of a music teacher from their school, sang "My Home's Across the Blue Ridge Mountains" on the Scruggs Center Steps, while their proud parents look on.


My Home's Across the Blue Ridge Mountains 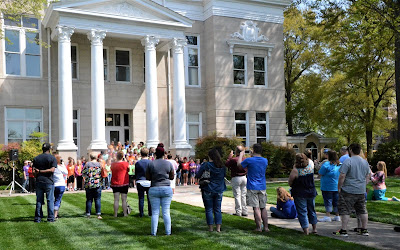 The next day, we had scheduled ourselves to have lunch with Katie Wilson Espenshied and her husband Ace, who many of my readers will remember as they watched her grow up in a family band singing a song they loved, but she grew to dislike, "Five Pound Possum." When I turned the ignition switch to start our truck, it ground away without catching, a problem we had had repaired only two weeks previously at Rountree Monroe Ford in Lake City, FL. Sadly, we had to cancel lunch and call the tow truck, again! 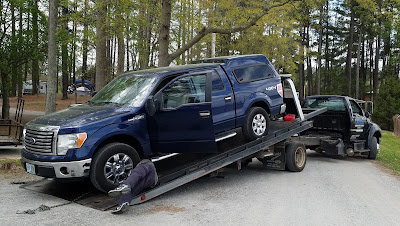 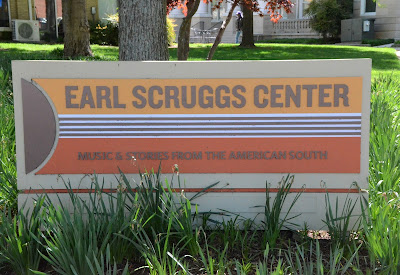 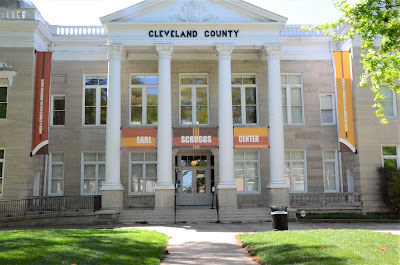 Leadership Bluegrass is an annual intensive professional development program begun in 2000, which each year invites about thirty people from all areas of the bluegrass community to come to Nashville for a very well organized and useful conference of professional and personal development. Over the years, there have been over 400 graduates. Under the leadership of Ron Raxter, a retired attorney from Raleigh, a spring meeting was planned and held on Tuesday and Wednesday as the guests of the Earl Scruggs Center, which offers a large number of music related activities throughout the year under the direction of Executive Director Emily Epley. A group of ten Leadership Bluegrass graduates assembled for two days of discussion and planning. They included artists, a broadcaster, a member of a couple of IBMA Boards, a singer/songwriter, and several others. The discussions were enjoyable, active, and productive, as we sought to find a worthwhile project to pursue as a group for the good of the bluegrass community. More information about this effort will be forthcoming. The event also included an evening at the Newgrass Brewing Company, where those inclined jammed, enjoyed themselves as they enjoyed a beer and a sandwich. We were joined by Brooke Aldridge for a couple of her wonderful songs. Altogether, it was an enjoyable two days of fellowship and purposeful seeking. 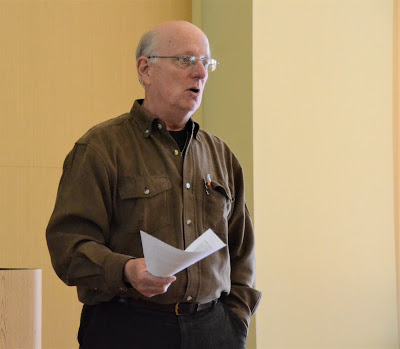 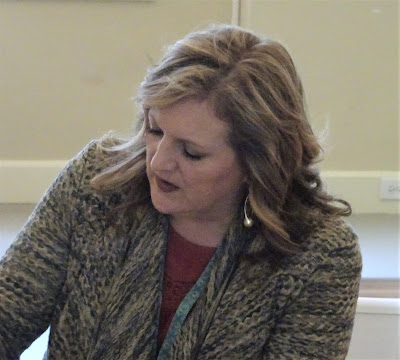 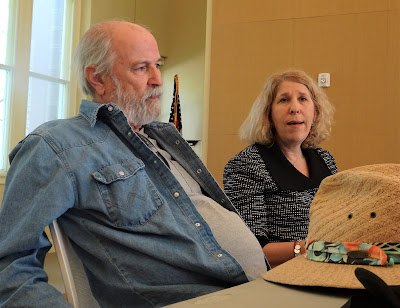 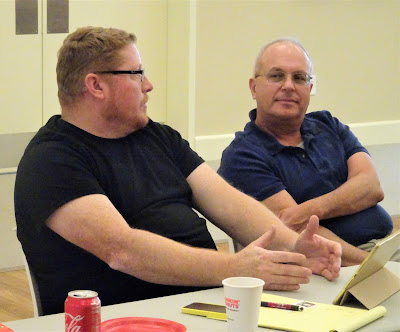 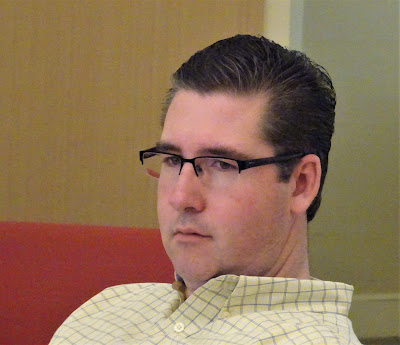 The Group with Earl Scruggs Statue 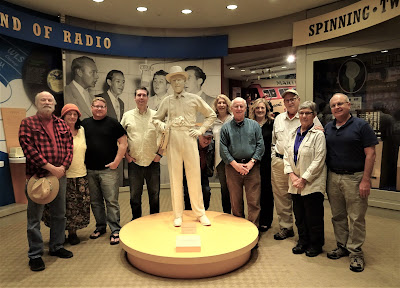 Supper at the Newgrass Brewery 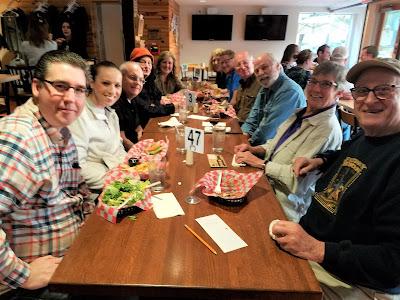 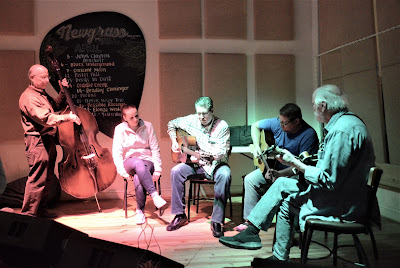