Imagine an almost completely unadorned stage in, for Broadway, an almost small theater, seating only 960 people, an audience Springsteen says is about as small as any venue he's played in the past forty years. Bruce comes on stage in a t-shirt carrying a guitar. He talks, he sings, he plays guitar, harmonica, and piano for nearly two hours, and never loses his audience, either in the theater or in front of their ROKU TV set, not for a second, as he weaves his story in songs and narrative from his many recordings and lovely, evocative writing.

Springsteen isn't an actor, yet strength, character, passion, and warmth come through in almost every word he speaks. His singing is already known to his millions of fans as evocative, raw, rich, and true. As a solo singer, without the richness of his band behind him, the words take on even more power and conviction as he sketches out his life from his awkward and difficult childhood through his long musical adolescence, to his emergence as a true rock star and then the voice of a generation.

Patti Scialfa Springsteen makes a brief appearance, for two songs, about two-thirds of the way through the one act show. Springsteen talks about his youth, his discovery of rock and roll, the power of Elvis on the Ed Sullivan Show, his discovery and invention of the Asbury Park music scene, and his growth as a person and a musician. He talks movingly and deeply about his relationship to his parents, his father difficult and distant, his mother able to dance through life...always positive. And these people are brought to life through Bruce's expressions of love and gratitude to and for them. His special tribute to Clarence Clemmons brought me to tears, as did several other sequences. Others, particularly his first experience driving a car cross-country for his first experience driving, with a stick shift no less, is laugh out loud funny. In short this performance of Springsteen on Broadway provides bang-up entertainment with Bruce Springsteen often opening up in ways seldom seen in concerts and impossible in books. 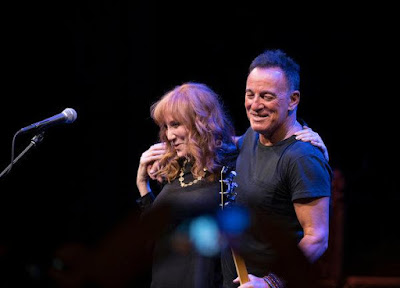 With ticket to live concerts by top rock, country, and pop bands in many venues having posted prices of up to several hundred dollars and scalpers asking and getting over $1000 a seat, the future of streamed major concerts seems to be in the future for many music, and theater, fans. With subscription plans in the $10.00 - $12.00 per month range, and the variety of programming seemingly almost unlimited, streaming seems to be the entertainment value of the present and for quite some time into the future. If you haven't discovered streaming yet, you have a happy surprise in your future, reaching way beyond what's on commercial or even premium cable television.

I can't recommend this concert performance any higher. It offers one of the most entrancing and enjoyable two hours of music and talk I've ever heard. 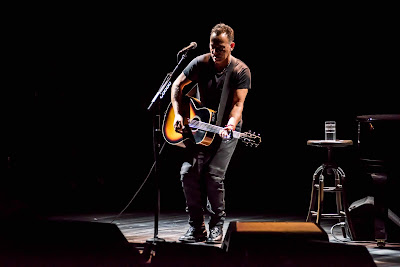