Chasing the Rodeo by W.K. Stratton

smells of old cigar smoke. The great arena is covered with se

veral inches of sawdust and wood chips. The lights go down and then, with a flash, a single spotlight focuses on a gate at the end. It opens and a handsome horse gallops through with a cowboy wearing a great white hat and twirling a lariat around his head mounted on his back. Gene Autry and Champion charge around the ring to the cheers of thousands of young cowboys who’ve never been west of the . It is probably 1947. My folks by me a chameleon in a little cardboard box, which probably dies a day or so after I get it home.

Fifty-some years later, my wife and I are camped at an RV park in for a three week stay. I’ve been retired for less than a year. Today is the day of the annual O'Odham Tash Casa Grande Indian Days All Indian Rodeo. We drive up to a run-down arena, park and walk around the grounds, looking at the offerings of Indians – turquoise, silver, belts, necklaces. One vender is selling kettle corn, a lightly sweetened and salted form of popcorn we’ve never seen before. A delightful frying smell comes from a booth selling Indian fry bread, something like our eastern funnel cakes, but more breadlike and substantial and equally greasy and fair-food satisfying. The rodeo begins with young Indian cowgirls barrel racing and then proceeds through the standard rodeo events – calf roping, saddle and bareback bronc riding, and culminating in bull-riding. The venue couldn’t be further removed from my first rodeo experience, but the romance and excitement of a West that existed only for a very few years in the late nineteenth century still creates an irresistible aura.

In Chasing Rodeo W.K. (Kip) Stratton takes on big themes for a book ostensibly about a season spent attending the big rodeos and examining rodeo culture. Stratton examines the history of rodeo, racism, popular culture, and his own search for the absent rodeo bum father he has never met. While asserting at the beginning that 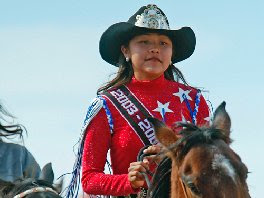 his adoptive father was a true father to him, Stratton’s ceaseless search for flighty “Cowboy Don” dominates this enjoyable and informative book. While Kip Stratton has never met his biological father, he creates an image in his mind of a happy-go-lucky cowboy drifter who lives in a beat up pick-up truck as he cuts a swath through a world of sex, booze, and western lore with a charming smile and a cowboy attitude. Stratton seeks out Cowboy Don as he attends large and small rodeos in the West.

At each stop along the way, Stratton provides a background history for the rodeo he is visiting, placing it in a context of the development of rodeo and its connection to the old west the nineteenth century. He connects rodeo events to the skills of working cowboys while taking notice that many of today’s rodeo performers have never worked on ranches and even questions whether some bull riders have ridden horses. Since bull riding has separated itself from traditional rodeo and now sells itself as an independent sport, this accusation carries 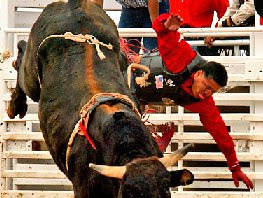 some venom with it.

In his visits to contemporary rodeos at , , CAN, , and finally , Stratton rubs elbows with contemporary rodeo contestants while profiling great performers from the past. One particularly poignant set of entries concern the stories and fates of black or Indian rodeo performers whose skills were among the very best of all-time, but who were forced to perform in a period when racism governed their access to success. Another very interesting strand concerns the backgrounds of his own ancestors, whose journey West mirrors that of many who moved westward to escape failed ambition or sordid experience and take advantage of the West’s openness to creating new lives. More positive is picture of the great rodeo cowboys of the recent past, men like Jim Shoulders and Larry Mahan who should be counted as among America’s finest athletes. Along with providing keen insights into the lives and culture of rodeo cowboys, Stratton drinks and jaws with the fans, cowboy groupies who travel from rodeo to rodeo to rub shoulders, and other parts of their anatomy, with the performers.

Stratton’s odyssey offers an enjoyable romp through an important element of American myth and contemporary cowboy culture while being tempered by his search for a sense of connection with the father he has never met, but whose travels he can either chart or imagine through the locations he visits. For a reader seeking to gain deeper understanding of the range of lifestyles and cultures available in our vast nation, this is an important and interesting book.