Around four in the afternoon cars begin pulling into the parking lot of Wheelwright Auditorium at Coastal Carolina University in People lugging instrument cases amble into the lobby. A group moves upstairs and a jam begins. Mike Morris, the talented banjoist in a loc al bluegrass band called The Morris Brothers is playing with band mate Bob Toppings, a veteran of the Grand Ol’ Opry and numerous national bands, on a resophonic guitar. Other players join in while appreciative listeners cluster about. The acoustics are wonderful, allowing the music to echo through the hall. During the next couple of hours, other bands find places to set up and begin playing. While the quality varies, the satisfaction of making music together in a shared setting never wanes. Even when the concert begins at six, some of the participants prefer to continue playing rather than give up their own immersion in the music to listen to one of the top professional bands.

Below, in the auditorium foyer, volunteers set up. Ticket sales, a raffle of donated items ranging from commercial gift certificates to home baked cakes, snacks sold as a fund raiser by the music education students at the University, and a table where Lou Reid and his band will make themselves available to autograph CDs and just chat with their fans. A booth is set up to give extra attention to a children’s program the Society wants to undertake as well as to publicize RenoFest, a bluegrass festival held in nearby Hartsville, SC, west of Florence in March. Oth 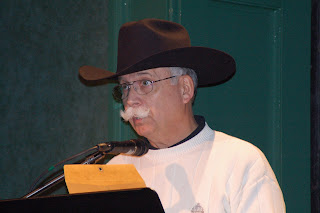 er folks were visiting and chatting. As approached, the crowd, now perhaps 400 people, drifts into the large and very attractive auditorium.

The crowd settles down and welcomes everyone and introduces Doug Clark to introduce Lou Reid and Carolina who sidle on-stage to begin their first set. Many bands come on stage and after a few minutes of setting their sound and tuning launch into an initial high energy instrumental. Reid’s band seems much more casual, as they chat with each other and the audience before beginning. It’s worth the wait, however. Reid’s well-controlled tenor voice and his clear, fast mandolin are a treat worth waiting for. He’s been around the music for many years and has sung with the Original Doyle Lawson and Quicksilver Band as well as joining Seldom Scene after the sad and premature death of John Duffey. He also sings with the superband , where he sings and plays rhythm guitar to 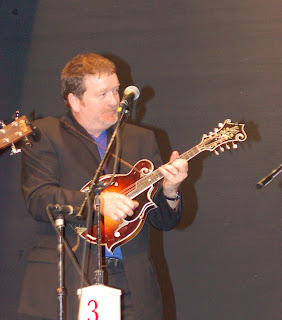 ’s mandolin and J.D. Crowe’s great banjo. I’ve been lucky enough to see him play with all three bands. A remarkable aspect of seeing him this way is that in each band he displays a different persona and plays in different kinds of ways. As the “old man” of his own group, Lou provides energy and drive to each song. His performance also models the kind of generosity often seen in great bands, with each band member getting plenty of opportunity to shine.

Reid is ably supported by his wife, Christy on bass. She brings a saucy sexiness, a clear voice, and a very solid bass beat to this band, while ably inserting her bright personality. Playing banjo in a mando-centric band is often difficult, but Trevor Watson does so quite ably. His solid and unobtrusive backup couples with strong, short breaks and good harmony work in the quartets. Kevin Richardson plays rhythm guitar as well as contributing wonderful flat picking solos. His rendition 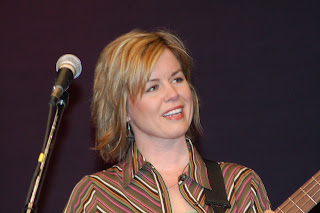 of “Freeborn Man” is one of the highlights of the concert. Finally, Brian Batten on the Dobro adds depth and complexity to this band’s work. As the youngest member of the band, he adds significantly to its performance. The band plays music from Reid’s albums, including his big hit “Time” with depth and feeling. They include a solid mix of traditional bluegrass repertoire as well as newer and more progressive sounds. This band is truly excellent. Reid’s singing, whether on Seldom Scene’s great “Wait a Minute” or his own hit is plaintive and clean. The band’s rendition of “Long Black Veil” allows for heartbreak and morbid humor in the same song.

A regional band called The Hager Mountain Band played a solid cover set in the interval between Reid’s two sets. The audience warmed to this newly formed band and enthusiastically called them back for an encore. Playing a set between Reid’s two sets would be a challenge for any band, and these boys worked hard to meet the standard. 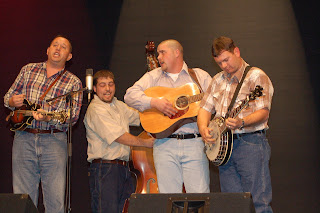 Rivertown Bluegrass Society has raised the bar for itself and met its goal well. The audience was larger than the one they usually draw and they greeted the bands with enthusiasm. The music was wonderful, the jamming fun for both players and listeners, and the evening a success.