We walk up in to a small store front with an unobtrusive yellow banner hanging outside the door. “State of ” it reads. We wa 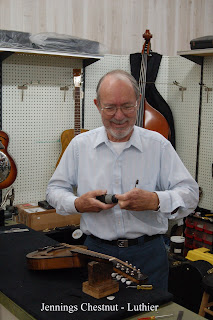 lk in to see helping a very tall, thin black man who wants a left-handed electric guitar. helps him find the exact right instrument to meet his needs, calls the vendor, and orders one. He glances up briefly to greet us as we come in and wander to the back of his shop, carrying our instruments. Coming to the back, he greets and hugs Irene and we shake hands. We’ve come in for him to do his magic to my banjo and Irene’s mandolin. A visit to ’ shop has become, for us and many other acoustic string instrument people, a regular pilgrimage to soak up his lore, his hospitality, and his skill.

We first met several years ago when we casually dropped into his shop. Conway is the county seat of It lies about fourteen miles west of physically, but it feels like a piece of another simpler, more traditional, pleasanter world that many people today seek. welcomed us into the shop with an interested, but somewhat formal reserve. We chatted for a while and bought some gear. I asked him whether he taught banjo, and he said that he didn’t want to give formal lessons, but if I hit a snag, I should call him and he’d help me out. A week or so later I was completely defeated by the “G lick” on the banjo and called for help. I came out with my Deering “Goodtime” open-back banjo and was invited behind the counter for the first time. patiently and gently showed me how to pick the lick and gave me plenty of time to practice. Along the way, he began filling me with bluegrass lore from his long experience as a picker, luthier, and bluegrass promoter. I came home about three hours later after paying him $10.00 for the help.

In the spring of 2005 we attended ’ annual festival Bluegrass on the Waccamaw for the first time. In support of 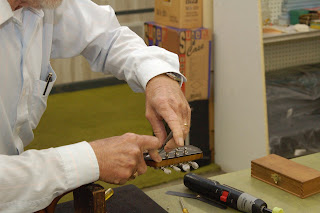 his deep commitment to make bluegrass music available to everyone, his one-day festival is “free to the public.” How manages to bring the best of national bluegrass bands to a small, free festival in each year without charging admission is a mystery to all. Nevertheless, he provides one of the great single day events in this music. A year later, after asking how we could help, we were invited to show up at the Old Peanut Warehouse on Friday afternoon to help with setup. We spent the weekend pulling staples, moving tables and chairs, taking pictures, washing dishes (this is Irene’s specialty), and generally trying to be helpful. By the end of Saturday night, we had been invited back for the 2007 festival. Irene’s work in the kitchen keeping up with the food provided for the performers gets the credit.

sets to work on Irene’s A9 Gibson mandolin. He identifies where the problems are and pulls out his files, hooks, and gauges to nudge her mandolin from good to excellent. As he w 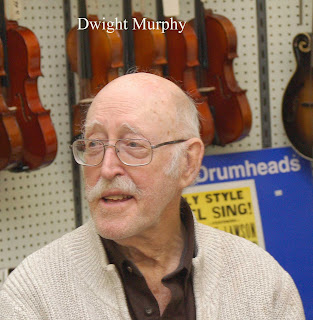 orks, I noodle on my banjo. , lugging a computer in his arms comes in through the front door. Tall and thin with a straggly white moustache, Dwight is an old-time fiddler with roots deep in the same where we spend lots of time. Around eighty years of age, he has finally decided to give up sailing his large sailboat, but he’s written an instructional book filled with old-time fiddle tunes, teaches fiddle to kids in Georgetown, SC, and is building his computer skills with Jennings, who not only builds mandolins, but computers. Dwight pulls one of the fiddles hanging behind him off a hook, tunes it and joins me in playing “Buffalo Gals.” What fun to just sit in a music shop and jam informally with another musician! Neither of us plays great, but the song is recognizable and we’re both having fun. Meanwhile, is putting the finishing touches on Irene’s mandolin. 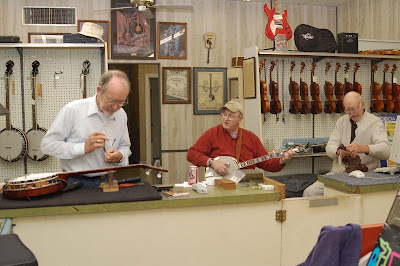 In 1971, ’ son said he wanted to learn to play the mandolin. Money was short in the Chestnut family, so said he’d make one. has now made about seventy-three mandolins with three more under construction now. A new Chestnut sells for $5700 these days. One of his instruments is on display in the at the 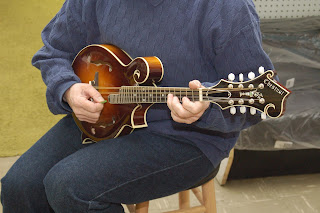 which showcases the work of folk artists. has been recognized by the state legislature as well. A customer would have to come to ’ shop in order to purchase one of these rare instruments, because will only put one in the hands of a musician he feels deserves the instrument. It’s a rare day when a Chestnut comes on the market.

Irene picks up her mandolin and it plays much easier than it did before and sounds better, too. Jennings moves on to my Sullivan Festival, a wonderful, plain instrument that the people at First Quality Music in Louisville have been selling because they believe in making a reasonably priced professional sounding American-made banjo. Their parts have long been key components in Gibson banjos, but their own brand is not well known. Those who do know the brand recognize its excellence. My banjo isn’t flashy, but it 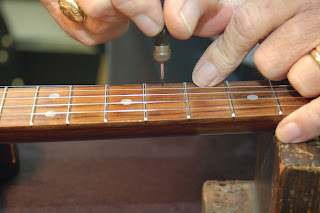 sounds good and plays easily. A woman and her young son come in looking for a Yamaha guitar. gently suggests a couple of suitable beginner guitars in a perfect size for a young boy. They seem uninterested and wander out. resets my bridge, changes my strings, and makes a complex adjustment to the tuner for my fifth string, setting it at a slight angle and making it tighter in its hole. He also resets the rail spikes used for tuning the fifth string when using a capo. The new spikes are perfectly placed and much easier to use. After an hour of ’ ministrations, the banjo sounds better than ever and is much better set up.

Irene and I go to The Lazy River Cafe, a nearby restaurant, to pick up Philly cheese steaks for the four of us. While there we run into ’ daughter Ginger; really is a small town. Miss Willie, ’ wife and business partner comes into the shop as we return, and we visit as we eat lunch. Miss Willie is famous in bluegrass music for the lunch spread she puts out at on the Waccamaw. Most bluegrass festivals, if they offer food to performers, provide a sandwich platter and soft drinks. The backstage buffet at their festival includes barbecue, chicken bog (a low country delicacy worth a blog entry of its own), salads, beans, cakes and other cookies, and a range of non-alcoholic liquid refreshments. Everyone associated with on the Waccamaw goes away satisfied. We leave Chestnut Mandolins after settling our bill for much less than we think the work deserves, knowing we’ve had a treat reserved for few - a day spent with one of the true gentlemen of bluegrass music, an important learning experience, and a few hours of renewed friendship that brings joy to our visit. 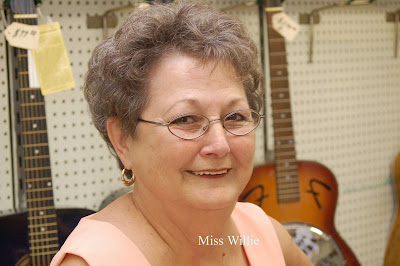