On Learning to Play the Banjo

I think I got my first banjo back in the late fifties or very early sixties from a much loved uncle who owned a Whyte Laydie that he played with some skill when in a creative funk. Uncle Frank was a painter of limpid flowers and wonderful city scapes no-one ever bought. When stuck for inspiration, he played the banjo or the Martin dreadnought that also sat in his studio in . I think it was he who gave me an old open back banjo he had lying around. I also acquired somewhere Pete Seeger’s marvelous instructional record, one of the first of its kind. I learned to tune the banjo to a G chord and tried to follow Pete’s instruction to no avail. I think I only gave it a couple of weeks before putting the banjo aside for the much easier to play folk guitar, which I also stopped playing soon after my wife-to-be became better than I. She sort-of kept with the guitar, but I really didn’t pick up an instrument for forty-some years.

We first attended Merlefest, that quintessential bluegrass festival where 20,000 daily attendees can glory in the widest array of music anywhere, in late April of 2003. There we were introduced to traditional and progressive bluegrass groups the likes of which we had never encountered before. We wandered around the campus of in , NC, visiting vendors, sampling the twelve sound stages, and meeting new friends we would cross paths with again. We also heard Earl Scruggs, Jens Kruger, Bela Fleck, Rob McCoury, Scott Vestal, Jim Mills, and other great banjo players. I was hooked. A year later I bought my first banjo, a Deering Goodtime open back and Janet Davis’ “You Can Teach Yourself Banjo” book. At the same time, Irene bought a starter mandolin. We were nearly 63 years old.

The banjo is a strange mistress at best, but to start courting her at an advanced age makes mastering her even more elusive than the lifetime that many other players devote to her. I brought my new Goodtime home and started to read the book and practice the skills, slowly and laboriously picking away. My fingers hurt, I didn’t understand the picks, and everything was just so slow. Nothing I played sounded anything like what a banjo was supposed to sound like. I played alone in a practice room and occasionally pulled the banjo out to show 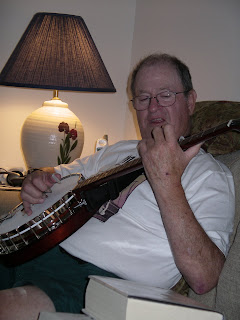 our friends what I was doing. They were always polite and encouraging. Apparently they had no idea what a banjo was supposed to sound like or how a banjo ought to sound. I played “Boil ‘em Cabbage Down” and “Good Night Ladies” along with repetitions of the banjo rolls, and there was very little progress.

The rolls. To develop his hard driving style of bluegrass banjo, Earl Scruggs had fallen into a series of right hand fingering patterns that Bill Keith dubbed rolls when he worked with Earl to turn out what is still reckoned to be one of the best instructional books on the banjo. Earl says to practice each roll a thousand times and then a thousand times more. He says to go for tone and accuracy and promises that speed will follow. Some promise! Rolls, chords, hammer-ons, pull-offs, slides, and pinches – the basic stuff of playing the banjo. Breaks and back-up – the banjo is part of an intricate musical dance including at least three other instruments and a tight mixture of two or three voices. Lots of banjo players don’t sing, because playing the banjo takes so much concentration that drooling jokes are a piece of banjo lore.

How can you tell if the stage is level?
Because the banjo player is drooling from both sides of his mouth!

There have been two major turning points in my learning path. At Merlefest 2005, we heard the winner of the annual banjo contest play. His name was and he was introduced as coming from , just around the corner. I called Bruce to ask if he taught and how much he charged. He did and he said, “Twenty-five dollars a lesson.” And I was signed up.

Bruce is a small, wiry balding man in his early fifties whose entire life appears to have been devoted to making music and whose passion has been the banjo since he was quite young. While for many years he subsisted by playing rock guitar, he now is fully engaged in the banjo. At my first lesson, I brough 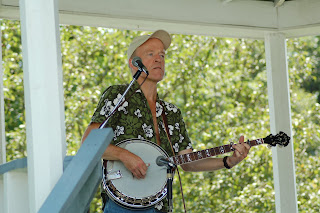 t along the material I had been studying for the past year or so. I particularly had been working with Trischka’s “Essential Practice Exercises for the Banjo.” Bruce took one look at these materials and sniffed, “Earl Scruggs never put his index finger there,” thus establishing the parameters and the nature of our relationship. I was to learn to pick in Scruggs style in order to achieve a level of mastery that would allow me to branch out into other ways to approach the banjo. As I’ve moved along, it has become increasingly clear to me that, in most ways, this was a good way to go. I bought a copy of Bruce’s book and CD and tried to schedule lessons often enough so I would have goals for the next lesson. I also discovered that a lesson with Bruce means putting aside about two to two and a half hours for work with him. As the time drew to a close at my first lesson, I pulled out fifty dollars to pay for my two plus hours. “Oh, no,” says Bruce, “I said $25.00 a lesson.” Wow!

Over the last eighteen months I’ve developed a pretty solid grasp of the rolls, am beginning to understand the way that chord forms related to the fret board to permit work up and down the neck, and practiced a series of songs, each of which is arranged to allow practicing a particular roll and then later a series of inter-related linked rolls. Bruce has emphasized listening and learning by ear as well as working on playing backup to both singing and instrumentals along with learning banjo solos. Recently, I’ve begun to try developing my own breaks for songs and Bruce has helped me take my rudimentary efforts and make them into real breaks by altering the rolls to fit the melody, adding pinches, slides, hammer-ons and pull-offs, i.e. turning them into real banjo playing. Each time I finish a lesson, I have plenty to work on until the next time we meet. Finally, the real pleasure of working with Bruce has been his patience in helping me to develop as a player in a direction that makes sense.

The other major turning point came when I signed up to attend Pete Wernick’s Jam Camp, this one held during the three days preceding Merlefest 2005. I had seen Pete’s Jam Camp students performing from the Cabin stage on Thursday at Merlefest for three years. This ye 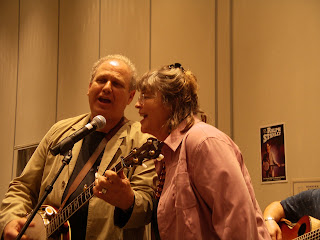 ar I decided that I should attend and try to learn to jam from Dr. Banjo. Pete has actually earned this title, as he has an earned Ph.D. in sociology, but beyond the degree, his work has proven itself to be good medicine for a generation of banjo students, bands, and wannabe jammers. His writings about teaching and learning banjo make important contributions to the literature of the instrument.

Prior to attending Jam Camp, most of my experience had taken place in my practice room without the pressures of having to pick in front of others or having to work in the cooperative setting of a band. Within an hour on Monday morning, Pete had managed to push me way beyond my level of comfort without making me feel out of place or so challenged I couldn’t learn. Within a few hours we were divided into jam groups and began working on songs based on the skills we had worked on in large groups under Pete’s direction. Every time it came my turn to play, I totally melted, unable to perform anything approximating a song. Pete’s instructional strategies included direct instruction, large group practice, his recounting entertaining stories about the history of bluegrass that had direct relevance to what we were learning, small group practice, and directed practice from him and his staff, which included his wife Joan. The range of ability in the room ranged from absolute beginner, through moderately experienced, to a few near professionals. The better and more experienced campers assisted the staff in providing leadership and help.

Pete’s model works well from both the standpoint of social relationships and increasing individuals’ ability to develop themselves as musicians and part of a musical team, read band. By working with the campers on playing the lead, backup, singing, and harmony, Pete raised our ability levels and our confidence. His focus on ear training and de-emphasis on learning from tab required many of us to alter our learning focus. Much of what he taught was quite difficult for some of us, but the emphasis was on success and students provided lots of support for each other. Students’ level of confidence rose as the three and a half days passed, and by Thursday we were ready to present a song to the rest of the group. Later in the day, we repaired to the main performance area of Merlefest, where we sang a couple of songs for the several hundred early arrivals at the festival. Our first public performance had been at the largest festival of them all! Throughout the rest of the weekend, we kept running into people who had become our friends. As the summe 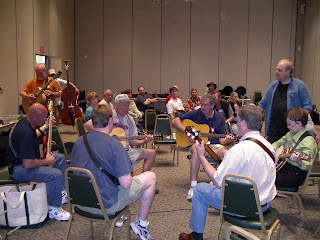 r wore on, we ran into people we had met at Jam Camp at other festivals, and one of our campers hosted a banjo workshop in his home in in September.

As a result of band camp, I have begun designing my own breaks based on singing the song, hearing it in my head, finding the tune on the strings, and turning them into a break, of sorts. With ’s help, I have begun to blend in slides, hammer-ons, and pull-offs to make my playing sound more like banjo picking. I’ve participated in a couple of jams with greater confidence and learned to enjoy watching good bluegrass even more. I developed a greater respect for the early pioneers as well as the later innovators. And I found myself to be more a member of the bluegrass community. I probably won’t ever become a really good picker, but I can find even more enjoyment in what and how I’m learning.

I know I’m never going to be a really good, perhaps not an even competent banjo player. But I have goals for improvement and each day I have many elements to focus my practice on. Being involved in lifelong learning on an instrument that only a half dozen people in the world have truly mastered has to be a pretty good quest and helps to give meaning to anyone’s life.