Bluegrass at the Bean Depot

The Bean Depot is a low, wooden building, erected in 1922, that has served as a post office and general store since before development destroyed much of . Th 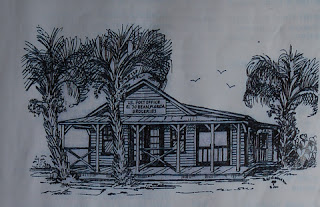 is low rambling wooden building is, in its current reincarnation, an old-time bar offering live music on most nights. Wednesday is bluegrass evening. With our two longtime friends, Steve and Dianne Powel, we arrive early and pick a banquette table in the far corner of the narrow room. In the Bean, “Banquette” means a padded corner seat with a 1940s style enamel kitchen table. In the Bean, no two tables are identical and there are a variety of kinds and shapes of chairs, too. Our waiter, Stan, is pleasant and accommodating. The menu includes a bar standard variety of burgers, chili, and soup as well as dinner entrees including shrimp, scallops, and fish as well as chicken and various salads. Dianne has bean soup, appropriate, which she says is delicious. Irene and Steve have pretty standard burgers. My 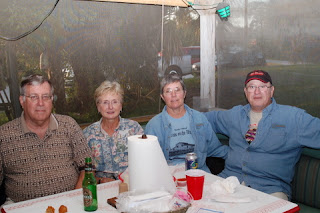 blackened fish on a bed of salad is tasty. Seasoned well while not overcooked, but plenty spicy. Around the band straggles in and begins to play.

I’ve been told that tonight will be a jam night. The initial band includes two mandolins, a guitar, a banjo, and a woman on doghouse bass. They are un-miked and the crowd is pretty raucous. Outside someone’s car horn starts going off and the driver, aided by two or three friends, can’t seem to stop it. The room is full of diners and drinkers who listen with one ear while they talk and laugh. The band plays and sings a group of bluegrass standards and seems to be enjoying itself. In a back room, called the “Museum,” another eight or ten jammers straggle in and begin 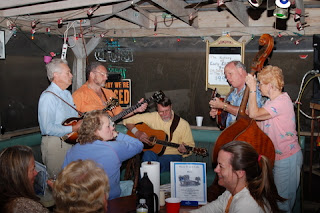 playing. Some players rotate into the house band while others move back to the jam group in the Museum. Some people move chairs from the main room to the museum, and everyone is having a good time.

The music has been, at best, adequate bluegrass, but that really doesn’t matter. The crowd has enjoyed itself and given The Bean a good Wednesday evening. More important, a dozen or so bluegrass musicians have had an opportunity to perform before a a live audience. It is in locations like this that bluegrass finds one of its bases. All over the country, bars and small restaurants, even McDonalds, make space available for groups of bluegrassers to make music together and to provide entertainment for others, many of whom have not been exposed to the music before.

Around we get up and leave to drive home. We’ve had a nice pub dinner and enjoyed each other’s company while listening to music. A lot of bluegrass musicians have had a chance to jam with a real, live audience, it’s February21st and the temperature is nearly 70, and all have had a good time. 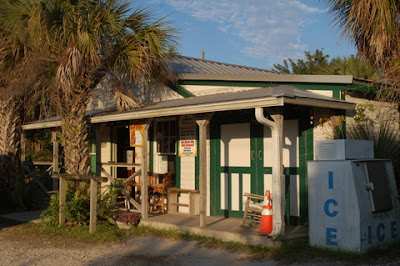 The Bean Depot is located of SR 776 at the El Jobean Bridge, corner of Garden and Sturkie, across from the Mystic Station in El Jobean, Fl, between and . Their phone number is: 941-627-3344 and their e-mail address beandepotcafe@comcast.net . They play bluegrass music on Wednesday evenings beginning around with other music on other evenings.