The Education of a Coach by David Halberstam

In his Acknowledgements, David Halberstam makes two elements of this useful book perfectly clear: Halberstam is not knowledgeable about football even though sports has been an imp

ortant element of his long and distinguished writing career and this is not a football book as much as it is meditation on success in . Placing Education of a Coach in this context turns it from a somewhat interesting football book into a fascinating study of a complex and interesting man.

Bill Belichick has won three Super Bowls during the first decade of the twenty-first century as coach of the New England Patriots. His has become recognized by fans as perhaps the finest football mind in the game today. His teams are characterized by great defense based on taking away the strengths of the opponent and on the intelligence and skill of Tom Brady, along with Peyton Manning the preeminent quarterback of the decade. The book is at its weakest, however, when seeking to describe players and the feel of the game in progress. Halberstam often needs to explain football terms like “blitz” or “play action pass” as if he is assuring himself he understands elements of the game familiar to even casual TV fans of football.

The strengths of this really quite interesting book lie in the descriptions of the rise of the Belichick family from the poverty of immigrant life in the early part of the twentieth century. By dint of an exceptionally powerful work ethic, dedication, and sacrifice, it became possible for Bill Belichick’s father, Steve, to attend college and rise to prominence, at least among the knowledgeable, in the coaching profession. He spent a large part of a successful coaching career as an assistant coach at the . The son, abetted by his father’s connections, was able to parlay limited athletic ability but finely honed intelligence, extremely hard work, and a creative and innovative approach to the game into a post graduate year at Andover, a scholarship to Wesleyan University in Connecticut, and a slow but steady rise through the coaching ranks in the NFL into a remarkable career as a winning head coach.

In terms of providing insights into the inner workings of a football organization, I prefer John Feinstein’s Next Man Up, an account, reviewed earlier on this blog, of a year in the life of Coach Steve Bellichick of the Baltimore Ravens. On the other hand, The Education of a Coach develops

a remarkable picture of the learning processes and skills necessary to succeed in this demanding profession. Attention to detail, close observation, a huge appetite for thoughtful repetition, and a willingness to spend endless hours analyzing film are necessary, but not sufficient, components. A great coach must also win the respect of players who usually grant such respect only to those who have excelled as players themselves. It requires a person who can identify the strengths he needs and develop the players to fill those needs. It demands the ability to identify and develop assistants who can fulfill parts of the job while working within the confines of the coach’s vision. All this must be accomplished with the context of working for a rich and often spoiled owner, satisfying insatiable press and fans, and knowing that each success demands more of the same. The great coach is an unusual person who might, under other circumstances, become CEO of a major corporation or run the country. In Bill Belichick’s case it has meant an unending involvement in creating or helping to create great football teams.

In the last portions of the book, Halberstam seems to lose interest, but the title gives it away. This is a book about the process of becoming a great coach, not the results of that process. Therefore, the most interesting parts of the book concern how Belichick gets to the top of his profession, and laterally how he develops the staff he needs to support his efforts and how those staff members spread across the country as coaches for other teams, bringing Belichick’s skills and training to many other college and professional football teams. 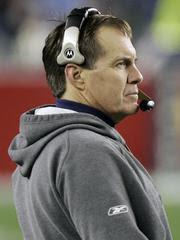 One of Halberstam’s best books, The Best and the Brightest, details how the Ivy League trained group of men surrounding John F. Kennedy came to provide leadership for the country. In a sense The Education of a Coach tells the same story about a more humble group of men dedicated to seeing that a game is played at its highest possible levels. Halberstam sometimes seems a bit bemused by the fact that so many able and thoughtful people have committed themselves to football. This attitude somewhat mars a truly interesting and insightful look into the ranks of coaching which have been hurt at lower levels by an inadequate understanding of the bullying approach made popular by Vince Lombardi. Perhaps if the men coaching boy’s sports had a better understanding of the thought and study expended by men like Bill Belichick, our sports would develop happier kids and more effective use of sports as a metaphor for life.

Picture of Steve Bilichick courtesy of Laura London at http://www.allthingsbillbelichick.com/
Posted by Ted Lehmann at 9:06 AM