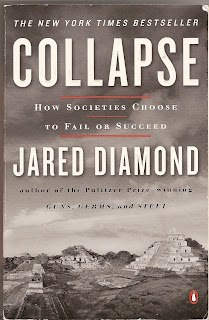 acilitated the rapid development of societies in certain parts of the planet. He describes how people living in temperate climates with certain grasses, indigenous domestic table animals, and ease of contacts with other people were able to develop more quickly than peoples living isolated lives in harsh environments. Along the way he demonstrates how the differences between peoples are more differences of circumstance than ability

In Collapse he takes the opposite end of the development spectrum and demonstrates convincingly how societies, through a series of choices they make fall and disappear.

Early in his book, Diamond lists environmental and social factors:

Diamond applies these five factors to ancient and modern communities and whole civilizations that either survived because of their ability to respond to their situation or collapsed because the combination of negative factors became too much for the society to continue and it died gradually or collapses precipitously and completely.

Diamond examines past civilizations in small and isolated settings where he can focus on particular elements from his factors. He uses such past societies as , Pitcairn and , the Anasazi, the Greenland Norse and the Maya as past societies that collapsed due to a combination of the factors listed. He then applies the same criteria to modern societies like , the and , , and to show how the same factors continue to operate in the modern world. Finally, the last three chapters examine what the practical lessons of these studies are and suggests ways we, as a world, can adjust to the way we have been mining our available resources and lives to make it possible for us to continue to develop as human beings on our planet. He suggests that our collapse is not inevitable, but changing our future will demand thoughtful adjustments and facing the reality of our existence.Jared Diamond is a big thinker. His specialty is the rise and fall of whole civilizations, of societies. As I read his opening chapter on , I began to see how the five principles of societal collapse he has enunciated apply to places we know and have visited in our life and travels. Towns or regions like the , , , and others exhibit the same factors in operation as his locales. My understanding quickly went from saying that he had hit upon a coincidence to realizing he had developed a deep understanding of how things work.

Often increasing population ­> increased food production > deforestation > erosion > competition for scarce resources > fighting > social decline > collapse. While this pattern isn’t exactly followed in each social collapse, it represents a general pattern that Diamond observes in the collapse of past societies as well as in progress in contemporary ones. He points out that “…the values to which people cling most stubbornly under inappropriate conditions are those values that were previously the source of their greatest triumphs over adversity.” (275) For instance, the insistence of the Greenland Norse in continuing to farm the sparse land on which they had settled in order to be able to eat beef and grow wool denuded the land. Instead of learning from their neighbors the Inuit, the Greenland Norse maintained their self image as Europeans and Christians through the 500 years of their existence in . As a result, their ability to clothe and feed themselves gradually declined until they died away, leaving only ruins. Had they been willing to learn from the Inuit and adjust to a fishing and hunting environment that made greater use of the sea, they might have survived.

While Diamond emphasizes deforestation, erosion, and decline of arable land combined to create the conditions leading to population decline, often accomplished through genocidal behavior, he says people resist these explanations because they confuse explanations of behavior with excuses for that behavior. Often, as in the case of , the Hutu vs. Tutsi murders were the proximate cause for a large condition needing rectification, the overpopulation of a landscape not able to support the population growing there. He argues that alternative scenarios such as birth control, reforestation, alternative fuels, and a multitude of other approaches can eliminate social decline if people are willing to change their behavior. He suggests that clinging to ideas like the primacy of private property or the imminent coming of the savior eliminating the need to conserve make it difficult to make the necessary changes. He contrasts this with the willingness to reduce the forces of national pride and boundary that developed into the European Community.

Diamond’s book is long and might seem tedious to many, but his insistence on providing numerous examples of the application of his principles makes his arguments carry increasing weight as the book continues. In his chapters about the oil, logging, and hard rock mining industries, Diamond takes a position showing that the stereotype of both the environmental activists and the pro-business absolutists are in error. He focuses on the environmental record of Chevron Oil to show how enlightened environmental practices can increase corporate profitability. I found myself becoming angry at our current administration as Diamond shows how subtle and insidious the dangers are and how difficult the solutions. He also says that one of the best ways to encourage people to change is to provide good models of appropriate behavior. This means that the cannot continue to consume without limit while expecting those in less developed countries to reduce their demands for more comforts and better food.

The lessons from Diamond’s book take a good deal of thought and some perseverance to internalize. While Collapse does not present an entirely pessimistic view, it challenges us to change and adapt, an argument we (as consumers, a nation, a race} ignore at our peril.