Carl Hiaasen brings a mordant sense of humor, an eye for the telling detail, and an ea 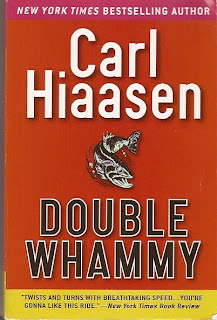 r for language to the southern mystery novel. Double Whammy is concerned with the apparent murder of Bobby Clinch, whose bass boat has flipped over on . Bobby is found a day later, floating face down in the lake, his hair pecked off by ducks seeking nesting material. A sample of Hiaasen’s world:

“I heard you got divorced.”

“That’s a shame, R.J. She seemed like a terrific kid.”

“The problem was money,” Decker said. “He had some, I didn’t.” His wife had run off with a time-share-salesman-turned chiropractor. Life didn’t get any meaner.

Peopled with an odd assortment of indigenous characters, each of whom adds a special flavor to the mix, Double Whammy starts off with a bang and keeps on moving. The world of bass tournament fishing, known to most of us through moments spent surfing the cable on Sunday mornings looking for an alternative to fundamentalist sermons, comes to oddball life. The book is filled with surprising plot twists and interesting local color, red neck characters who Hiaasen paints with a mixture of affection and disdain. He has an eye for the grotesque and the absurd. His protagonist, a .former fashion and newspaper photographer named R.J. Decker, who has done time for assault as a result of his temper, now works as a private investigator specializing in photos of errant husbands and stolen vehicles. He has an ex-wife whom he still loves, a lousy life he hates, and is recruited to investigate a cheating bass champion. Decker’s investigation leads him into a world of evangelical preachers, a governor of who failed because of his honesty, some cops, and some criminals too funny to be very scary. All of this leads the reader on with each new plot twist complicating an already complex maze. Hiaasen’s anger at the destruction of old is made palatable by his effective use of humor.

Hiaasen is a graduate of the and was a reporter for the Miami Herald before becoming a regular columnist. He published his first novel, Tourist Season, in 1986. Since then he has published nineteen books, including a couple of children’s books and collections of his columns. He has been published in thirty languages and won numerous awards.

Double Whammy is one of Hiaasen’s early novels, published in 1987. Despite some technological references which now seem anachronistic, the book is still not too great a stretch in the public policy realm of the twenty-first century. I look forward to reading more of these books.