The music Bill Monroe developed in the forties and which came to be called bluegrass after his band The Bluegrass Boys emerged from its roots in gospel, mountain music, popular music of the day, jazz, and the beginnings of rock to become a show music played by acoustic bands on stages. It is fast, tight, intricate, and addictive to those who come to know and love it, but it many ways it has become so constructed as to lose touch with its roots. The Woodbine Opry returns bluegrass lovers to the very roots of the music.

is in the southeast part of the state a few miles west of Interstate 95 and a million miles away from the coastal resorts of Jekyll and St. Simon’s . Abo

ut ten years ago, the old high school in Woodbine was replaced and members of the community decided to save it. The Woodbine Opry developed as a way to raise the money to save the old building and rally community spirit. Seven years ago they began a bluegrass and gospel evening on Friday and a year later they added a Country and Western music evening on Saturday. The music is performed from the stage of the old auditorium, which seats just short of 300 people, and begins at sharp.

Before the music begins, the ladies of the town provide a pot luck supper. It’s pot luck because no one knows before they get there what’s going to be served since the food is prepared at home and brought to the school to serve a southern style home cooked buffet. We arrived at and found a line of Red Hats ahead of us in line and the rest of the line rapidly forming behind us. For $7.00 we bought our tickets and proceeded to wend our way through the line. Greens, beans and ham, corn and grits, tomatoes and okra, spaghetti, fried chicken, kielbasa, lots of casseroles in slow cookers, macaroni salad, potato salad, slaw, corn bread and biscuits, peach cobbler, banana pudding, marshmallow delight – what you’d expect at a family reunion in the south. We join a couple we had met from and a woman from and enjoy their company over a leisurely supper.

Folks start to move into the auditorium where seat cushions were stacked in piles at the back, and the music began. Obviously there is a group of regulars on the stage – mandolin, lots of guitars, a couple of resonator guitars, one banjo, some fiddles – up to twenty musicians on stage 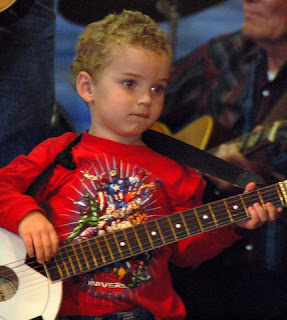 at once. It is quite obvious that anyone with an instrument, including voice, is welcome to join the group on stage and perform. Soloists make their way to the mike, call a song, and kick it off with everyone else joining in. Tempos are reasonable to enable less able pickers to feel comfortable. One fiddler, a handsome woman from , stands out with her “Red Wing” performance. Some of the performers start their bits off with good old corny jokes. The quality of the music isn’t what the Woodbine Opry is about, it’s the character of the people and the enjoyment they generate for themselves and the crowd that comes to see and hear them. They offer good old bluegrass and country songs with enthusiasm and vigor. From time to time during the evening, a group of women would prance down the aisle in outrageous costumes, drawing men from the audience to dance and clown with. Ranging in age from little Zachary, a three year old guitar player, to men and women well into their seventies, they represent the best of what people think of when they recall country folk and ways. 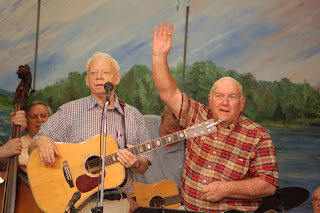 The audience is a mixed bag. There are more local people on the stage than in the audience. Two groups, a church group and the Red Hat ladies, create a larger than ordinary crowd. A large contingent from stands out because of their dress and accents. When the M.C. asks where people come from, shouts of , , , , , and more came from the audience. One guest had brought his bagpipe and played Amazing Grace as part of the final song before intermission at . People stayed in their seats for fund-raising raffle drawings for cakes, hats, and t-shirts as well as a surprisingly large 50/50 drawing. We head back to our camper at the intermission after a happy evening, agreeing to try to meet our new friends the next day. 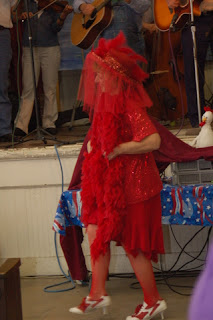 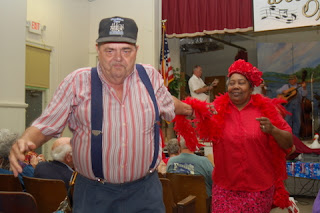 Information about the Woodbine Opry can be found at www.woodbineopry.com . People planning to attend should arrive in plenty of time to finish dinner before heading into the auditorium for a fine time. 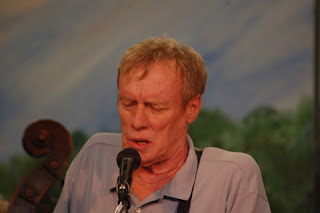 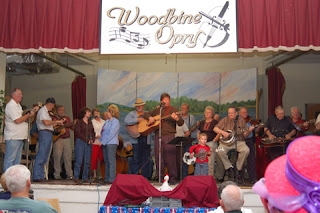