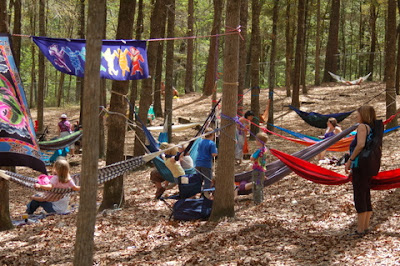 Take a campground unprepared for the five or six thousand people claimed to be here and combine it with a festival promoter more interested in everyone having a “good time” than in seeking to maintain the standards proclaimed in their written materials and you have a recipe for disaster. That Springfest hasn’t turned into a complete meltdown is a testimony to the general good nature of the majority of people here. It doesn’t take too many peopl

e not cooperating with the rules to turn what could be a good experience for everyone into a difficult or impossible situation.

The festival booklet has a page of “A Few Simple Rules and Reminders.” For instance, smokers are supposed to stay behind the sound booth, leaving a large smoke-free area. We noticed right away that “behind the sound booth” doesn’t include backstage. Thus, smoke constantly drifted into the audience from where the staff and performers congregate. But even absent this smoke, there seems to be no effort to keep smokers from standing or sitting wherever they wish. Not once did we even hear a request from the stage to observe the standards the festival espouses.

While there are lots of “security” people checking wristbands, it seems that once through the gate into the area, anything goes. Prohibitions against amplifies music, drumming outside the designated drum area, and legal age restrictions for use of alcohol are publicly flaunted. The aroma of marijuana is evident. The restriction against coolers and cans and bottles in the performance areas is well-policed, because the campground has maintained the very lucrative beer concession. The exhortation “Please treat everyone as you would like to be treated” should actually read something like “Please let me alone to do what I want, no matter how much it disturbs others.”

In many ways, campground employees try to satisfy the problems that arise. While we were at the office doing our computer chores, several people came in complaining that their camp site was being squatted on by someone else. Efforts were made to accommodate these people even though moving people out of hi-jacked camping space, even those paid for by others, was no longer possible. It’s probably worth saying that the foregoing comments are not a disgruntled rant from a couple of old fogies. We attend lots of festivals and music events. While we prefer bluegrass, in both its traditional and progressive forms, we’ve been to rock and country concerts as well as other events. The pre-concert tailgating and in-concert behavior at a Bruce Springsteen concert in was better controlled and more fun than most of what happens here.

All this having been said, the festival should be about the music, so let’s look at it. For the most part, the music we heard pounding up the hill to our trailer had a kind of monotonous, d

reamy, drifty quality devoid or melody or passion – surprising to me. On the other hand, the bands we chose to see were really good. Scythian is a Celtic group fronted by a buff fiddler whose athletic appearance and defiant postures represent his playing well. The band offered a range of Irish and Scottish songs with a rock edge to them that works well.

The Pinkham Family Big Band with Josh Pinkham was terrific. Pinkham is one of the crop of

great young emerging mandolin players that promise to keep acoustic music alive. Josh has only been playing mandolin for about four years, but has been recognized as a prodigy. He began his music as a drummer and has expanded. Since then his playing has only become better and his range has continued to widen. Singer Terry Pinkham, Josh’s mother but looking like his somewhat older sister, is a fine jazz/pop singer. Father Jeff Pinkham, by his own account, is a mandolin player who has played with the best but 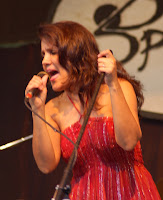 now plays rhythm guitar for his prodigy son. They were backed by a first rate drummer Kenny Suarez and bass player Manny Yannis, cousins from the Miami Cuban community. Jeff’s composing showed itself in Siren’s Lullaby, catching the longing sound of the siren’s song that haunts the listener ever after and a samba they also played. The band’s range showed in covers as diverse as Billy Holiday, Prince, and Bill Monroe.

I used to denigrate the mandolin as putting out too little sound and having no sustain, leading to a choppy unmelodic impression. How wrong I was. In the hands of a master, the mandolin is versatile, rich in resonance and nimble. It fits into a wide variety of music from bluegrass through rock to classical Italian songs. Josh Pinkham, at sixteen, is already a master. Players like , Adam Steffey, Sam Bush, Chris Thile and many others each have a unique and recogni

zable sound that demonstrates the range and capacity of this marvelous instrument....

The Biscuit Burners were an old-timey bluegrass band that used to get a good deal of play on XM channel 14, Bluegrass Junction, which serves up a pretty conservative view of the genre. They have moved, at least for Springfest, toward a much more world music oriented sound. Their Dobro player spent part of last year in studying a 22 string lap instr

ument that plays like a Dobro and sound other-worldly. A song, Annie Oakley, was particularly effective. Josh Pinkham joined The Biscuit Burners for a song that rocked. The band has recently added Odessa Jorgenson, who is both decorative and talented, on fiddle. This creative band is pleasant to listen to. It features lots of instrumentals that really are its best feature.

arrell Scott is one of the great singer song writers. His lyrics tell of mis-spent childhood, the despair of addiction, and lost love. For his performance at Springfest, he added Joe Craven, an inspired musician who only adds quality and taste to whatever group he joins. Scott sang some of his great songs like “River Take Me,” “It’s Whiskey That Eases the Pain.” Scott’s voice bottoms out on the word pain sending the pain right into people’s guts. He sang “Helen of Troy Pennsylvania” which is a wonderful song about two teena

gers’ first sexual experience with the lovely and generous local divorcee. A song we own but have not paid attention to called “The Indian Side of Chicago” tells of the difficu

lty of growing up poor in a big city. Scott’s deep, throaty voice adds an extra instrument to his group the compliments his own fine playing on both electric and acoustic guitar. Scott lays it all out on every song. His band, including Gary Ogan on drums and a fine bass player worked well together to present Darrell's great songs and voice.

Joe Craven, who also appeared on Saturday with his own group, is a natural wonder. He pla

ys mandolin and fiddle very well, but is most interesting when he takes on the role of percussionist. He plays any instrument that can make a sound and uses mouth sounds to supplement them. More about Craven on Saturday. Craven and Scott had never played a set together before, but no listener could tell that this group was anything other than superbly rehearsed and practiced together.

The rest of the evening held little interest to us, so we went up the trailer to watch the NCAA games. A group parked next to us had set up a satellite dish with a large screen television set on the tailgate of a pickup to watch the Gators play. A cheer arose after each good play and the gators won. This good hearte 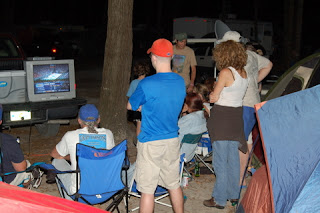 d group put a positive punctuation on the day, as we drifted off to sleep.