I once asked Chris Crutcher, a highly regarded writer of what’s called Young Adult (Y) fiction what made YA fiction YA fiction. He said, only half joking, that it was YA fiction if it was under 250 pages long. By this criterion, Raising Kane qualifies. By any other criteria, it’s just a good book. Raising Kane by Brent Davis is a good read for any kid from about fourth grade up as a novel, and works well for adults as a quickly read novella. 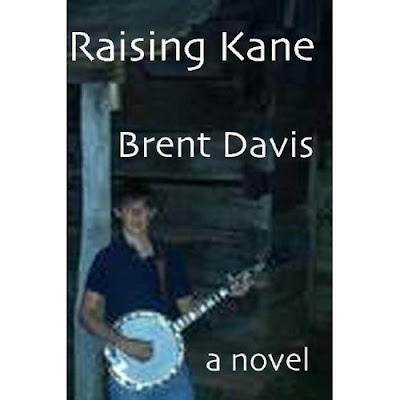 Eddie Kane is a shy twelve year old whose father is a World War II veteran and whose mother is a Mom. Set in Alabama in the mid-1950’s, the book tells the story of Eddie’s joining his uncles’ touring bluegrass band for a summer. It’s clear to those around him that Eddie has “music in him.” At twelve, he’s already an accomplished picker, even though he’s loath to pick in public. He wants to spend the summer playing baseball, but knowing the family needs the money he can earn on the road and wishing to escape the chores of working on the farm, he agrees to pick up his banjo and join his uncles.

In the course of the book, Eddie rides in the touring car of his uncles, the Bragger Brothers, as well as fiddler Murray, a young Jewish man who has come to bluegrass through a then typical route, the folk scene in New York City. Riding through the South of the beginnings of the civil rights movement, Eddie is on hand to see a race riot in the city of Montgomery, to see the effects of racial segregation in several different encounters, and to have his experience interpreted through the eyes of his new friend Murray and one of his uncles, a no nonsense racist. Eddie grows to a new understanding of himself and his world while emerging as a musician and a person.

The story unfolds through Brent Davis’ excellent story telling. A bluegrass musician himself, Davis captures the feel and environment of life on the road for bluegrass musicians in the 1950’s, before festivals. In this time period, the great first generation performers like Bill Monroe and Flatt & Scruggs traveled incessantly from town to town, giving performances in tent shows, used car lots, road houses, and American Legion halls. They recorded weekly fifteen minute radio shows at tiny stations throughout the south. If they were successful and lucky, they appeared on the Grand Ol’ Opry and had nearly nationwide listenership. It was a difficult, itinerant life; few survived on the road for very long. Today, most that remains of these early days are a few scratchy recordings and some faded photographs. Brent Davis brings this world to life in a way history books and photo essays only suggest.

Raising Kane by Brent Davis is published by Livingstone Press (University of West Alabama Press) and available from major on-line sources.
Posted by Ted Lehmann at 9:12 AM