The Hometown Opry is carried live on WKBC Radio, 880 AM, every Friday morning from 7:00 until 9:00 at Minton's Music & Pawn in North Wilkesboro, NC. On any given Friday morning visitors might hear a local bluegrass band, the drop thumbpickers, or a music celebrity on his or her way through town. I understand Rhonda Vincent once dropped in for a performance. This morning, the release party for Tut Taylor's new CD called "OOzin' yhr Blues" was scheduled. Despite the fact that Tut is ill and in the hospital, the band showed up with Donnie Swaim filling in on Dobro. There is, of course, no substitute for Tut. When we visited him in the hospital on Wednesday, he was optimistic he would be released the next day and be able to perform on Friday. Sadly, it was not to be. The performance this morning was dedicated to Tut and his lovely wife Lee with the hope and prayer he would soon be coming along.
Tut Taylor Playing the Tutbro 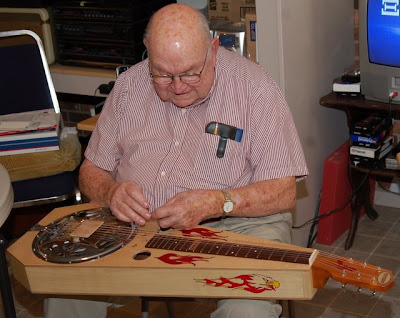 We arrived at Minton's around 6:45 AM and were by no means the first people there. Over the next fifteen or twenty minutes enough people showed up to fill the 50 or so seats provided. The band took the stage and were introduced by radio host Steve Handy as they came on the air after the news at 7:00. The walls of the performance area at Minton's are hung with all sorts of instruments as well posters and signed pictures from the dozens of well-known musicians who have been through the store. Minton's is, indeed, one of those fabled music destinations all lovers of acoustic music should visit as a sort of pilgrimage. Beyond that, they deal in excellent instruments at good prices. 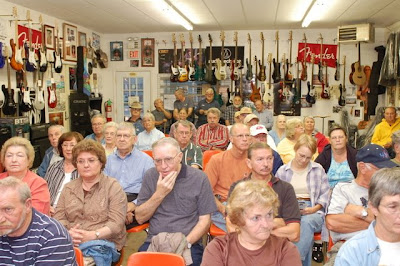 The band, containing members of the recording band who had made "OOzin' the Blues" performed from the stage, singing and playing songs from the new CD produced by Tut Taylor. From the recording band, Lorrie Barker sang and Steve Barker played lovely blues/jazz guitar. Dwight Burks played mandolin and fiddle as well as doing some singing. Donnie Swaim filled in for Tut more than capably on Dobro while his wife Lynn provided the solid bass on the doghouse. Songs like Honey Babe Blues, Wayfaring Stranger, Columbus Stockade Blues, and Sittin' Alone in the Moonlight were played with a bluesy tone in solid interpretations by Lorrie Barker, a very fine singer. Tut had said the other day that the music was different, and it is. And it's very good. "Oozin the Blues" can be ordered for $15.00 directly from:
Tut Lee Records
808 Old 60
N. Wilkesboro, NC28659
There may be a shipping and handling charge.
The Barker & Taylor Band 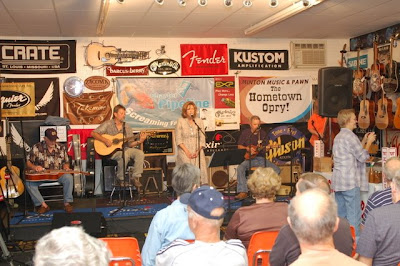 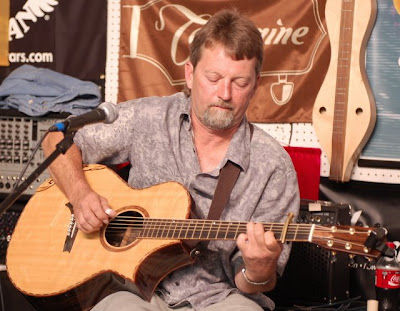 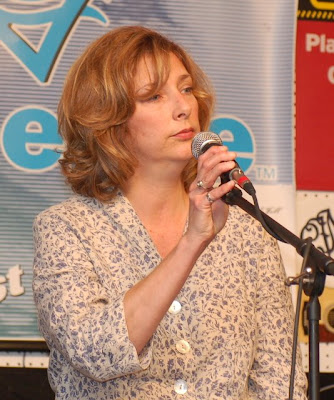 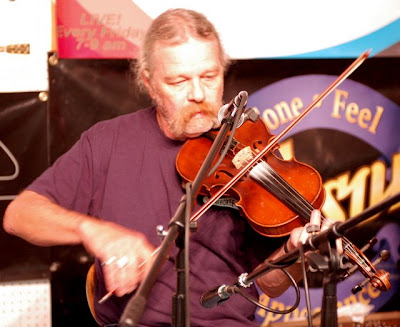 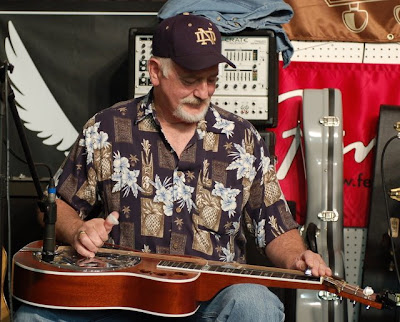 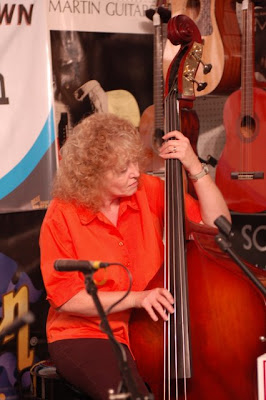 In addition to the roll-out of a new CD featuring the still creative and innovative Tut Taylor at age 85, we were involved in a local radio station that's quite a favorite. Host Steve Handy arrived just in time to go on-air, glowing with enthusiasm and energy. He hit the decks running and kept the event lively and interesting through the next two hours. I commented to someone that I'd rather go to WKBC's Hometown Opry than attend The Grand Old Opry in Nashville. The hometown flavor and immediacy of a live radio program kept things interesting. During the program, Steve undertook to give away a number of small gifts and CD's in drawings, conduct a taste test for a variety of hot sauces, have two new guests to the Opry blow into Grandpa's Moose Call to the amusement of all, and to introduce fellow on air personality Ed Racey as both Edgar Alan Racey to read a poem and Sherlock Racey to recount an amusing crime story. Racey, in his regular role, reads the news. 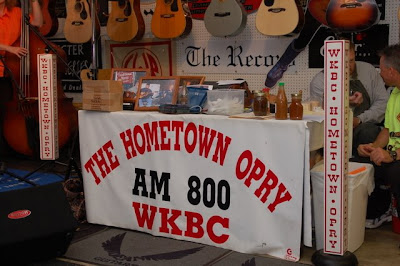 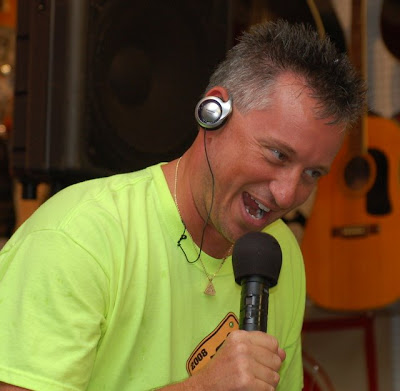 Edgar Alan or is it Sherlock Racey? 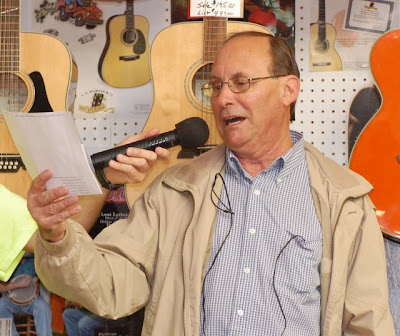 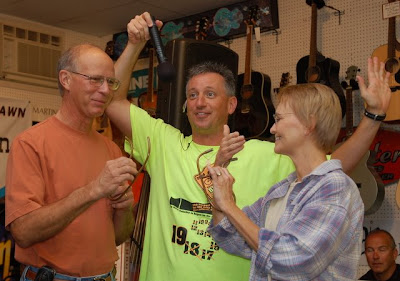 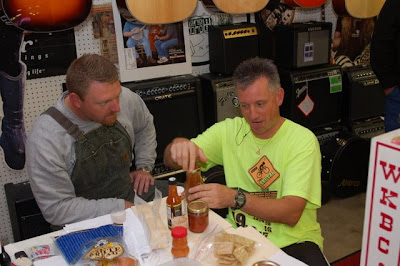 Minton's is owned by Jerry Minton and Mike Palmer who provide space for this weekly event. By nine o'clock it's all over, and local people head off to work. Visitors to today's Opry come from as far away as England, Key West, Fl, Tennsesse, and, of course, there's a couple from New Hampshire there, too. The Hometown Opry at Minton's Music & Pawn is a local event featuring fine music, good fun, and a friendly environment. It's a not to be missed visit!
Mike Palmer videos the festivities 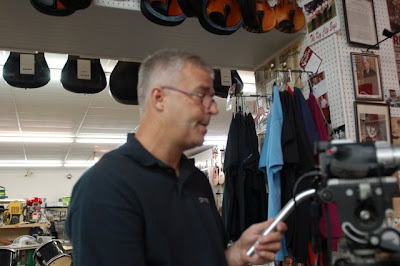 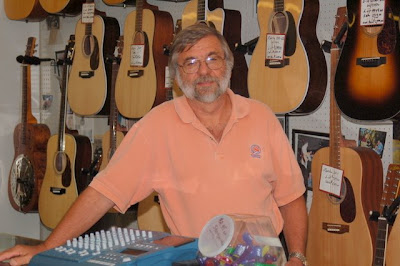 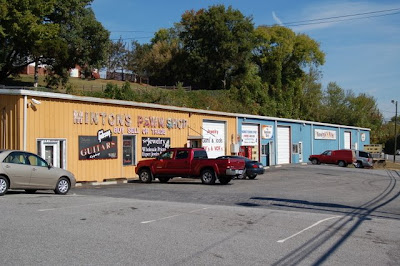