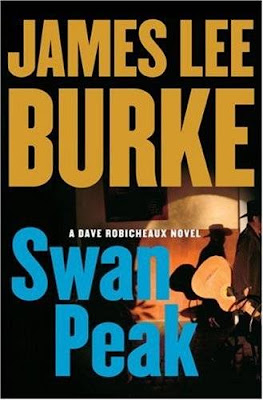 No one in a James Lee Burke's fictional world is undamaged. While there are good guys and bad guys, sometimes it's hard to tell them apart. Through eighteen often violent and beautifully written crime novels, Dave Robicheaux and, usually, his erstwhile sidekick, protector, ward, project, and always best friend Cletus Percell have raged against the evil in the world while always struggling against the devils within themselves. Both men seem never to age as time continues to pass and they still can't escape the quest for goodness or their own internal rage. Ghosts have often seemed to populate Robicheaux's life, not the kind of ghosts found in cheap horror movies, but the ones that haunt the haunted. Lately, as Dave Robicheaux and James Lee Burke age, at vastly different rates, the ghosts of earlier stories return to haunt Dave's present.
In Swan Peak,

the 2008 addition to the Dave Robicheaux series, Dave and Clete, accompanied by Dave's ex-nun wife Molly, are in Montana for an extended fishing vacation. The novel opens with Cletus peacefully fly fishing on a bucolic river. Adherents ot this series know that peaceful and Clete don't go together, and, sure enough, he is soon rousted by a nasty pair of security guards and told that he's not welcome on this piece of river. Meanwhile, a twisted guard at a private prison, who just happens to be a major investor in it, is working out his homo-erotic disabilities on a convict named Jimmy Dale Gilmore, who also happens to be a talented country singer. Jimmy Dale's erstwhile singing partner lives in Montana with her husband, one of the owners of the ranch where Clete has been trespassing. Complex enough? Well don't worry, I've left out the twisted televangelist, a breed which has become one of Burke's favorite targets, several brutal and mysterious murders, a couple of nasty pyschopaths, and a Eurasian FBI agent who intrigues and confuses Cletus, as does the wife of one of the land owners. And I like Burke's books.
It must be difficult to keep developing plots for characters who've interacted across eighteen novels written in the past twenty-three years. Robicheaux, whose age is indeterminate, but who remembers back to his childhood in the forties, fought in Vietnam, and has lived in New Iberia, Lousiana and Montana (not to be confused with his creator who lives in New Iberia and Montana). By my count he's approaching seventy, but still rages against the beast within and when things are particularly bad can lose himself, for at least a few minutes, in making love with the lovely Molly. No viagra for Dave. For most of us, the fires that drove us to make huge mistakes during our lives begin to fade as we age. Dave is still haunted by the rage that inhabits him and the urge to lose himself in drink, perhaps the central struggle in his life. Burke makes obligatory bows to AA frequently in these books and we do see that the program has helped focus Robicheaux's view of life. None of the social controls keeping Dave Robicheaux more or less in line inhibit Cletus Purcell, who is, nevertheless, Dave's best and forever friend.
James Lee Burke in Montana 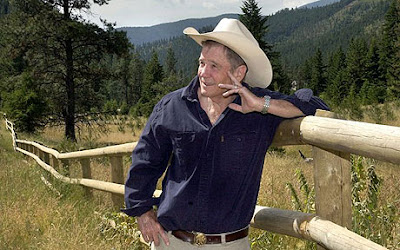 Burke's writing intersperses descriptive passages using color and smell with wonderful effectiveness as he depicts the landscape of his two beloved locales with the stark violence he claims is always just along the border of our humanity. The great attraction of Dave Robicheaux is his struggle to submerge the monster within him as he battles those who have allowed the monster to take over their lives. His villains are usually the rich and (sometimes) famous who've allowed themselves to be fully corrupted. There are very few middle ground characters in a Burke novel. One of the elements standing out in Swan Peak is the suggestion that there is healing and redemption possible for at least some of the characters you wouldn't expect to be see come to terms with their flaws.
While Swan Peak

has a few too many characters and a more than usually complex plot for a Burke novel, it sure is better than the Dan Brown piece of junk I just put down after struggling through ten pages. If you haven't met Dave Robicheaux yet, don't start with this story. Rather, go back to some of the earlier volumes in the series and come to know these characters before taking them on here. All of James Lee Burke's Dave Robicheaux books as well as another series and some stand alones are available on line. Support your local independent book store.
Posted by Ted Lehmann at 6:34 AM