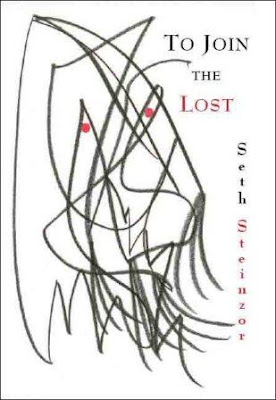 Dante Alighieri wrote what has become known as “The Divine Comedy” between 1308 and 1321 in Italian, rather than the current lingua franca of Europe, Latin. In it, he is guided through Hell, Purgatory, and Paradise, first by the Roman poet Virgil and then by his true love, Beatrice. His use of the vernacular Italian signaled a new literary language accessible to common people as well as scholars. The architecture of The Inferno takes Dante under the protection of Virgil through the circles of Hell, where he meets many of the figures of his time as well as those of history. A Florentine, Dante was deeply involved in the politics of his time, taking the Guelph side in their wars against the Ghibellines. One of Dante's pleasures in writing The Inferno apparently had much to do with allowing him to settle scores with his political and social enemies. This is probably all the background a reader needs to have in approaching Seth Steinvor's ambitious poetic novel To Join the Lost.
The Map of Dante's Hell 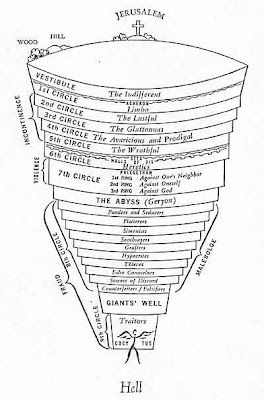 In To Join the Lost the narrator is pretty obviously based on a person who looks and sounds a great deal like the author, Seth Steinzor. He describes himself as “a very contemporary Jewish-Buddhist American” whose experiences include lots of spiritual exploration, a range of jobs in various parts of the world, spending a good deal of time in Italy. At present, he supports his writing habit as an attorney in Vermont as a civil rights investigator and lawyer, and in social services. The narrator is joined by Dante himself at the gates to Hell and the two begin a journey down through the nine circle of Hell described by Dante. Like Dante, Steinvor writes in a form of verse containing stanzas of ten lines divided into thirty-four Cantos (means songs, but read chapters) dealing with the torments of the underworld. When I first picked up this rather slender volume, I was taken aback by the long narrative poem format. However, it didn't take me long to realize that Steinvor was taking me on a trip through the many horrors of the twentieth and early twenty-first centuries with a few side trips to earlier periods. I was more than a little surprised to find Thomas Jefferson assigned to the eighth circle among the hypocrites.
Virgil Conducts Dante through Hell
According to Albrecht Durer 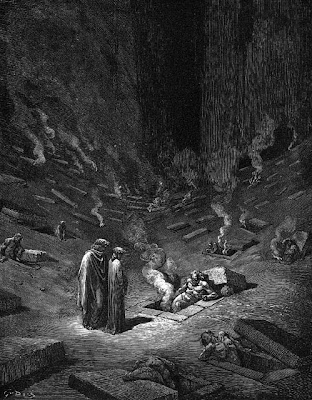 Steinzor uses contemporary language and idiom, so you can expect some specific anatomical references as well as course and profane language. You can also find a raging wit coupled with thoughtful explorations on the nature of sin and evil, sometimes combined into one. Rather than cross the river Styx to Hell, the pair is conferred there by subway (of course, after all, where are they?) where they soon meet both Robert McNamara, Nietsche, Rabbi Kehane, Strom Thurmond, and Idi Amin. At first I thought Steinvor leaned heavily toward the right to select his villains and malefactors, but he turns out to have a pretty accurate nose at the end of several political spectrums. Nevertheless, as with Dante, who was associated with a particular political party and used The Inferno to settle scores, so, too, does Steinzor have his own favorite bad guys.
“Eternity, therefore, is like an ocean with currents
that swarm and braid and branch and carry
many riders. Like you, each is bound for where he's
going and thinks there's nowhere else.” (43)
So Steinzor's vision is both deeply personal and broadly universal. He weaves in incidents from his own childhood and young adult memory, happy as well as terrible ones to suggest ways in which his view of Hell is impacted by his own experience. Another person, on the same journey would encounter different people being tortured in different ways.
The work takes a good deal of time placing religious hypocrites in various circles. He encounters Pope Pius IX in whose circle
...those who
presumed to rise above fallible mankind
and speak for god. Here's Jim Jones, a gaggle
of Southern Baptists, the ayatollah
who lowered the fatwah on Salmon Rushdie. Hindu
fanatics, a gang from the Thirty Years War.” (89)
Steinzor also explores varieties of love, both straight and gay, but finds no redemption for pedophiles. He includes Wall Street bankers, political fixers and many more. Finally having quoting Thomas Hobbes as saying, “Hell is truth seen too late,” which seems to have been quoted a great deal elsewhere. Somehow, Sartre's remark that “Hell is other people,” doesn't make it into this work. Nevertheless, the book is filled with aphorisms, many of which carry the ring of truth with them.
Seth Steinzor 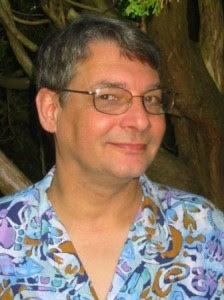 Most of the names Steimzor uses as examples are a familiar to a literate early 21st century reader as the names Dante uses in The Inferno would have been to fourteenth century Florentines. Part of the fun of this book lies in these insights coupled with the appropriateness of their torment and the liveliness of the imagery. Finally, after facing and feeling superior to the sins of others, the narrator must confront himself, perceiving the contrasts and similarities between himself and those who are in torment.
While I detect a decided rightward tilt to those Steinzor assigns to the descending rings of Hell, at the bottom he encounters both Joseph McCarthy and Julius Rosenberg, suggesting a moral equivalency between them. In the end, both Steinzor's and Dante's descents into Hell represent both a political screed and a moral exploration of the human condition. Steinzor takes us through our own times, always reminding us that we are human and, perhaps because of this, damned. Unlike Dante, he does not appear poised to have his character meet true love and ascend to Paradise. I have to hope that this is because of the poet's predilection and not the the certainty of the contemporary world in which we find ourselves.
To Join the Lost is a lengthy narrative poem  following the model provided by Dante in The Inferno. It is both fun to read and more than a little disquieting as the failing of our time are brought before us. Steinzor uses easily accessible language and imagery to capture and hold the reader's attention. His humor is often wicked and a bit bizarre. The book is published by Antrim House a small publisher located in Simsbury, CT. The book is also available from Amazon. It was provided to me by the publisher through TLC Booktours