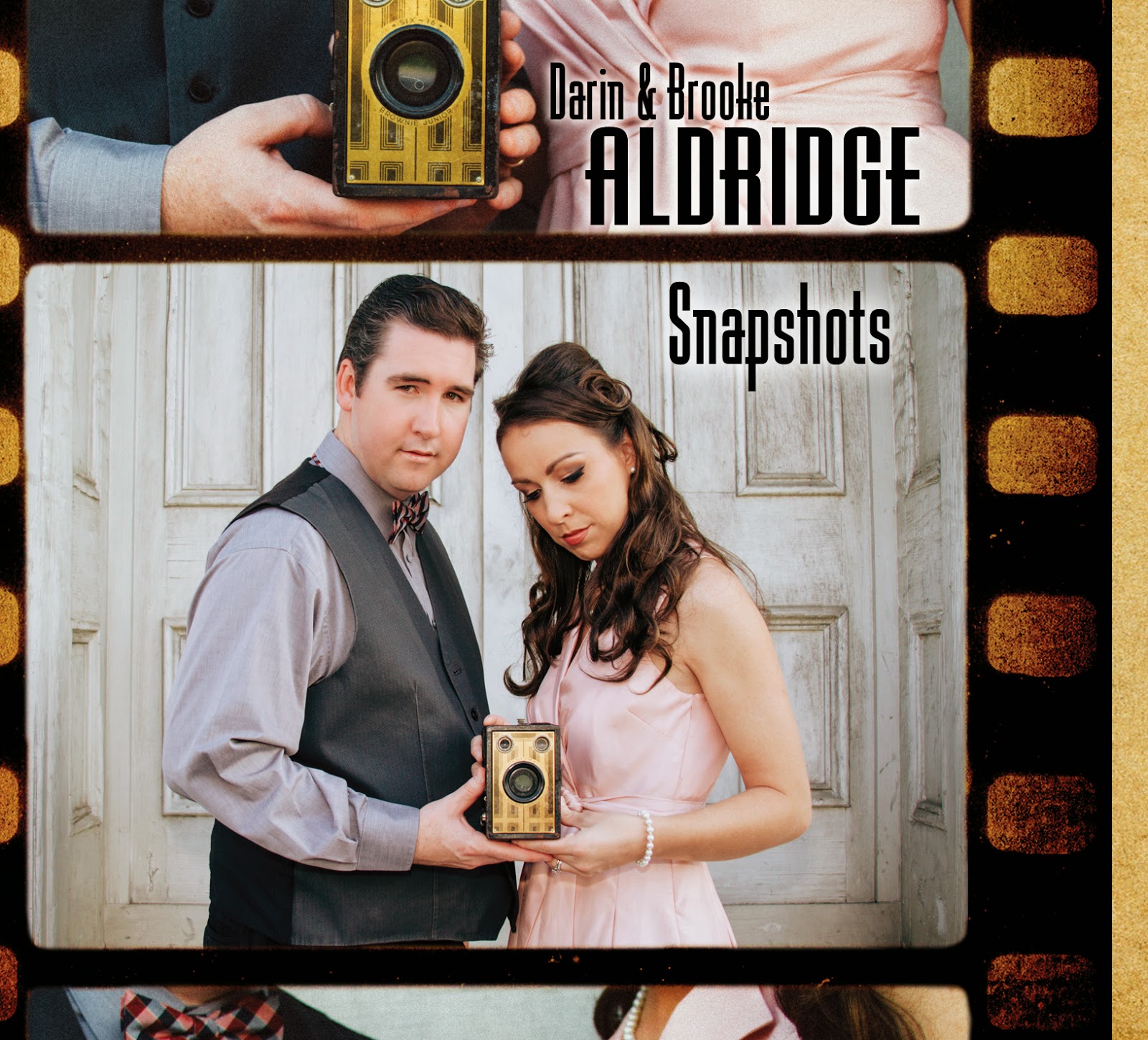 Snapshots is the sixth album Darin & Brooke Aldridge have released, a collection of songs highlighting “bits and pieces of our past. Snapshots includes songs that showcase bands we've always admired or been a part of, songs we've always loved or written, songs we grew up hearing on the radio, and songs folks have passed along to us that have helped them through difficult times in their lives.” The recording includes songs of commitment, faith, and hope, just the sort of material this duo has highlighted throught their career.

Most of the band on Snapshots is composed of Becky Buller-Haley on fiddle, Tyler Collins on banjo, Collin Willis on Dobro, and Dwayne Anderson on bass. Included are guest appearances by Sam Bush, Ricky Skaggs, Bobby Hicks, and Steve McMurry. As usual, Darin Aldridge doubles on mandolin and guitar thanks to the wonders of modern recording. Brooke's wonderful voice dominates the recording. Known for her vocal power, Brooke's sublety and thoughtful interpretations are always a consistent component of her singing. Songs spanning a period from the late nineteenth century to fresh out of the box show the range of material the duo uses and their keen ability to make each piece their own. 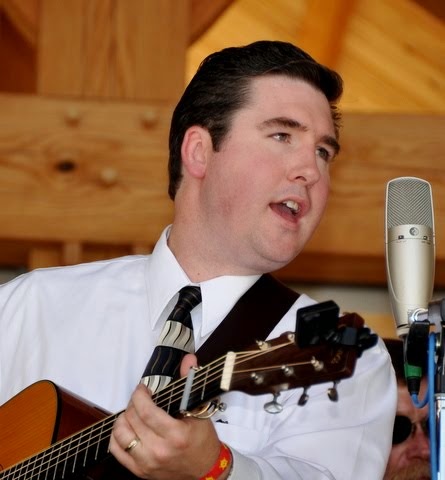 The album opens with an upbeat gospel song written by Marty Stuart and Jerry Sullivan and featuring Sam Bush on mandolin and harmony vocal called Get Up John. This is a lively, driving song urging John the Baptist to haul himself out of bed and get to his appointed responsibility of meeting Jesus at the River Jordan to annoint him for his ministry. Brooke Aldridge's clear, powerful voice awakens the listener on this opening track as it's intendend to get the Baptist going, too. The song stands as a powerful demand for John as well as an attention getter on this album.

Bill Monroe's Rose of Old Kentucky takes more than an obligatory nod to the father of bluegrass music in a thoughtful twining of Darrin and Brooke's voices around Bobby Hicks' guest fiddle and Darin's mandolin. This song, reportably one of Bill's “true story” songs, along with Sweet Georgia Rose was first recorded in the famous Columbia Records recording session in 1947 and 1948 with Flatt & Scruggs in the band, which helped catapult Bill Monroe & the Bluegrass Boys to stardom. Because it combines the historical provenance with Darin & Brooke's commitment to wholesome love songs, it functions on a number of important levels in this album.

Gillian Welch's Annabelle features the members of the Darin & Brooke Aldridge touring band. I'm a fan of hearing the band I see at festivals on the CD's the band produces. While I know that guest artists add to the glamour and allure of a recording, we buy CD's not only to support the band, but to try to re-create the experience we had seeing them at festivals we attend. With a plaintive opening instrumental sequence provided by Colin Willis on the Dobro, Tyler Collins on banjo, and Becky Buller-Hayley on fiddle, the song asks how we can understand the difficulties of life “until we've all gone to Jesus, we can only wonder why” as the character in the song contemplates the difficulties and hardships that life and death in the mines or the fields present. The arrangement exudes both mystery and hope in the plaintive blending of Darin and Brooke's singing with the music. 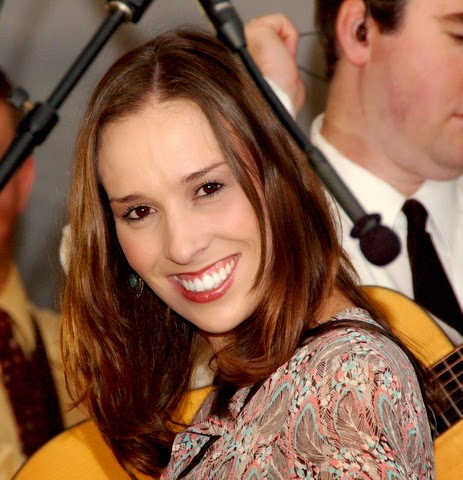 Lets is an aspirational love song about doing the things in life that bring pleasure while demonstrating the bond of a couple. Written by Eddie Adcock, the song is filled with lovely images of high mountains, beautiful vistas, and strong togetherness. The driving banjo is no surprise here, considering the writer. Tyler Collins has his own style that works better than fine here. Becky Buller, in her last recorded appearance on a Darin & Brooke album, plays fiddle on all the cuts which have a fiddle. She has since left the band to form her own. People seeing the Darin & Brooke on the road and in future recording will enjoy watching, and hearing, the contributions of the young, but quite accomplished, Carli Arrowood, who has joined them.

When He Calls is a gospel song with a guest appearance by Ricky Skaggs written by Paul Kennerly. Skaggs' voice blends into a beautiful trio with Darin & Brooke's strong and fervent duet singing.

Tennessee Flat Top Box captures the flexibility of Brooke's voice in a bluegrass interpretation of Johnny Cash's popular country song. It will prove to be popular in the way her earlier I want to be a Cowboy's Sweetheart has. She can consistently deliver a song with strength and conviction. Darrin's presentation of the guitar solos captures the spirit of the original. Jim Solde played the solos on the video I watched, Darin got it just right. It takes courage to cover Cash this way, and Brooke and Darin pull it off.

Let it Be Me (Becaud, Curtis, Delanoe) was first recorded in French in 1955 and later became a world-wide hit by the Everly Brothers, whose most popular recording was released in 1960. This is a classic love song interpreted by this duo which has specialized in heartfelt love songs. Darin & Brooke have brought the song up-to-date with some interesting vocal moves that take the sappiness out of the original. Darin's opening mandolin solo sets the tone and later returns with subtle, warm figures. This rendition shows the qualities that change a cover into a serious reinterpretation of a wonderful song.

The next song, He's a Coming (Whyte, Shaffer, Smith) strikes a welcome and sharp contrast to the previous one, as a peppy, upbeat gospel song with Becky Buller adding her vocal spark in a harmony. Brooke shows her vocal versatility by contrasting her voice against the darker, more sultry voice found in the previous song. Matt Love revisits his former band-mates on banjo in this cut.

Written by Steve McMurry, a former bandmate of Darin's with “Acoustic Syndicate,” A Better Place is a long song about the search for faith and self through seeking to reconnect with one's roots and the welfare of a loved one. Strong instrumental work.

Darin with, his lifetime friend Dr. Bobby Jones, a phsysician from Shelby, NC who wrote a terrific blog examining the life of a small town doctor who was also a musician and a golfer under the pseudonym of Dr. Tom Bibey as well as a novel The Mandolin Case before his sad death in 2012, wrote this lilting gospel song. The song stands on its own, but is also a tribute to a key anchor in Darin's life.

Snapshots concludes with a classic Darin & Brooke duet called Wait 'Til the Clouds Role By attributed here to Uncle Dave Macon, but with a much older history referred to in a broadside published in Scotland dating it back to 1880 or so and copyrighted by T.B. Harms. The song, sung as a duet accompanied by Darin on the guitar, is a lovely pledge of enduring commitment, a fitting way to end an album that is arguably the best work Darin & Brooke Aldridge have done since their debut recording. 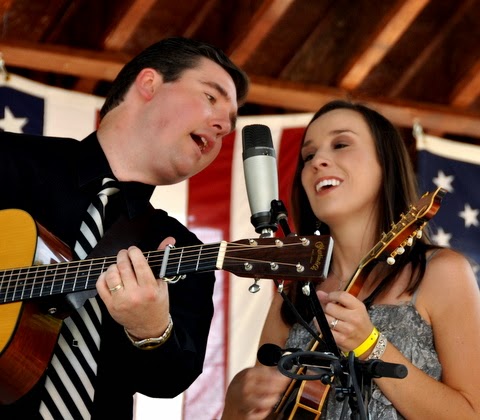