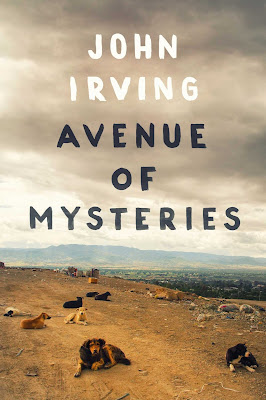 John Irving has written an elegy to a writer's life, perhaps his own, in Avenue of Mysteries (Simon & Schuster, 2015, 480 pages, $28.00/11.99) which revisits many of the themes and concerns that have dominated his work since I first encountered him in The World According to Garp. Issues of the search for a parent, sex and sexuality, sexual ambiguity, as well as religion and faith dominate this wandering novel that follows Juan Diego Guerrero's life from his earliest memories as a child in the burning dump of Oaxaca, Mexico thorough an elegiac literary trip to the Philippines, where he seeks to visit the remains of a dead friend's father. The book's action takes place almost entirely within Juan Diego's mind as memory and imagination merge and twist within him. I wanted to like this book more than I did, as I followed what I will presume to be Irving's most recent and final exploration of his own life and thought in the novel format.

Images of the burning, stinking dump and the Virgin of Guadalupe dominate this reflective meditation on writing and writers, faith and belief, and loss. Juan Diego and his sister Lupe are each damaged, he because his (maybe) father Rivera drives over his foot in childhood, leaving him a limping cripple for life. Meanwhile, he becomes a voracious reader as he salvages books from the dump's burn pile in both English and Spanish. He also becomes the interpreter for Lupe, who, while she cannot produce speech comprehensible to anyone but Juan Diego, can read minds and, perhaps, see the future. She discovers that she must sacrifice her life to make it possible for Juan Diego to develop his own, as he eventually makes his way to the University of Iowa, where he embarks on the life of a writer. The story is told in a series of flashbacks while Juan Diego makes his trip, accompanied at times by the mysterious Dorothy and Miriam, both sexually demanding, controlling, and knowledgeable about his life and writings. The plot is as convoluted as my paragraph, but eventually works itself out without ever losing its mysterious sense of Juan Diego's success and sense of loss.

The book is filled with aphorisms and meditations on the writer's life, perhaps a writerly quirk aging authors must fall into. Juan Diego cannot escape the fussily oppressive ministration of his former student Clark French. He's eternally grateful to Edward Bonshaw and his eventual partner Flo (the sexually ambiguous transvestite). He encounters the life of the circus (or is it the circus of life?), where he learns and grows, but never forsakes his limp. The range of characters will either grab readers or leave them gasping for breath, or both. Each one has a symbolic quality which becomes a ghost in Juan Diego's life until reality and imagination become inseparable. The iconography and symbolism of the book can be confusing, but become increasingly clear as it moves towards its relatively satisfactory conclusion. At one point, Juan Diego comments, “Dreams edit themselves, are ruthless with details. Common sense does not dictate what remains, or is not included in a dream.” Later, Juan Diego considers himself, “Yes, his novels come from his childhood – that's where his fears came from, and his imagination came from everything that he feared. That didn't mean that he wrote about himself.” Oh no? 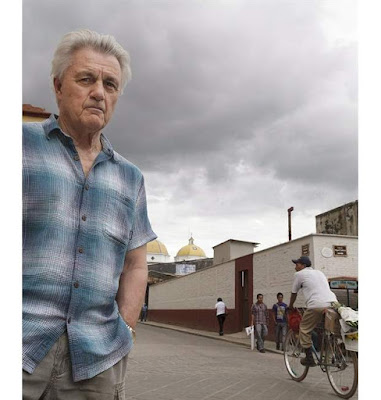 John Irving, at age 73, has written fourteen novels, a screenplay for one of them (for which he won an Academy Award), won lots of acclaim, and wrestled, both literally and literarily, with life and literature throughout it all. Raised in the shelter of New Hampshire's Exeter Academy, he never met his biological father, who, nevertheless, attended many of his wrestling matches (what a wonderful image that is!). During his career as a writer, he has been on the short list for a Pulitzer Prize, but hasn't won one. Nevertheless several of his books have been huge commercial successes and/or have been turned into successful films. Several of his books have been best sellers, but none have achieved number one. Avenue of Mysteries was the first Irving novel I completed reading since Hotel New Hampshire some thirty-five years ago, although I took runs at both Cider House Rules and A Prayer for Owen Meany, both best sellers. In other words, Irving is not always everyone's cup of tea, but is an important American writer and literary figure.

John Irving's Avenue of Mysteries (Simon & Schuster, 2015, 480 pages, $28.00/11.99) turns into an interesting, intriguing meditation on writing and the writer's life. It's tortuous plot demands careful attention. The characters are often mysterious, arresting, and intriguing. It should prove to be a rewarding read for many people who have followed Irving through the years, but I wouldn't recommend it as a first Irving book. This would seem to be more a summation of a career than an opening salvo, so begin somewhere else and then reach out for it when you have become familiar with Irving through his earlier work. I read the book as an e-galley supplied to me by the publisher through Edelweiss: Above the Treeline. I read it using my Kindle app.
Posted by Ted Lehmann at 11:00 AM