Today marks the beginning of the tenth year of this blog. When blogging came around, I was intrigued by the concept, and thought I'd like to write a blog, but wasn't certain I had anything to say that would be interesting to anyone else but me. I had done some previous writing on the web, building a site and then telling about our adventures as I learned to to use this new resource as well follow my own inclinations. If you're interested in this earlier effort you can find it here. It begins in 2000 and continued until 2003, with our first visit to Merlefest and some other major changes in our life. For some years I had thought it lost, but there it is, an interesting, for me at least, look backward.

Anyway, after some thought and no little agonizing, I posted my first blog entry on December 22, 2006, thinking mostly of it as something to do and a chance to keep our families, friends, and acquaintances in touch with what we were doing. But the audience grew, largely, I think, because of an accident. When I started writing about bands at festivals, I decided to take and label pictures of sidemen as well as band leaders. And, of course, the sidemen liked being recognized, and my blog benefited from it. Since December 2006, I've posted 1257 blog entries, about 80% being devoted to bluegrass music with most of the rest being book reviews. That's 139.66 blog entries a year or 2.5 a week. This year the blog itself has declined in number, but it's a bit more complicated than that.

Last March, I received an email from Kim Ruehl, the editor on No Depression, an online magazine that has flourished after going down the tubes as a print journal of alternative music several years ago, asking me to write a weekly bluegrass column. I leaped at the chance, realizing that such a column would give me a wider, more eclectic audience to write towards. Since then, with the exception of a couple of months when I was cut back to every other week, I have written a column called Bluegrass Rambles of about 1000 words with photos and videos about anything I want to write that I could relate to bluegrass music for No Depression. I have written thirty-eight columns there, which would bring my productivity up to my previous years' standards. I'm proud to have been asked to join the staff of this fine journal. This year they also published a beautiful hard copy annual, which is still available.

As the Internet has developed, so have opportunities to integrate my blog with other platforms to write about and publicize events, festivals, and bands that interest me, as well as to write about books I've read and, mostly, enjoyed. This year I added 95 new videos to my YouTube channel. During this time, there gave been 689,274 views of our (Irene often serves as videographer) videos, with the Josh Williams “Bird Video” still leading the way with nearly 150,000 views. Here's a screen shot of this year's top 10 videos: 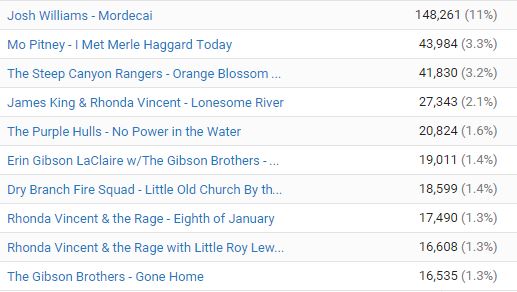 Notice Erin Gibson LaClaire sitting there in sixth place with her “Lifeboat” recorded in 2011. I have great hopes for her version of “The Little Drummer Boy” recorded at this year's Gibson Family Christmas show. It has already been viewed more than 2700 times. We actually wore out a video camera this year, and had to purchase a new one, thereby improving the quality of the videos I post. Over the lifetime of the channel, it has received 4.7 million plays, with the “Bird Video” accounting for more than half the total.

We have a FaceBook Page called Ted & Irene's Most Excellent Bluegrass Adventure that's supposed to be a “business” page. It hasn't produced the kind of interest I had hoped, and I refuse to utilize the Boost feature, which, I suppose, would have it sent to a greater number of people, but which costs money. I post only bluegrass related material there, most of it my videos, but I also have had good response to fine videos from other sources that I find. I use my own Facebook page to post bluegrass related material, pointers to my blogs, as well as political, social science, and science material I find interesting. Since my interests are pretty broad, so is the coverage on my FB page. Apparently, Twitter appeals to a different audience. I posts tweets to advertise my writing and videos, but it's also the place I go for a good portion of my news, so I follow news sources I trust there. I haven't yet figured out how to use Pinterest, but I'm certain I could find an audience there if I took more time and learned. Same with Instagram, which I vow to work on this coming winter. I view social media as a fine tool for contributing to and learning about the world. Google+ seems to miss the point a lot of the time, but is calmer, more quiet with less bluster, than FaceBook, at least in my little corner.

All in all, it's been a good year, and we're looking forward to getting back on the road after a couple of restful months at home. We'll leave in early January before, we hope, the New England snows come, but, in truth, the Fall has been too warm, and we wish the region plenty of cold weather and snow. The farmers, ski areas, and tourist industry all need it. Meanwhile, I want to thank some people. Kim Ruehl has offered my a wonderful opportunity at No Depression, which has helped me find a new and more varied audience. There's a quiet, invisible to all but me, but large group of people (you know who you are) that have served through the years as my Editorial Board. They're the ones who've cared enough to correct my errors of writing and fact, without trying to make me change the opinions that I express. You've made my blog, as Harry Chapin said in one of his great story songs, a better place to be. I especially want to thank readers who ordered their merchandise at Amazon.com through the portal on my blog or clicked on an advertisement there. It helps provide much needed financial support for the blog without costing you any more or compromising your privacy. Thanks so much! Finally, I want to thank my long suffering (coming up on 52 years) wife, Irene. She's the best line editor in the world, and often saves me from myself, when I want to say things that may be thoughtless or hurtful. She's simply the best!

If we cross paths during the coming year, please stop me to say “Hello.” Maybe we're already social media friends, but I value making face-to-face contact with people who've read and appreciated what we're trying to do. See you down the Trail.