I’ve written several times on this blog about how we, as festival attendees, find it difficult when people decide to dance in front of the stage. I’m currently reading Daniel J. Levitin’s book This is your Brain on Music which has recently been released in trade paperback. Ordinarily, I would wait to comment as part of a review of the book, but Levitin’s important book has me buzzing, and I will probably write several pieces during the next couple of weeks before writing a review of the complete work. 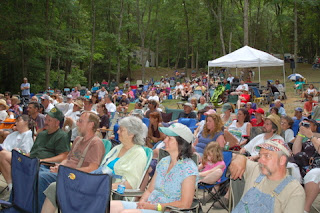 Early in the book, Levitin points out that throughout most of human history musical performance and consumption have been inseparable. People played instruments, they sang, and they danced. It is only in recent times that professional performers have produced music for people to listen to without direct involvement in making the music themselves. He also asserts that from earliest times people have moved to music in some form of dance. Movement may be an inseparable part of how many people experience music. We tap our toes, nod our heads, move our shoulders, and rise to our feet to move in rhythmic response to music. How much we respond depends very much on the context in which we experience the music. Imagine an a 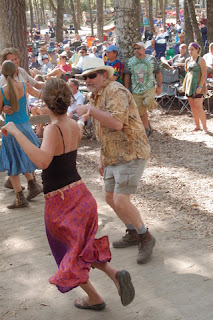 udience at a symphony orchestra concert rising to its feet and writhing to the music. Imagine the congregation of a black church in the south standing rigidly, just singing along with the congregation and the organ. Put these imaginings in the context of a bluegrass concert.

My understanding has been that bluegrass music originated as show music performed by professional musicians for seated audiences. The hard driving nature of the music was not generally seen as being “dance music.” Nevertheless, many people who attend bluegrass festivals feel drawn to movement, expressed as dance, as a way to appreciate the music and participate in it. I buy this idea. There’s a problem, however. People who attend bluegrass festivals fall into several different categories, broadly expressed. They come to listen, to watch and listen, have the music as background while they read or complete puzzles, or listen, watch and dance together. How can promoters respond to the desires of different parts of an audience to express their appreciation and enjoy the musi 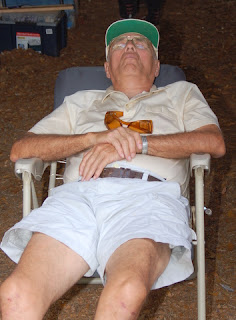 c? How can people attending festivals show their consideration for others and still have the richest experience available to them?

Recently, at the Otis Mountain Music Festival, promoter Jeff Allot tried to respond to this issue by moving dancers to the side and roping off an area in front of the stage as a sort of no-man’s land. This worked quite well during the day, but as the music heated up in the evening with the Infamous Stringdusters followed by Sam Bush, the audience became increasingly restive and, with the encouragement of Bush, finally invaded the area. Alott wisely took down the ropes and the crowd pushed toward the stage. Actually, dancing was reduced, but the close proximity of audience to performers increased the excitement of the performance which culminated in a twenty minute jam including the two bands together on the stage. It turned into a great festival moment. There was a fly in the ointment, however, when an elderly couple seated right at the rope line, objected bitterly to their site line being obscured by all the people crowding to the front. They eventually folded their chairs and left.

Usually Irene and I seat ourselves as close to the front of an audience as we can. She likes to watch the mandolin and Dobro players as closely as possible, often using binoculars even from the fron 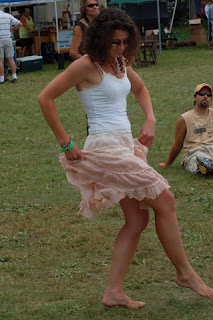 t row. I take pictures for this blog as well as for bands and promoters, often leaving my seat to get better angles or different kinds of pictures. On this evening at Otis Mtn. we found standing room that suited each of us, but at one point I moved thirty yards to the rear and found the view and sound to be excellent, so long as I didn’t want to take pictures. I realized that the good natured pushing of the crowd to the front was a natural response to the power of the music. On the other hand, at Springfest this year, the crowd insinuated themselves to the front and blocked everyone’s view while continuing to smoke, a direct violation of festival rules. A minority of fans ruined the experience for a large number of viewers.

Many festivals we attend encourage dancers to use 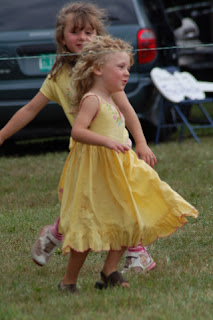 an area to the side, close enough for them to feel the music while not obstructing the views and enjoyment of those who wish to be more passive in their enjoyment. Merlefest, because it has a huge reserved seat area, provides only a narrow grassy area to one side for dancers and restricts the more unrestrained response to the far rear. Other venues there have more openness for dancing. Both Merlefest and Grey Fox provide a separate dance tent where bands whose music particularly evokes a dance response play late into the night. Strawberry Park has a large platform to the right of the stage where dancers have great sight and listening access and plenty of room. In the end, it probably boils down to planning on the part of promoters and consideration on the part of attendees. Bluegrass music draws a wide variety of responses from its adherents and all music fans should find themselves equally comfortable while they seek to enjoy and respond to the music. 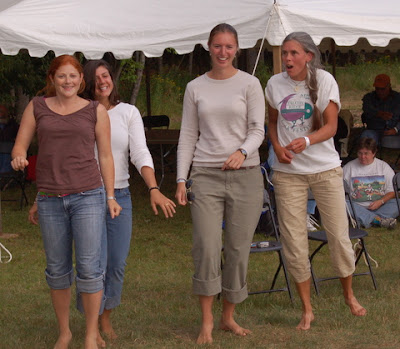 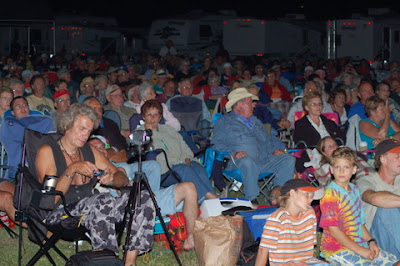