The One Percent Doctrine by Ron Suskind

The One Percent Doctrine, as defined by Vice President Dick Cheney, is that if there’s a one percent chance that a terrorist threat exists, America should take action immediately. In this carefully researched, but necessarily not broadly sourced or annotated, book, Suskind demonstrates how the Bush administration has essentially changed the way America faces the world. He shows that instinct and rumor have replaced evidence as the trigger for American action in the world. He also shows how preemption has replaced reaction as the major mode of American military strategy00. As a result of these two changes, our ability, as a nation, to respond to crises around the world has been compromised and our prestige in the family of nations has been all but destroyed. The legacy of the Bush administration, at th 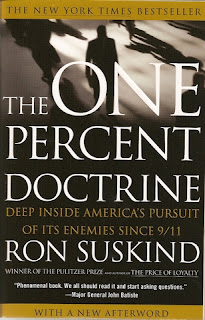 is point, seems to be to turn our country inward in spasms of fear and to isolate us from being the constructive force in the world his own rhetoric seeks to create.

The world Ron Suskind pictures in The One Percent Doctrine is one in which the readers of John le Carre´ would be more comfortable than the viewers of Fox, CNN, or MSNBC or even the readers of The New Yorker. It is a shadowy world inhabited by agents of the world’s major intelligence agencies rushing desperately to assemble a case designed to give George W. Bush, Richard Cheney, and Donald Rumsfeld the ammunition they need to undertake the campaign they already know they want to pursue. It is a world filled with ghosts of information, digital blips of knowledge overseen by people panicked by the destruction and death of 9/11 and the escape of Osama bin Laden from Tora Bora. Traditionally, the FBI has been oriented toward assembling evidence in order to undertake prosecution of crimes. The CIA has developed evidence to assist the President in making policy decisions. At least one arm of the CIA also engaged in covert operations in countries around the world in support of policy decisions. The CIA was prohibited from engaging in activities within the United States and the FBI was almost entirely a domestic agency. Neither regularly communicated with the other. The events of 9/11 and the Bush administration’s drive for “Action” required both agencies to operate in ways that are opposed to their cultures. This fascinating book details why that effort has, more often than not, failed to yield the desired results. It also shows that, while the threat is real and immediate, the remedies that work well to counter the threat have been ignored by the adminstration.

During the years since the first Gulf War, despite the fact there were a number of terrorist attacks resulting in American deaths, the policy of the Clinton administration, largely followed U.S. policy enunciated by George Kennan in the 1940’s with reference to the Soviet Union, was a successful one of containment. Saddam Hussein had been contained and his wealth and power diminished during the period since 1991. A major change undertaken by the Bush administration has been to move from a policy of containment and retaliation to one of preemption or even preventive attacks without “actionable intelligence” to supply the necessary evidence to create a rationale for such preemptive action. The policy became one of prevention based on the suspicion of risk. The 1% Doctrine means that normal caution in taking action is put aside if even a 1% chance exists that suspects might act to harm the U.S. Without sufficient evidence and given a president who is oriented toward taking action and impatient with policy issues and careful analysis, vast FBI, CIA, and other agency resources became devoted to following his whims and “instincts.” Probable cause was no longer necessary.

Much of this discussion was held under a “need to know” practice which effectively insulated various government agencies from sharing information that, had it been put together, might have yielded conclusions quite different from those the administration reached. One example can be found in the concern over the reported acquisition of yellowcake uranium and aluminum tubes by Iraq that resulted in an NIE estimate the administration used selectively to argue the risk of Weapon of Mass Destruction. Bush’s learning style and his reliance on Cheney’s experience with the Nixon and Reagan administrations, where he felt presidential prerogative had been substantially diminished has led to a series of poor decisions. These forces led to the administration pushing an idea too far and to the invasion of Iraq.

Another example of the mis-use of evidence is less well known, but deeply illustrative. Interception of e-mail correspondence among certain Americans of middle eastern origin indicated they were seeking to large spaces in Kansas. Certain key words suggested some sort of bombing plot, people were arrested and large resources used. In the end, it turned out that the men were entrepreneurs seeking storage space for merchandise to stock flea market booths. This kind of over-reaction and preemption has the effect of providing political support for the administration through its willingness to promulgate fear without evidence. Rice’s comments about a mushroom cloud and the idea to fight them there rather than here are examples. The color code warning system is another. On the other hand, the thought that we have not been attacked again because alQaeda has chosen to separate our friends from us through bombings in Indonesia, Great Britain, and, most horrible of all, Spain has never been voiced by anyone in the administration, which chooses to see the absence of attacks as competence in our management of the “war on terror.”

The One Percent Doctrine sheds much light on George W. Bush’s personal style and the danger it represents for our military posture as well as the costs to us as a nation founded on freedom and justice. The country could probably have withstood the costs of Bush, Cheney, or Rumsfeld pretty well, but the three together represent a perfect storm of possible disaster. This book is well worth reading and thinking about. This book is currently being offered here coupled with Fiasco, reviewed earlier here at a substantial discount. Read together, these two books represent an indictment of the Bush administration that is almost impossible to rebut.