This is Your Brain on Music by Daniel Levitin - Review

This is Your Brain on Music by Daniel J. Levitin

What is music? How do we perceive it? In what ways does it influence us? How has it figured in our development? Why do we love the music we love? What does it take to become an expert musician? How are human evolution and music related? In this fascinating and inform 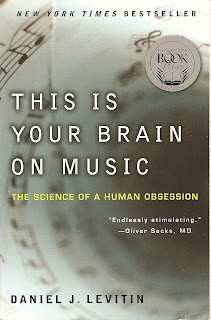 ative book, Daniel Levitin takes on these huge topics and makes them understandable to informed lay readers. Levitin’s background certainly gives him the chops to write such a book. Levitin runs the Laboratory for Musical Perception, Cognition, and Expertise at McGill University, where he holds the James McGill Chair and the Bell Chair in the Psychology of Electronic Communication. (Don’t Stop Reading Here) “Omigod,” you exclaim, “this has got to be one of those scholarly tomes that only a specialist can get through.” But you’re wrong. Before becoming a world esteemed scholar in his specialty, Levitin had, and has, a life in music. He played guitar in a California garage rock band, went on to producing records, attended Stanford University, Berklee College of Music, and earned his PhD at the University of Oregon. His book is filled with delightful stories from each part of his life, which illustrate many of the points he makes about music.

Along the way, Levitin explains a lot about how the brain takes music in and how the mind makes sense of it. He examines the components of music: pitch, rhythm, tempo, loudness, timbre, contour, and reverberation. He explores how vibrations in the air become music in our minds. He looks at the way in which music has been a part of human communication since we emerged, and how we have become divided into music producers and music consumers. Each of his concepts is explained by examples from the world of brain research and illustrated with specific examples from almost every genre of music. For those of us not as widely familiar with the entire wide world of music as he is, Levitin provides audio examples of every musical piece mentioned in the book at his website in the section on interactive examples.

Perhaps the two most interesting chapters are Chapter 7, which deals with what factors combine to make an expert musician, and Chapter 8, which examines why we like what we like in music. In the chapter on becoming an expert he treats such topics as talent, practice, and creativity. The latter chapter was widely discussed during Levitin’s book tour. In it he examines the way in which our musical preferences are formed, much as many of our other values develop, during adolescence. He also links our musical preferences to matters of sexual choices having to do with atavistic mating displays designed to show power and virility. It’s all thought provoking, whether you agree or not. Levitin doesn’t make such claims lightly, but provides a thorough background in the scientific literature.

While I expect to write another piece about this book with particular references to its importance for bluegrass music, one issue is worth noting. Levitin describes how, throughout most of human history, it was impossible to separate the musical performer from the musical consumer. Most people were dancers, singers, players, and listeners simultaneously. With the rise of what is now called “classical” music, performance began to move to the concert hall. One of the great appeals of bluegrass music is that it has had a tendency to break down this barrier, particularly in festivals. Because bluegrass grew from a variety of musical sources, it has quite broad appeal. Many of the people who listen to bluegrass play one or more bluegrass instruments. People who come to love the music often learn to play an instrument if they didn’t play one before. When you attend a bluegrass festival, many people are there who don’t seem to spend much time in their seats listening to the music. Instead, they’re back in a campsite somewhere on the grounds making bluegrass music in jam sessions. This is encouraged by the promoters and the professional musicians themselves. In fact, many professional bluegrassers can be found around the grounds of a typical festival jamming when they’re not performing.

Suffice it to say, at this point, that for bluegrass music adherents this book has much food for thought. Levitin examines music from a perspective that few consider as they pick, sing, play, practice, listen, appreciate, and enjoy it. His thoughtful analysis of the components of music and how they create experience for each of us within our brains is stimulating. This is a “don’t miss’ book for people who are interested in thinking about the role music plays in their lives. It has recently been published in trade paperback by Penguin Books and can be purchased at any bookstore. Its price is $15.00 in the U.S.