The third annual bluegrass festival at White Oak Shores Campground in Stella, NC will be held over the weekend of September 28 – 29. Weekend packages including camping for two nights and tickets for both days are $150.00 for two people. Stella is located almost due east of Jacksonville, NC along the coastal marsh near Camp Lejeune, here. The campground appears to be an attractive one and the location can’t be beat, especially in early fall. It should be warm and pleasant, as well as comfortably uncrowded.

The lineup for the White Oak Shores Bluegrass Festival combines a strong set of local and regional North Carolina bands with two excellent touring national bands. Carolina Junction is a traditional bluegrass band playing a busy schedule, mostly in North and South Carolina. The cuts on their web site suggest they’ll be worth listening to. Al Batten & the Bluegrass Reunion have been around a long time and give a competent and enjoyable performance. We saw them in Florida two seasons ago, and they perform at a variety of good regional events. Ted Jones and the Tarheel Boys will close Friday’s show. Jones, a young mandolin player, is backed by his father and a full bluegrass band. They are another North Carolina group featuring traditional bluegrass and gospel music. Their cuts on their MySpace site suggest that they will provide a solid performance. All in all, Friday at White Oak Shores promises a pleasant day of bluegrass with perhaps some surprises for folks who aren’t familiar with these bands.

Because I haven’t been to this festival before and can only assess bands in terms of their web presence, some bands in the lineup are totally unknown to me. This doesn’t mean, however, that they won’t be worth listening to. Wherever we go we are surprised by the quality of bands that seem to pop up from the local soil. North Carolina provides more than its share of excellent local and regional bands so groups like The Grassy Creek Band, Mac and Tammy McRoy, and The Jeff Huffman Band can offer a great deal to someone who loves bluegrass and isn’t necessarily limited to seeing and hearing headliners. I have made no effort to provide even minimal profiles as I can’t find an Internet presence for these bands to inform my opinion.

Sweet Potato Pie , which opens Saturday’s event, is an all girl band (Now I know about being PC and actually considered calling this a female band or an all women band or something else but chose to stick with the convention.) They play regional and local events in North Carolina, calling their music “Sweetgrass.” The Boys from Carolina Bluegrass Band is another experienced band whose performance will no doubt be satisfying. Another North Carolina is Roby Huffman & the Bluegrass Cutups. Marshall Stephenson is a local radio personality who has been promoting bluegrass in eastern North Carolina for many years. The band’s name, The Bluegrass Train takes the name of Stephenson’s radio show. According to an article in the News & Observer, where Stephenson was named Tarheel of the Week, the show is reminiscent of bluegrass shows harkening back to the early days of bluegrass festivals in the 1960’s. 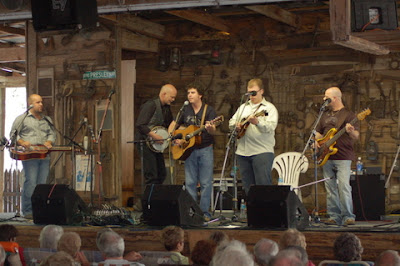 All this stands as a prelude to the two national headline bands which appear at White Oak Shores on Saturday. Despite too frequent turnovers in its membership, The Lonesone River Band is simply one of the best touring bands to be heard. Lead by Sammy Shelor, one of t

he premier banjo players in the country, LRB appears from California to New England and is one of the hardest working bands on tour. The return of Brandon Rickman and the addition of Matt Leadbetter as well as Andy Ball on mandolin and Mike Anglin on bass may become the best LRB band ever. Shelor brings his amazing banjo versatility and personal magnetism along with a mature sensibility which adds depth and thoughtfulness to their music. This is a band calling fans to travel to wherever they appear. 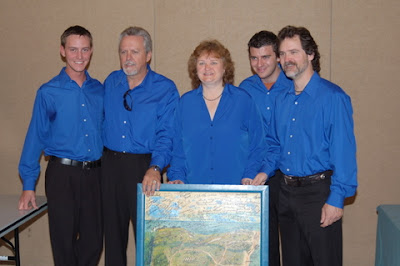 Lorraine Jordan and Carolina Road continue to improve with each new change in their personnel. (Disclosure – a number of my photographs appear on their web site, and Irene and I have developed something of a personal relationship with this band.) The addition of s 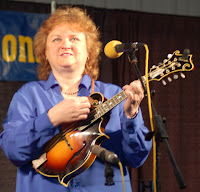 inger/guitarist Jerry Butler almost a year ago has warmed this band up, added humor, and helped Lorraine to focus her skill and leadership of the band. In their recent CD and band appearances, Lorraine has sung tenor to Jerry’s lead most effectively. Youngsters Josh Goforth, a first rate fiddler, and Josh Meade on bass bring youthful enthusiasm and a progressive strain to this essentially traditional band, while Benny Greene brings experience and seasoning. This band has entered a mature phase and is establishing its national profile through extensive travel.

The White Oak Shores Bluegrass Festival promises to offer interesting music in a lovely setting. More information about tickets and camping can be found here.