The Next Stage - Audience 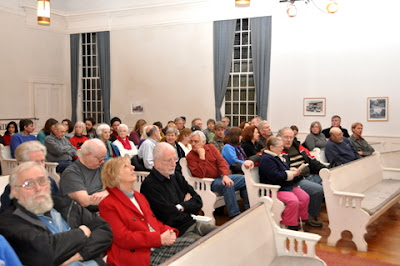 Sadly, the Community Church in Putney, VT is no longer an active United Church of Christ congregation.  After over 230 years in the bucolic Vermont town of Putney, the church had to cease operation. The building however is a gem, and has been taken over by a community group headed  by Barry Stockwell and re-established the church as Next Stage, a site for cultural and social gatherings much needed in Putney. On Saturday night we went to see Hot Mustard open for national band The Dixie Bee Liners. It was a happy, music-filled night.
Barry Stockwell - Promoter 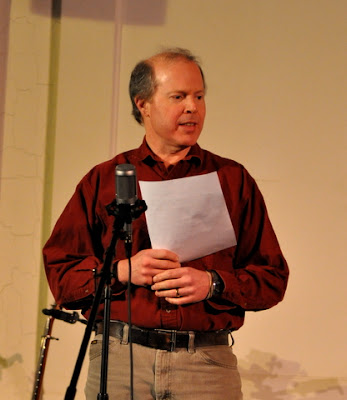 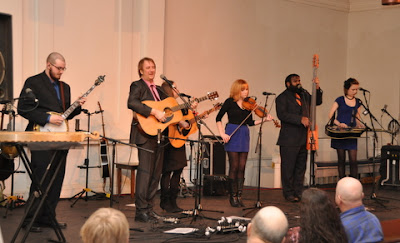 The Dixie Bee Liners, formed about eight years ago, have developed a sound combining traditional forms and sounds with creative innovation and quite contemporary lyrics.  The result is a pleasing mix of the old and the new, often unfamiliar settings for familiar lyrics and sometimes just powerful renderings of traditional tunes like Cherokee Shuffle.  The combination makes for a lively and entertaining evening. The group is particularly well-suited for the kind of intimate venue represented by rooms like Next Stage.
Buddy Woodward & Brandi Hart 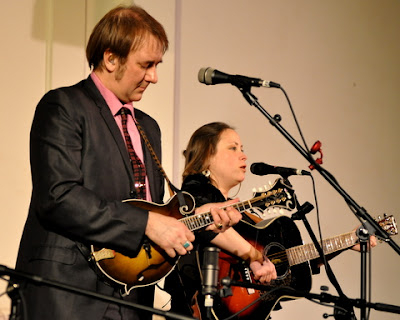 The Bee Liners have been through a major personnel change occurring during the last three months of 2010. Out of the changes Brandi Hart and Buddy Woodward have refashioned their band and strengthened it, coming up with a mix of voices and instrumental qualities providing them with increased range and versatility.  The band now has five able singers differing in style yet capable of wonderful musical blending, mixing, and matching.  Their repertoire is currently heavy on songs from their latest CD, a concept album called "Susanville," based on the idea that every vehicle contains a story waiting to be told.  It's a good concept that provides opportunities for truck songs, blues, up tempo explorations, and any subject matter the band wishes to explore.
Sav Sankaran 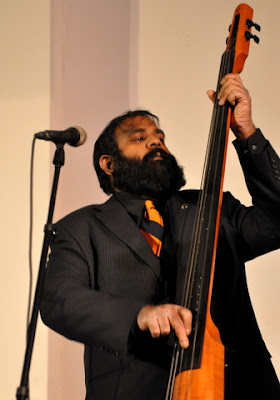 Sav Sankaran, a graduate of Gettysburg College and a Ph.D. student at Penn State University brings great breadth and depth to the band, which effectively takes advantage of his offerings.  To start with, Sav's a fine bass player combining the solid supportive beat bluegrass bassists are expected to provide with wonderful jazzy, bluesy breaks that bring audiences to their feet.  His tenor singing,  excellent song writing, and pleasant stage personality make him a complete package in this band. 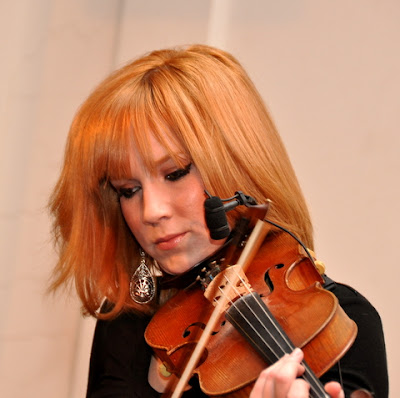 Sara Needham, a recent graduate of  East Tennessee State University, only joined The Dixie Bee Liners around the first of the year.  Nevertheless, her strong fiddle play and husky, sometimes even sultry blues vocals singing both lead and harmonies that fit perfectly with Brandi's leads add a new dimension to this band's sound.
Zach Mongan 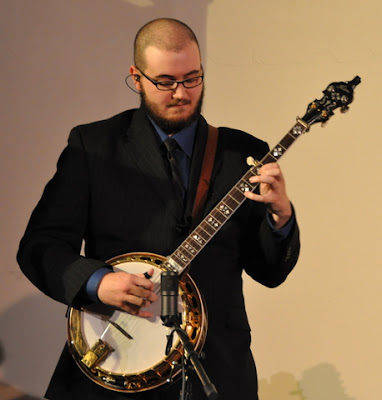 Zach Mongan is a senior at East Tennessee State University in their well-known bluegrass program.  A quiet but effective presence anchoring the left side of the stage, Zach's banjo play ranges from traditional bluegrass to a complementary funky sound that blends into the innovative stories The Bee Liners weave.  The music of the Bee Liners is neither easy nor simple, and Zach's play fits very well.
Leah Needham 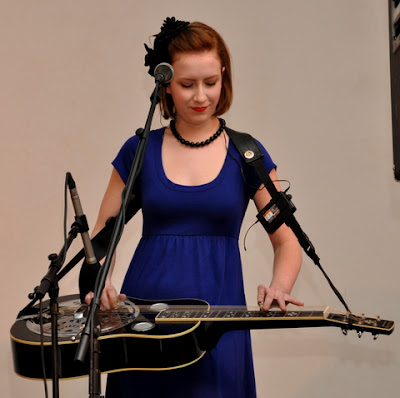 Leah Needham adds another woman to the growing list of excellent female Dobro artists.  Leah, who's Sara's sister, is also a student at ETSU and plays in their well-know Pride Band.  She will be joining The Bee Liners for selected dates throughout the year.  Not many bands carry both a fiddle and a Dobro, but the combination works to create a fuller band sound with enormous potential for variety, of which Hart and Woodward's compositions and arrangements take full advantage. Leah has a fine, nuanced solo voice and contributes first-rate harmonies, too.
Buddy Woodward 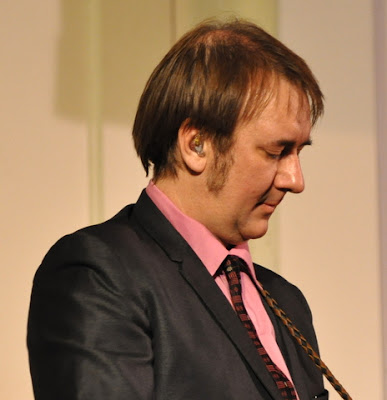 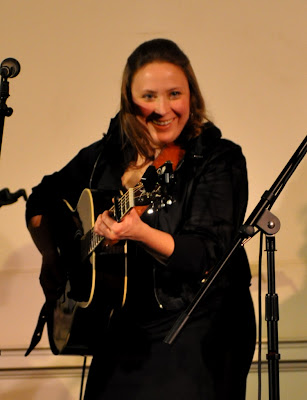 The creative and personal force powering this band comes from the combination formed by Buddy Woodward and Brandi Hart when, by happenstance, they each moved to New York to pursue careers in bluegrass and roots music.   They met, and their musical, as well as personal, sensibilities made the kind of match that inevitably led to forming a band and a household.  They soon moved to southwest Virginia and formed a relationship with the Crooked Road, which they continue to promote in their performances. While describing  themselves as a bluegrass band, their music represents a fusion of Americana, roots, blues, rock and more brought together in an always interesting fusion of styles and influences.  They have surrounded themselves with an ensemble that complements their strengths to create a large and encompassing sound. The audience at Putney rewarded The Dixie Bee Liners with strong applause and a standing ovation that brought them back for a very effective encore of "Working on a Building."
Dixie Bee Liners - Cherokee Shuffle
The Dixie Bee Liners present creative and thoughtful alternative approaches to bluegrass, roots, Americana, and country music in an engaging package well-suited to small settings as well as festivals.  Their intricate arrangements and story-based lyrics demand attention from their audience, challenging those who hear them to listen with care and thoughtfulness while still allowing themselves to luxuriate in the Bee Liners rich and encompassing vibe.
Hot Mustard 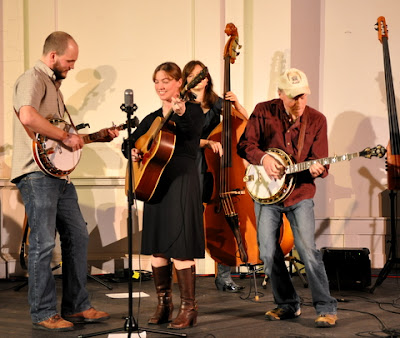 Hot Mustard, a relatively new band based in Putney, VT and Rindge, NH, opened for the Dixie Bee Liners with a too brief set.  Growing from Vermont Council on the Arts grant allowing Bruce Stockwell and Bill Jubett to work on dual banjo bluegrass stylings, Hot Mustard first performed as a band when they won the Jenny Brook Bluegrass Festival band competition in 2010.  Since then they have spread their wings, performing in local and regional venues.  They'll be making a main stage performance at the Joe Val Bluegrass Festival in Framingham, MA on Friday as well as at Jenny Brook and Strawberry Park this summer. You can find their schedule here.   The combination of Bruce and Bill's intricate banjo work, April Hobart's fine bluegrass voice, and Kelly Stockwell's strong bass makes for excellent traditional bluegrass with something more.  In the video below, listen especially for Bruce and Bill's Reno style single string picking on "Hold Whatcha Got."
Hot Mustard - Hold Whatcha Got
April Hobart 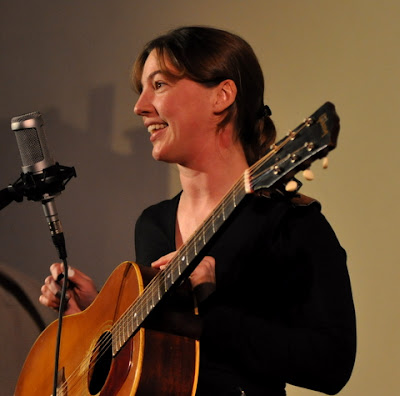 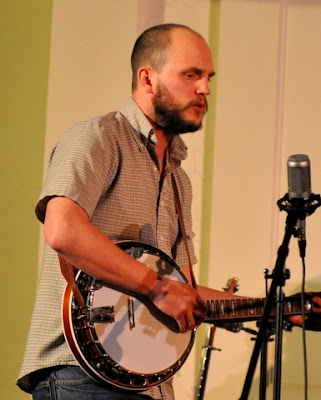 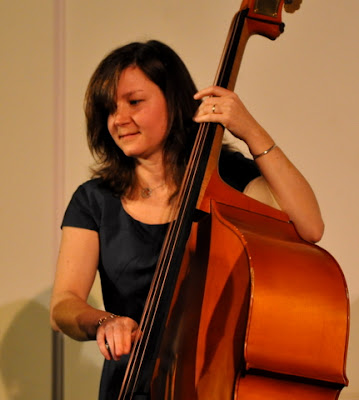 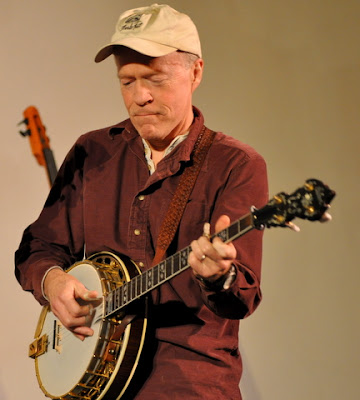 All together, The Next Stage presented a varied and highly enjoyable concert in a new venue that will become increasingly important for bluegrass fans in the Vermont, New Hampshire, and northwestern Massachusetts region.  By choosing to vary the range of Americana and acoustic music he presents there, promoter Barry Stockwell (Twighlight Music) will please and expand a variety of audience tastes while introducing them to music they might not otherwise have had an opportunity to experience live. The Next Stage Arts Project is overseeing the renovation of this delightful old church. Keep an eye on this venue!
Posted by Ted Lehmann at 5:20 AM