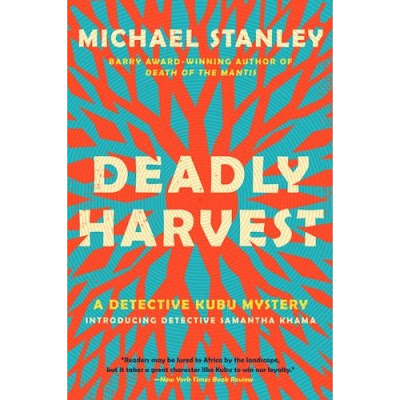 Deadly Harvest (Harper Collins, 2013, 496 pages, Paperbound, $14.99) by Michael Stanley, a pen name for South African authors Michael Sears and Stanley Trollip, is the fourth in the fine series of detetective fiction focued on Detective David “Kubu” Bengu, Assistant Superintendent in the Criminal Investigation Division of the Botswana Police Department. The story is a gripping and grisly tale of murder and political corruption within the conflict between traditional and contemporary lifestyles in Botswana, an emerging African nation on the northern border of South Africa. The current novel introduces a new continuing character, Samantha Khama, a young woman detective who seeks to break through the entrenched male dominance in the police department. Samantha adds a new dimension to the Detective Kubu series as she becomes his protegè.

Set in Botswana, a largely rural country dominated by the Kalahari desert, which is a rapidly modernizing country just north of South Africa enriched by enourmous diamond deposits, the story follows Kubu, hippopotomous in Setswana, as he seeks to solve the possible abduction of several young girls as well as the murder of Bill Muromo, a populist candidate for the national parliament in a local by election. It also seems that the children are being abducted to provde body parts for a witch doctor to make muti, evil magic potions to strengthem various characteristics people wish to enhance. When a gourd of muti is found in Bill Muromo's desk after his assassination, the plot takes strange twists suggesting a relationship between the political and the magical.

In the tradition of Tony Hillerman, who through a series of eighteen detective novels featuring his characters Joe Leaphorn and Jim Chee, depicted the struggles between traditional Navajo life in the American southwest and modern incursions on it, Stanley's characters bridge the gulf between traditional tribal life and modern medical and scientific knowledge. While the writing duo who call themselves Michael Stanley are not as effective as Hillerman in evoking the sound and feel of traditional life, perhaps because they are less immersed in it than Hillerman was, their stories are, nevertheless, effective portraits of an emerging, modern nation in Africa and the power still maintained by traditional magical arts, both benign and evil. Detective Kubu, a man of huge appetites to go with his gross body, is both smart and modern while understanding traditional viewpoints because his aging father is a traditional healer and his village childhood. Various other characters in Deadly Harvest are more or less modern in their outlook. Some scoff at the traditional arts while both fearing and using them for their own purposes. Others understand the psychological aspects making such magic effective, while sometimes experiencing atavistic feelings that suggest their fear that such magic is real. As Kubu's new colleague, Samantha, learns the ropes and becomes a more effective detective, she discovers that the veneer of her higher education may not be as thick as she thinks it is. As she learns, the hard edged chip on her shoulder eases and she becomes a better investigator.

The character of David “Kubu” Bengu is sufficiently complex to be interesting. His large size and sophisticated pallette, particularly his taste for European food and fine wines, establishes his modernity. He solves his crimes through careful analysis and is always reluctant to jump to conclusions, finding increasingly difficult to piece togther strands which he solves more by thoughtfulness than by physical prowess. Working in a political system, he remains ambitious while unwilling to trample others in his desire to advance. He's a loving husband, father, and son as well as a good listener who gets the most from his subordinates while making his supervisors better policemen, too. He doesn't “wow” a reader with his resourcefulness and quick action. Rather, he earns respect and affection. qualities I think may draw readers to him through many further novels.

The Kubu series by Michael Stanley also serves as a primer for western people unfamiliar with Africa and Africans about the advances and difficulties of moving into the modern world. Botswana is pictured as an emerging nation practicing democracy while at the same time saddled with the remains of an older culture based on witchcraft and mystery growing from the animism that undergirded much of religion throughout the world and lasted longer in Africa than in other areas. By attributing desireable characteristics to imbibing their essence, various elements, including human consumption become necessary for health, wealth, professional advancement, and happiness in the eyes of the less educated, but holding subconscious influence on even those who have consciously given up superstition. The clash of older, more traditional societies with an emerging consciousness of science and human worth underly both of the Kubu mysteries I've reviewed. 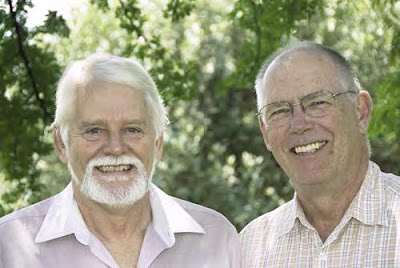 Michael Stanley is the writing team of Michael Sears and Stanley Trollip. Both are retired professors who have worked in academia and business. Sears is a mathematician, specializing in geological remote sensing. Trollip is an educational psychologist, specializing in the application of computers to teaching and learning, and a pilot. They were both born in South Africa, although much of their professional lives have been spent in the U.S.


Michael Stanley (South African authors Michael Sears and Stanley Trollip) has written an enjoyable detective novel that teaches as it entertains, without challenging the reader excessively. What more could a reader ask for? Deadly Havest by Michael Stanley (Harper Collins, 2013 496 Pages in trade paperback) is an excellent diversion as well as a thought provoking read. I read it as a digital download from the publisher on my Kindle through Edelweiss.
Posted by Ted Lehmann at 9:00 AM