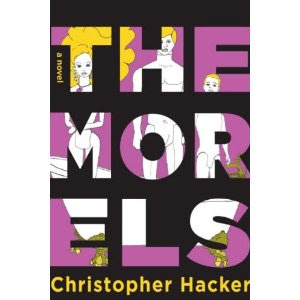 The Morels by Christopher Hacker (SoHo Press, 368 Pages, $29.95) is a sometimes difficult, often brilliant, and disturbing novel which examines the role of art and the artist within the context of a confused and difficult family during the period from the counter culture days of the 1960's to the near present. Narrated by an unnamed observer/friend of the Morel family, it follows the central character Arthur Morel as he publishes a second novel he calls the "The Morels" creating a constant confusion and strain between the real writer Arthur Morel and the Arthur Morel character who becomes mired in almost unspeakable behavior which rips his family life to shreds.

While in the process of assembling an independent film, the narrator meets a person in the hallway of his building who greets him as a long lost friend and gives him a copy of his new book. As the narrator looks at the name of the book, the name and his experience with the author, Arthur Morel, comes flooding back for him. He had attended the Manhattan Conservatory of Music with Arthur, where Arthur was a musician of unparalleled brilliance, creativity, and artistic courage. As their graduation recital arrives, Arthur expresses his creativity in such a way it leads to his expulsion from conservatory and the two lose contact. With the publication of Arthur's second novel and its catostrophic outcomes, the film team decides to create a documentary film about Arthur, who sends them to meet his parents in their once Hippy home carriage house on the lower east side if Manhattan. The revelations garnered there help build a portrait of the dysfunctional family that created what becomes Arthur Morell.

This rather complex novel functions on several different levels, time frames, and perspectives. At one level it draws the reader into the complex, confused, and brilliant mind of Arthur Morel working out his life and understandings through first his music and then his writing while seeking to create a home and family for himself to find a sense of normalcy. At another level the novel explores the nature of art and the artist in contemporary society. Morel sees the role of the artist to be taking risks, stepping out and risking failure in front of everyone. He asks whether every performance deserves an ovation and seeks to create performances that provokes in the same fashion Stravinsky's ballet music for Rite of Spring did at the Paris Opera House in 1913, causing riots and fist fights. Similarly, his search for “truth” in novel writing risks hurting others, which Art sees as the source of his fiction. “I'm looking for good, for true, for dangerous,” he says. He risks, at the core of this novel, having readers mistake his underlying truths for factual occurances, increasing that risk by naming the characters of his second novel after himself and his family and calling it “The Morels.” It's also as easy to confuse his family name with the word “morals” as it is to confuse his given name “Art” with art.

The book begins to emerge as a meditation on art in its many forms – music, novel, film. The novel is a solitary art that only emerges as it is consumed. Art may also be seen as the Arthur of the round table, seeking to save society, while his wife Penelope as Odysseus noble wife remaining true while he goes off to wage war. The writer examines the reactions of the people he knows, loves, and hurts as well as the way that imagination, satisfied by writing as well as reading no longer needs to behave in the anti-social ways the id can lead us. Ideas can hurt, do damage, or destroy relationships. Writing fiction is designed to build a believable world where the unbelievable, the fantastic, the evil can take place in a fashion that can be experienced seemingly without danger. But what happens when the reader understands the revelations as literal truth? “Music, once written down, was merely a description of itself, its true purpose a set of instructions.” Books are merely stage directions, not actions, placing writing, too, as a form of performance. So art fails, whether in writing, painting, or music because as soon as it's rendered it can only hint at what the artist imagined. Performance becomes a description of a description. These are the sorts of questions Hacker raises throughout this novel. But readers should not allow the thoughts and rationalizations of a tortured artist to distract from the power of the story being told. This is a gripping novel. 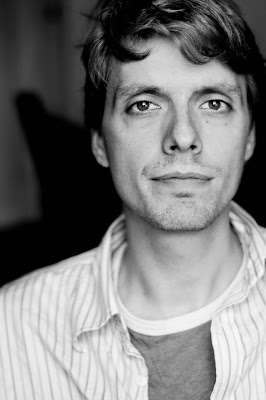 The Morels is a novel not for the faint of heart, the weak of stomach,or those who prefer to stay comfortable in their own smug self righteousness. It deals with difficult ideas in explicit language, challenging our conceptions of truth vs. fiction, the nature of facts, the influence of those around us for good or evil, and the nature of art in a variety of media. Christopher Hacker has written a haunting, thought provoking, and often difficult to read story. Christopher Hacker received a BA in Music Composition from the University of Michigan and an MFA from Columbia University. His stories have appeared in Quarterly West and The Rake, and he was a finalist for a Pushcart Prize in 2009. He currently lives in Washington, D.C. with his wife. This is his first novel.

The Morels by Christopher Hacker (Soho Press, 368 pages, $25.95 list price) is available from the publisher or all the usual sources. It was provided to me by the publisher through Edelweiss.
Posted by Ted Lehmann at 9:00 AM