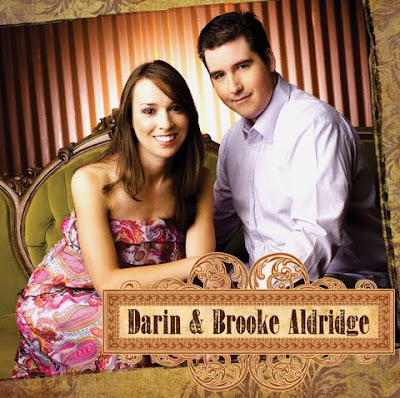 Darin & Brooke Aldridge's new self-titled CD released by Crossroads Records captures the emerging new strength of both this duo and the very strong band they've put together to showcase their remarkable breadth and musical versatility. Following their earlier all-Gospel CD “I'll Go With You" which did very well in both the all gospel circuit and among bluegrass enthusiasts, this CD, produced by Nashville veteran Jerry Salley, showcases a broader sensibility without ever compromising the faith and values that have characterized their earlier work and performance schedule. Darin Aldridge grew up in bluegrass music, touring with Charley Waller and the Country Gentlemen for several years towards the end of that great group's storied careeer. He has also been a central member of The Circuit Riders. Brooke Justice Aldridge grew up singing in church, as well as country music contests near her home in the Smokey Mountains. The blend of Brooke's powerful voice with Darin's pitch perfect tenor harmonies and wonderful guitar and mandolin solo work has proven to be irresistable to those who've heard them. Married a little over a year, the two have made a commitment to present bluegrass, gospel, and country music without ever indulging in the cheatin', drinkin', and killin' parts of the music. In performance and in their lives, Darin and Brooke testify to the depth of their faith and the power of their music to move and entertain. 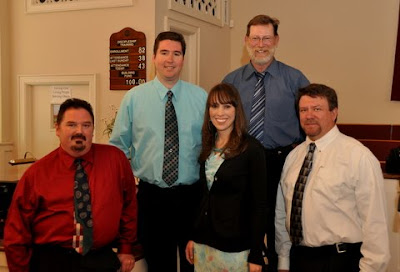 The new CD contains a dozen songs, mostly new and some written specifically for this effort. Backed by their touring band of Eddie Biggerstaff on bass, Chris Bryant on banjo, and Perry Woodie on Dobro the CD also features guest performers in strategic and important places. Tim Crouch adds depth and melody on fiddle, while Rob Ickes effectively substitutes for Woodie on a couple of songs. Jerry Salley contributes harmony vocals as does Greg Luck, who also plays fiddle on one cut. Generally, however, this CD benefits from the tightness and familiarity of a touring band recording together. The band has been assembled to support and complement the voices of these two young and talented musicans. It accomplishes its goal in high style. Brooke Justice Aldridge has a rich and clear voice which punches through powerfully, but without evident effort. Darin's voice on harmony provides a nearly perfect complement, while his solo work is reminiscent of his hero and friend, Vince Gill. The entire album showcases Darin & Brooke in a diversified set of songs showing the breadth of their range and the depth of their personal and faith commitment.


The CD opens with a rousing love song “I Thought I'd See It All” (Burton Collins/Lisa Shaffer) which sets the tone and shape for the album. You showed me love hotter than the Mojave Dessert, Sweeter than the sweet Georgia Peach/Wilder than mustangs in Montana/More beautiful than the Smokey Mountains in the Fall/ Until then, I thought I'd seen it all. With Darin and Jerry Salley contributing harmony vocals, Brooke's strong and supple voice rings out strong and true. Crouch's fiddle sings out the beauty of the mountains, while Darin is lively on both mandolin and guitar.


“The Sweetest Waste of Time” by young singer/songwriters Kasey Chambers and Shane Nicholson from Australia presents Darin &; Brooke's harmonies in a quieter and more leisurely song. The song has a country lilt to it. If you don't see me, caught in your wire/ If you don't hear me, outside your door/If all this waiting, just leaves me wanting/You still would be, the sweetest waste of time. In a slow and melodic call and response, the lead moves back and forth between the two lovers longing for each other, but still wondering about the future of their relationship. 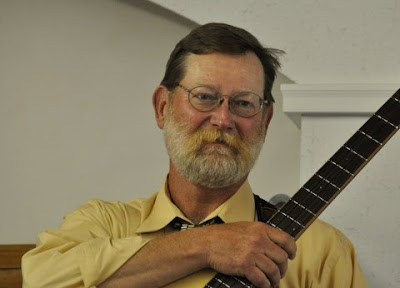 “Corn” celebrates the glories of the rural lifestyle and the farm as providing the anchor values for a life of love and productivity together. Written by Lisa Shaffer and Bill Whyte, the song creates a sense of nostalgia, particularly with the image of the field full of corn. The song goes, Two rocking chairs on our front porch, That's overlooking green hills and a faded red barn/Inside this old farmhouse there's an old wood stove/ and on a cold night, you can bet it'll keep us good and warm/ Got a big bay window with a view full of stars, and a field full of corn. No one listening to this song could resist the urge to grow old together in this setting as one of these people. The song stays simple and is never hoked up with over production, keeping it well anchored as a bluegrass song while still having many echoes of the best of contemporary country music.


Tom T. and Dixie Hall know how to build a song better than almost anyone. “Let's Not Go There” stands as good advice to any couple growing into their love for each other and seeking not to create the wounds that divide and separate. The first verse goes There was a time you had someone, and I had someone too, That was way before there ever was a me and you./ The past is all behind us now, the future's our to share/ There's nothing back there for us, Let's not go there. Darin and Brooke's voices trade the melody back and forth, joining together for the refrain. The sense that each has a past, but it's not worth allowing history to interfere with the fresh and bright future of the singers' love pervades the song while the tune has a sound of nostalgia underlying it. The song suggests the complexity and risk of new and rich relationships. 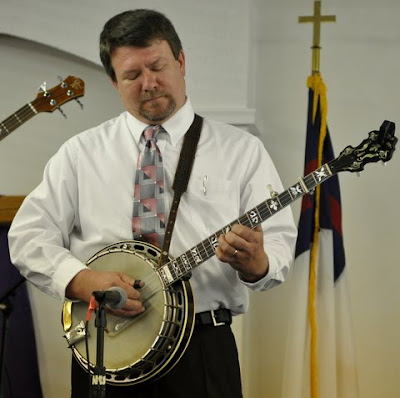 “Something Out of Nothing” is almost jolting as it follows “Let's Not Go There.” The song gives Brooke an opportunity to demonstrate the breadth of emotion her voice is capable of achieving. I can't make somethin' out of nothin'/ I can't be high when I'm so low./I can't move the mountain, and I never walked on water/Can't change the way the river flows, and I can't make a dead love grow. The song opens with a harsh banjo solo that provides the sense of loss and desperation Brooke develops in the Brittany Bailey tune.


Darin Aldridge wrote “Hero of Mine” with Vince Gill in mind. Everybody needs a hero, someone that will help you carry on/When you find your strength is gone, That's when your hero comes along. While the song focuses on the musical inspiration which gives the singer strength and knowledge, the song rises above a single inspiration, suggesting the need for understanding and support from a larger source. This solo sung by Darin with Brooke and Jerry singing harmony is simple and straightforward, allowing Darin's Vince Gill-like light tenor voice and elegant guitar playing to carry the song forward. 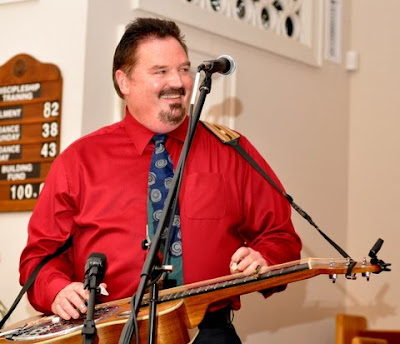 “I'm Building on the Rock of Ages” is an acapella gospel quartet written by Steve Watts and Jerry Salley. With Salley on baritone and Greg Luck singing the bass line, with Darin's tenor trading leads with Brooke's alto, the song, in its quiet dignity captures the deep faith that characterizes a major portion of Brooke and Darin's work.


The repeated refrain in “It Moves Me” ...It moo-oo-oo-ooves me...suggests the motion of the water along the gulf coast where the song is set. The image of water as a source of life and inspiration is clear and strong, suggesting the connection between the individual and the eternal. Jerry Salley and Donna Ulisse have written a song that portrays the power of nature and music to speak directly to an individual's spirit and make connections to personal relationships. There's a place down on the Gulf coast, a stretch of beach where I can swear I see God's hand/Sometimes I sit for hours and watch the water dancin' cross the snow white sand/That shoreline's like a shoulder when I need it/It's more than just an ocean stirring my emotions when I see it. It moves me. Chris Bryant's banjo arpeggios capture the rippling waters and the motion in the song. “Remind Me Again” is a Jerry Salley/Tammi Kidd entry, a love song that continues the theme of found, held, and remembered love that pervades the CD. 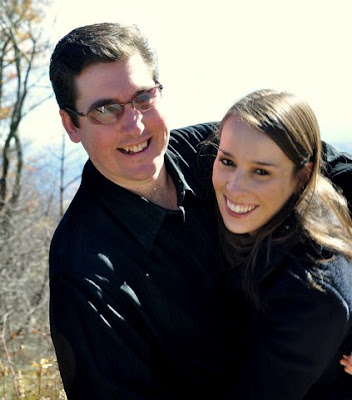 Gospel songs dominate the second half of the CD. “The Light from Heaven” is an up-beat song by Tom Hayes out of the southern gospel tradition that's been a regular feature of Darin and Brooke's performances in churches. Its lilting rhythm has the power to draw congregations to their feet. “Moses” by Dennis K. Duff tells the story of Moses in a tuneful and compelling fashion. The repetition of Moses' name captures the sense of God's calling, the years in the desert, and the demand to “Let my people go.” Duff, a winner in the country music category in the Chris Austin Songwriting contest at Merlefest in 2009, also wrote “The Last Thing on His Mind” a gospel song which concludes the CD. This moving song pictures Jesus during the last few hours of his life as he suffers the unimaginable pain of the crucifiction. The song asks Who can know his pain or understand the price he paid, so you and I can live under God's amazing grace? Brooke captures the pain, sorrow, and loss of the moment in her powerful and soulful voice. 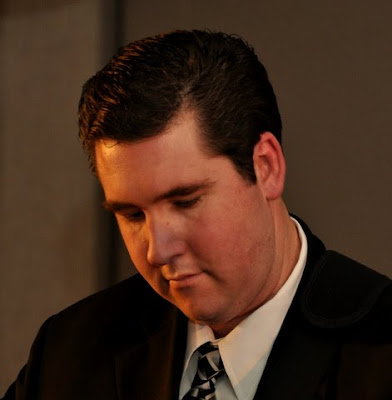 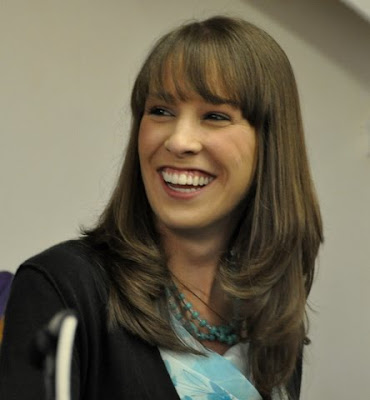 Darin and Brooke Aldridge view their lives and music as an intertwined ministry expressing their faith through their talent. On any Sunday, they're as likely to be found in a tiny storefront church testifying their faith through song to thirty-five believers as they are to be a part of the service at a large and active congregation. This new CD signifies a move toward broader opportunities without giving a single hint that they are abandoning their faithful journey. The current project finds the seams between bluegrass and country as well as secular and gospel music. Jerry Salley's able hand is evident throughout the fine production, and often undervalued design elements are superb. This is a package for music fans! The CD is available from Crossroads Records or from Darrin and Brooke's web site as well as for on-line download. It is carefully structured and deserves to be purchased in its complete form.


Look for a detailed announcement of the release party for this CD to be held in Shelby, NC on January 22 within a few days.