YeeHaw Junction Bluegrass Festival will open its sixteenth season on Thursday, January 28th at 4:00 PM and run until Sunday, January 31st. This traditional bluegrass festival will feature national, regional, and local bands in four days of professional music, field picking, instrument workshops, reunions, and good times under new management. Victor and Malieka Hall and Keith and Darlene Bass have assumed ownership of this well-established festival due to the illness of Steve Ditmann, long time promoter of the event. They have instituted some needed changes while retaining the feel for the site and the people who have continued to come there over the years.  For 2010 there will be a more electric hookups for campers supplied by a permanent installation with 30 amp connections., while the generators have been removed.  Power to the stage has been increased, permitting better sound and light. A twenty-four foot bathroom trailer has been added to the porta-potties scattered around the grounds, a feature that will delight many.  The size of the tent has been increased.  The good selection of vendors has been continued. 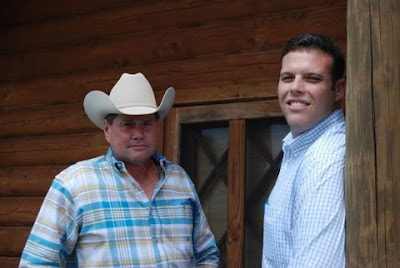 Photo compliments of Darlene Bass
Tickets to YeeHaw Junction are still on sale and can be purchased here.  The Hall - Bass team has managed to maintain low ticket prices despite the pressures of the economy.  The early bird period is passed, but tickets can be purchased on line or at the gate for $55.00 for the whole festival or a variety of day rates depending on the day.  Electric hookups are sold out, but the site is large and flat, providing plenty of room for all who wish to attend.  A variety of hotel accommodations in nearby Okeechobee (33 miles) and Vero Beach (32 miles) are suggested in the Festival Brochure (pdf) .  The "World Famous Desert Inn" has a few rooms.  YeeHaw Junction is truly that.  Located at the junction of the Florida Turnpike (Fl 91) and route 60, YeeHaw Junction offers a couple of gas stations and very limited local amenities.  The site is a pasture that will have been recently cleared of cattle and mown.  It's a charming spot, best suited for campers who come prepared to stay the full four days. The festival site can't be missed. 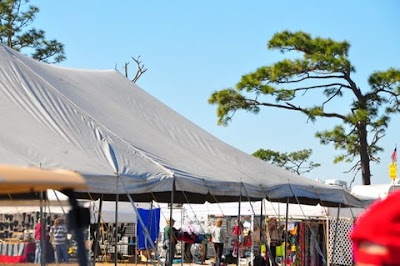 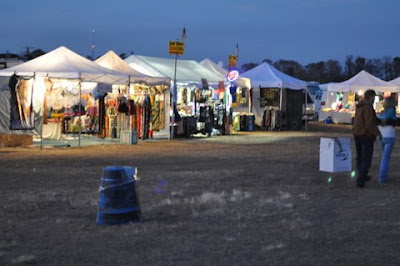 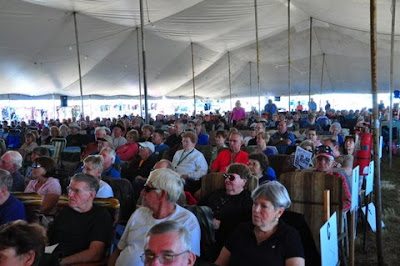 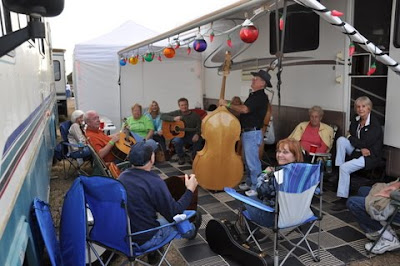 This year's lineup is a strong mixture of national, regional, and local bands, some of which have been YeeHaw Junction favorites for many years.  The Bluegrass Brothers, a high energy traditional family bluegrass band from Virginia, will be returning this year after their popular and successfull appearance last year.  Their unique version of "Grandfather's Clock" is especially fun-filled. 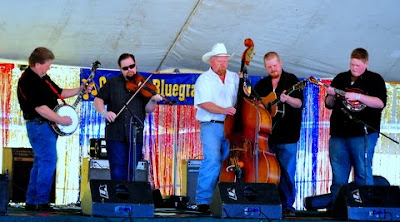 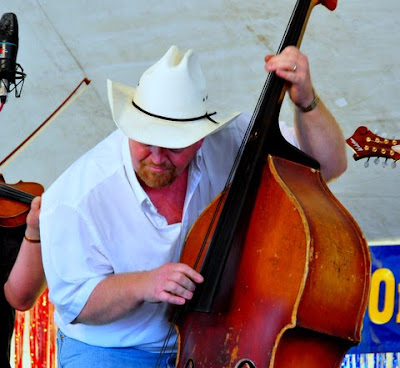 Nothin' Fancy has been a fixture at YeeHaw Junction for some years.  Led by Mike Andes, whose solid baritone voice is an ideal vehicle for his own songs as well as Country Gentlemen covers, this band has been remarkably stable over the years.  Fiddler Chris Sexton contributes his classically trained violin play and his impish musical humor to create part of the band's signature combination of music and entertainment.  Banjo picker Mitchell Davis is always funny as he strives to maintain his perpetually injured dignity. 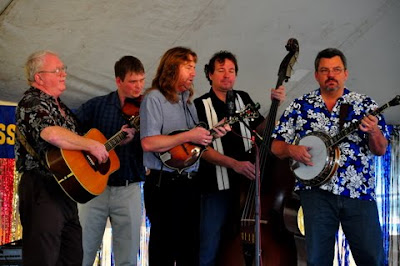 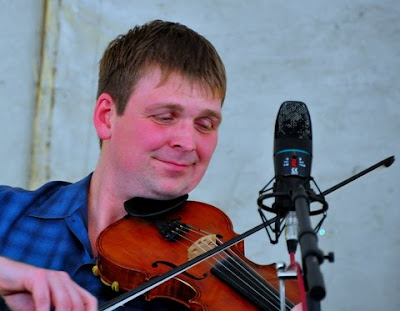 Valerie Smith & Liberty Pike are a vastly entertaining band.  Recent changes have strengthened it and the addition of Ernie Evans on guitar and banjo has provided added versatility and helpful road managerial strength.  Becky Buller  (singer/songwriter, fiddler, banjoist, and character) is a fine foil and complement to Val Smith's singing, which carries bluegrasss, pop, and Broadway influences.  Health issues that have hurt her performances over the past few years have been resolved, strengthening her show.  Rebecca Long has been added at bass, and I'm looking forward to seeing her work.  This hard working, energetic band always gives excellent value. 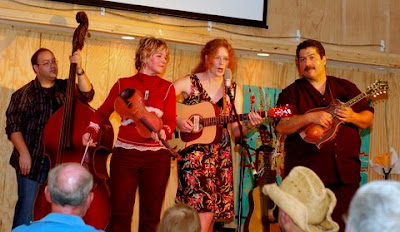 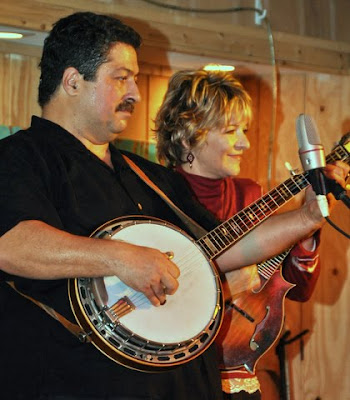 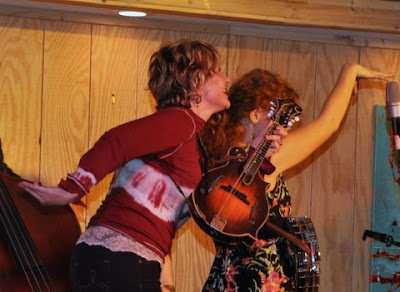 The Larry Gillis Band has been strengthened by recent stability and the addition of talented mandolinist Evan Rose with Alex Leach on guitar taking over some of the emcee work. The Gillis band is best know for Larry's hard driving and fast picking Georgia banjo style.  He also has continued to play some of the most dynamic clawhammer banjo around. 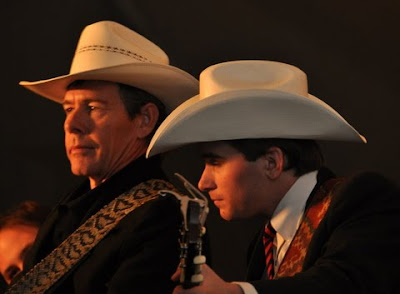 We first saw The Wilson Family Band at the, sadly, discontinued Spirit of Suwanee Bluegrass Festival at Live Oak about four years ago. Despite my suspicions about family bands, we were captivated by young Katie Wilson on the fiddle as well as her older brother Clint picking banjo.  Gradually, over the next year or so, the Wilsons became close enough friends that we've been privileged to be welcomed into their home, where we discovered a family growing together through music in ways any family would envy. Robert and Melissa Wilson have insisted on allowing their children to grow up pretty much untouched and immune to the dangers of celebrity.  Oh, and they sing, too!

Rehearsal on the Wilson Bus 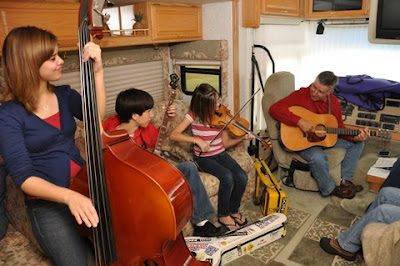 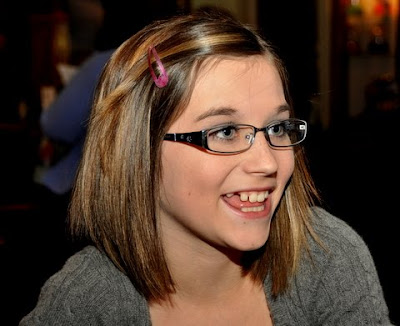 Kalyn Hall (Here's where this gets complicated) 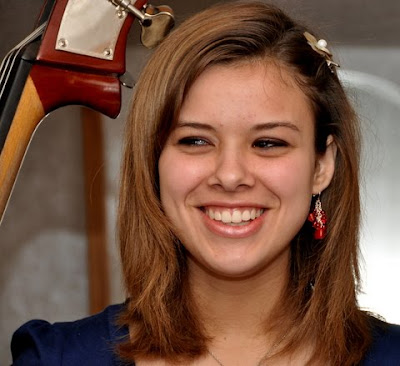 Tomorrow's News is the host band of this festival, another family band that in its composition and commitment to faith, growth, and music stands as an example of good parenting through music and love. The band consists of Victor Hall and Keith Bass, promoters of YeeHaw Junction in addition to the Tomorrow's News Festival to be held at Craig's RV Park in March, and Victor's son Blake and daughter Kalyn, who seems to be attached in some way to the Wilson family, also. 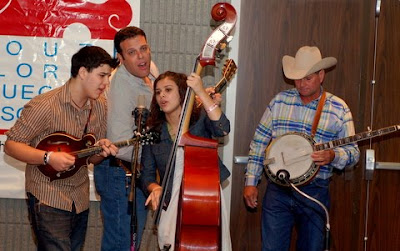 The Bluegrass Parlor Band was founded by Tom Henderson over twenty years ago as an outreach of the well known youth education program at his store The Bluegrass Parlor.  The parlor has since closed, but the band, under the leadership of Jeff Jones has continued to find and develop young Florida talent.   Musicians like fiddler Aubrey Haynie and emerging banjo virtuoso Corey Walker are Parlor alumni. Currently, Cory's two younger brothers, Jarrod on mandolin and Tyler on guitar are mainstays along with Austin Wilder singing and playing guitar. Jeff Jones has returned on banjo and lead vocals. Jeff White is on bass. Hard Ryde is a Canadian Band well known in Ontario and along the border in New York and New England, where the reports have been strong. They'll be in Florida as a result of having sailed on the Bell Buckle Cruise headlined by Valerie Smith.  Florida festivals can benefit by booking bands before embarking or after returning from the various cruises originating in the state. Men of the Week is a Missouri-based bluegrass band, which has been nominated for six midwest regional SPBGMA awards, including traditional band of the year.

Two Florida bands fill out the YeeHaw Junction lineup. Hwy 41 will be on the stage for sets on three days.  While this is a new band I haven't heard, I am familiar with the exceptional flat picking skills of Robert Feathers, who often plays with James King when he's in Florida.  This should be a hard driving, traditional bluegrass band.  James Rogers & Blue Cypress will appear on Sunday. Mike and Mary Robinson will be holding their tradtional Bluegrass Gospel Sing and Jam on Sunday morning. In addition, Mike will be sharing emcee duties with Evan Carl. 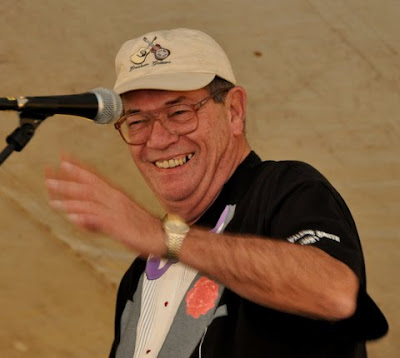 YeeHaw Junction's new management is hitting the ground running.  Putting together a bluegrass festival requires organizational skill, a knowledge of the music, and a willingness to take on substantial financial risk.  One can only wish them well as they move into this new endeavor.  We'll see you there.