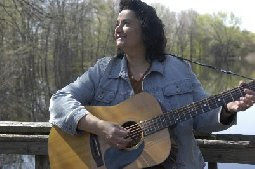 h rock bands and women’s bands during the 1980’s, before pursuing a career in business for a time. Later she returned to her first love bluegrass, country music, folk, and Americana. She appeared at the Falcon Ridge Emerging Artist Showcase in July of 2007. “Feel That Light” is her first recording, a collection of seven songs she wrote and performs. This CD, backed by a good bluegrass band, contains only seven songs, all written by Kenney, and should, perhaps, be viewed more as a demo recording than a full fledged showcase of Dawn’s capability. In it she displays a range of subject matter and her very fine voice in a thoughtfully arranged collection of her own songs.

Hide Away is a domestic song. The singer awakes on Monday morning with her husband beside her, lying in bed together feeling each other’s warmth in the moments before the alarm goes off and they each must face the day ahead

Hide away, hide away,
In this whole big world there’s only just one place 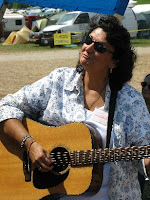 Daily life and all its trouble slips away,
Come and take me in your arms, let’s hide away.

The simple ballad resonates with the security of home and family portrayed in Kenney’s warm, melodious voice. The chores of the day each of us must face are mitigated by the sense of the couple’s looking forward to a “stolen moment still to come.”

Who Shot John Cyrus, a bluegrass murder ballad with a twist provides a solid contrast to the first song.

Who shot John Cyrus with his gun this morning? Who let his dog out the door?
Who relieved this town of half its pain and sorrow? He’s gone and won’t be coming back no more.

The song continues, in the style of murder ballads, to sketch out a series of nasty crimes as well as an assertion of his being rotten to the core “since age eleven.” The singer views the world from her place as a waitress at the local diner, watching the town’s reaction to John Cyrus. Instrumental solos by Rich Stillman on banjo and Phil Bloch on fiddle are effective and showcase this song as belonging to bluegrass. With the line “The women of this town protect their own,” Kenney suggests a feminist tone that without rancor or anger still reflects a clear posture found in many of the songs.

Reach High can be heard as a song of faith, a proto gospel song using the metaphor of a tree in a meadow to stand for nature, the creator, the overarching universal soul.
Feel that light when it shines all around you,
Reach high up into the sky,
Dig deep, plant roots into things that ground you,
Take time; don’t let life pass you by.
Reach High.
In this song, Dawn uses her soaring mid-range voice to capture the majesty and mystery of the tree. Her melody aptly complements her voice and intention. The song inspires as it captures the listeners imagination and spirit. The tree is characterized as a mother figure who embodies home and family as well as strength to cope with the storms of life by helping us to bend and sway with life’s stresses and strains. Some might object to the lack of specific religious reference in this song, but the strong spiritual sense and metaphorical emphasis make it clear to those who want to see it.

A haunting love song, Walls Between Us captures pain of lost communication in a long-term relationship.
So now why must we build walls between us?
Though that only tears us apart?
Can’t you see how my soul is just achin’
To be with you back safe in your heart?

The song fits solidly into the country love song genre of lost love that could be resurrected if he would only reach out. The search for safety and togetherness is palpable in Kenney’s voice.

That’s God Talking speaks of the hypocrisy of organized religion in the face of encountering the eternal in the beauty of nature.
But I look around me, that’s where I find it,
In the glistening of the morning dew,
You hear that bird sing? Now that’s God talking,
And it’s in your eyes, that light in you.

The singer receives this wisdom from her beloved Grandfather, as they walk and talk. Finding the human connection with the woods, the sky, and the earth, he shares his love of life and its beauty with her. As with Reach High, this song communicates a kind of deism more native to New England than some devoted to Bible based gospel songs might find comfortable, nevertheless, this is a lovely song capturing the ranging quest of the human spirit.

Gonna Make Me Fall is another bluegrass song in the “your bad for me, but I love you anyway” mode. The singer speaks of looking into his eyes and knowing that there’s trouble ahead and going down the road anyway, even though she recognizes she’s playing a fools game. This is one of those lively upbeat songs so typical of bluegrass in which the message of the lyric sends quite a different message from the tune and the tempo. Bluegrass often wants to soften the blow by lightening the mood. The song allows Kenney to display effectively her emotional range.

The last cut on the CD, Unexpected Life, returns to the theme that pervades the disk, making the ordinary in relationships into something special and extraordinary.
When I count my blessings, they’re not things that I can hold,
You there every morning, it’s more precious than gold.
Sleepy smiles and slippered feet as the kids run down the hall,
This unexpected life we share, it’s the greatest gift of all.

Kenney keeps reminding us that while life isn’t always easy or without difficulties, persistence and shared commitment yield the small but real joys that make a fulfilled life.

rom Ms. Kenney. Her singing is first rate, melodious, full, and emotionally satisfying. Her melodies support and extend her lyrics. I’d like to hear her in a band setting where her voice is part of the bluegrass vocal trio, which she assures me happens when she appears with a band. On this CD, in addition to Stillman and Bloch, she is supported by Don Barry on Bass, and Eric Kilburn on mandolin and Dobro. She supplies her own guitar accompaniment on her 1973 Martin D18.

You can hear samples of Dawn’s songs on her web site and on her MySpace page. The entire CD or individual tracks can be bought from the home page of her web site.

All pictures come from Dawn's web site and will be removed upon request.