As I opened Harry Potter and the Deathly Hallows by J.K. Rowling

my first reaction was that it’s a really heavy book. The target audience for Harry Potter has grown up during the years since he was first introduced while I’ve grown old during the same period. A book this size hurts my art 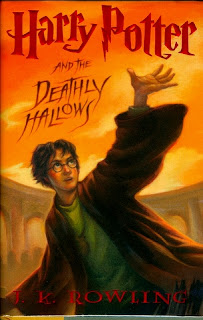 hritic old hands, making it difficult sometimes to keep reading. As I’ve watched Harry Potter grow up, it seems that I’ve been growing old. Nevertheless, from beginning to end, this series has managed to hold my interest. The other morning, as I wept my way towards the very satisfying completion of this huge undertaking, I found myself truly sorry to have reached the ending. It’s hard to say much more for such a long work.

The book contains a great deal of exposition. As Harry hides from Valdemort and his Death Eaters waiting for something to happen, characters show up to tell him what’s happening. Here Ms. Rowling defies one element of fine writing by telling rather than showing. As her action sequences are still as strong as ever, and the characterizations of Ron and Hermione remain consistent, it seems strange she had difficulty getting out and having these characters do something. Another overused device is the nearly endless series of articles in The Daily Prophet by news hen Reeta Skeeter. This character has moved from being a rather amusing and nasty witch to a place of adding too heavily padded exposition. It takes this book several hundred pages to get untracked. After an early very effective battle and escape sequence freeing Ron, Hermione, and Harry to complete their quest, the book bogs down for a rather long period in which the past is reprised and the future set up.
Any reasonably literate reader will find recognizable themes and antecedents in the Harry Potter series. The tales of Arthur, Frodo’s quest for the ring, the world’s search for a Savior – these elements of our collective memory resonate throughout the Potter books. Ideas of sin, redemption, forgiveness, good and evil, and the search for finding a balance in our lives run through these texts and are presented in a way that allows adults to enjoy them and young people to soak them up and luxuriate in them. While some have said and written that the existence of a favored group of people who can use magic to affect the world is un-religious or anti-religious, I cannot see this. What I see is a set of characters who must deal with pride, arrogance, doubt, innocence, wisdom, and ambition and all the other human characteristics we mu 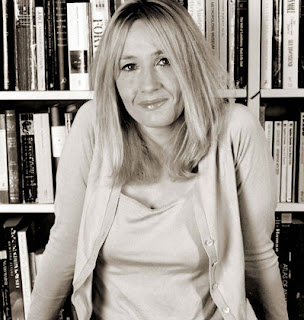 st balance to lead useful and fulfilling lives. By creating a magical world in which the rights of the less favored and weaker are exploited by powerful and cruel beings who seek to dominate through the misuse of power, Rowling has provided readers with a huge amount to chew on. The message of overcoming evil through selfless love comes through loud and clear. These books can be read as political screeds, but that, too, would be a mistake. The Harry Potter books are not populated by Nazis, fascists, communists, liberals, or conservatives. Within their pages live characters who struggle with their own baser instincts as well as the evil around them.
In this final Potter book, Rowling has tied up all the loose ends and answered questions that have arisen throughout the course of the stories. I particularly liked her final explication of Snapes’ story. As friends have seen me pull out Harry Potter and the Deathly Hallows, they’ve said things like, “I’ve heard rumors that Harry dies at the end,” and looked at me for a cue or clue to the way this book turns out. Well it really doesn’t matter, as the book itself triumphs. Even if you’re merely a Muggle, like me, the book will work its magic on you and on generations of young readers into the future.
Harry Potter and the Deathly Hallows

is published by Scholastic Books in the US, and has a price of $34.99 which is being pretty deeply discounted at this time. Current price at Amazon is $ 8.94.
Posted by Ted Lehmann at 10:36 AM